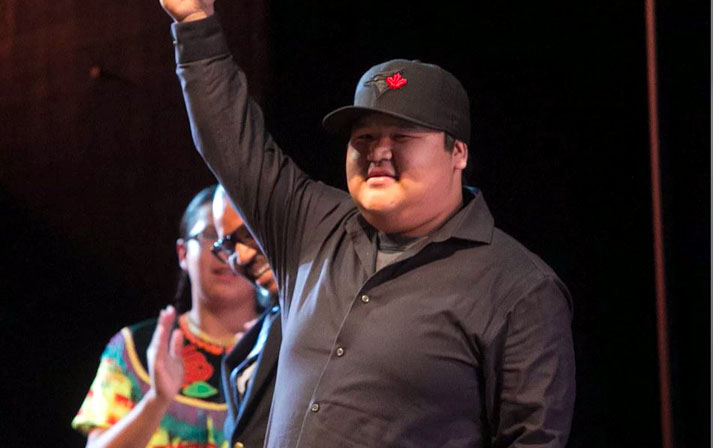 Tyler Hikoalok, 18, appeared in court today on a charge of first degree murder. The homeless young man had been working with a hip hop collective in Ottawa called Tr1be Music. (TR1BE WEB IMAGE)

An 18-year-old man who is originally from Cambridge Bay was charged with first-degree murder at an Ottawa courthouse this morning.

Elisabeth Salm was found, after she had been assaulted, in her office at the Christian Science Reading Room on Thursday at 12:30 p.m. and, according to police, she died from her injuries in hospital the next day.

Police arrested Hikoalok on Sunday afternoon. He appeared at the Ottawa court via a video link.

Hikoalok was homeless and living on the streets of Ottawa.

Community sources from Cambridge Bay suggested that he suffered from fetal alcohol syndrome, and that he had a particularly rough childhood in foster care.

“He was the sweetest, most damaged little person that ever crossed our world. He probably has no idea what he did,” said one Cambridge Bay source, who did not want their name published.

The source said Hikoalok was taken into care at a very early age and struggled while in foster homes.

In Ottawa, Hikoalok was part of a hip-hop music collective called Tr1be, which, according to its website, helps Indigenous artists to “break into the music industry.”

In his biography on the collective’s website, Hikoalok is described as an Inuk youth, who, at the age of nine, was removed from his community and put into foster care.

“Music has since been his therapy,” the website said.

“Using instrumentals as a way to stay motivated, music truly saved his life and helped to get him where he is now.”

The website also said that Tyler planned to set up a music program for youth in his hometown of Cambridge Bay.

Tr1be posted a note on Facebook to say that one of their artists was involved in “a terrible incident.”

“The intergenerational impact our young people are faced with is an epidemic that we try to address,” the message said.

“We do everything we can to help our youth restore balance while on their healing journey. Mental health issues cannot be ignored.”

Tr1be said it offered prayers and compassion for the family and community who lost a loved one.

“His actions are not acceptable and I hope he takes full responsibility for his actions.”

Hikoalok is due back in court for a bail hearing today.

The mandatory sentence for first-degree murder is life imprisonment, with no chance of applying for parole for 25 years.

The allegations that Hikoalok faces have yet to be proven in court.