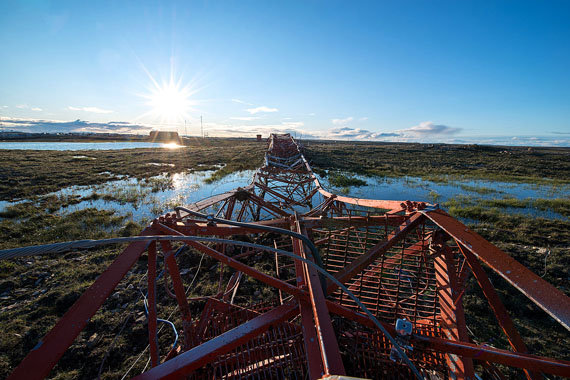 The toppled LORAN tower lays across the tundra outside of Cambridge Bay Aug. 6, a day after crews from Nav Canada demolished it.The 620-foot, or 189-metre long range navigation tower was built in the 1940s. But Nav Canada recently found the tower to be structurally unsound, and plan to replace it with a 160-foot, or 49-metre structure this October. (PHOTO BY DENISE LEBLEU IMAGES) 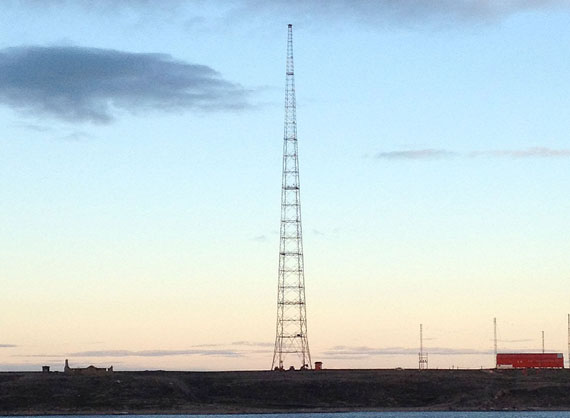 Here’s a last look at Cambridge Bay’s LORAN tower, in a photo taken at around 12:30 a.m. Aug. 5, just before it came tumbling down. (PHOTO COURTESY OF NUKA OLSEN-HAKONGAK)

“The reason it was taken down was that it had lost structural integrity and it was a danger to the public,” said Allen Cole, the president and chief executive officer of Kitnuna Corp.

Workers started tearing it down on the evening of Aug.4 and by Aug. 5, the community’s beloved landmark was gone.

The long range navigation, or LORAN tower, originally built for long range radio communications, was also used by aircraft and boats looking for a harbour.

The tower, built in 1947- 48, was used by many hunters and explorers around Cambridge Bay to find their way back into town.

“The tower was important to us,” said Cambridge Bay resident Jorgan Aitaok. “Especially at night and in the winter, we could see that for miles and miles, and you knew you’re close to home.”

But once the Hamlet of Cambridge Bay decided the $1 million price-tag to rebuild the structure was too high, Nav Canada hired Kitnuna to demolish the beloved tower.

“There was a lot of engineering to take down the tower,” said Cole. “We cut through two of the legs [approximately 20 feet off the ground] to weaken them, attached cables to them and then we pulled the legs out from underneath.”

From there, gravity did the rest.

About 300 Cambridge Bay residents formed in groups around the water to watch the six-man construction crew make the LORAN tower come tumbling down.

Many residents of the approximate 1,600-population town have the same concern: will Nav Canada’s new 49-metre tower measure up to the old one?

“I’m hoping it will be brighter with the new LED lighting, that way you can see the lights when further out on the land,” said Aitaok.

The new tower is scheduled to be built in late October, Nav Canada said. Even though it will be shorter than the original Loran tower, Cole assures Cambridge Bay residents it will be better.

“[The Loran tower] is being replaced with a tower that is more visible from further away,” he said.