“We find our backs against the wall” One of three buildings now under construction by Northview REIT in Cambridge Bay, with a total of 36 one- and two-bedroom units, some of which have been set aside for Government of Nunavut staff housing. (PHOTO BY JANE GEORGE) 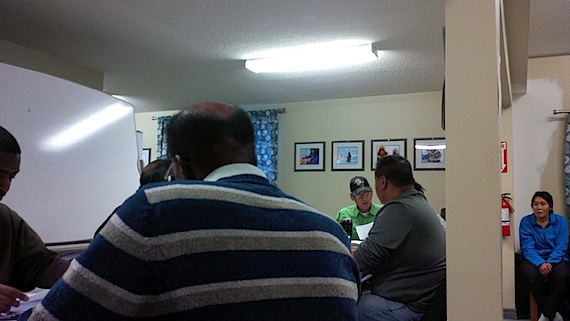 Harry Maksagak, centre in green, chairs the Cambridge Bay Housing Association, which met Sept. 30 to hear, among other things, from residents of the western Nunavut community on their housing-related concerns. (PHOTO BY JANE GEORGE)

CAMBRIDGE BAY—The Sept. 30 monthly board meeting of the Cambridge Bay Housing Association was a study in despair as people pleaded their case for a roof over their head in this social housing-starved town of roughly 1,700, where there are only 290 units, about 40 per cent fewer than needed.

Board members heard from a couple with a baby who sleeps with three or four relatives in a one-bedroom unit where you can hardly find a place on the floor to sleep.

A man with no place to call his own described how he walks around looking for a place to stay.

Those who spoke Sept. 30 clearly struggled to keep sheltered in Cambridge Bay where temperatures regularly drop to minus 50 C or lower during the dark months of the year, as the housing board tries to apply rules to a community housing crisis that defies rational solutions.

That’s because there are no public housing units to go around, and “this is not just Cambridge [Bay], this is Nunavut-wide,” Harry Maksagak, who chairs the housing association’s board.

During the Sept. 30 meeting, a young woman broke down in tears as she described her fear of what might happen when she has to leave Nunavut Arctic College student housing in June.

And a young couple, with three children, spoke about how they face eviction from their mother’s former public housing unit.

The man, dressed in a clean white T-shirt and worker’s overalls, spoke in an even voice to the board, explaining his family’s dilemma.

“We’re living at what used to be my mom’s unit and last Sunday we received an eviction notice and we got nowhere else to go,” he said. “Can we take her unit?”

He said last year, housing association officials had said they would be able to move to a two-bedroom house.

Then, after they had packed up and were ready to leave, they learned that wouldn’t work. They heard nothing more until they received the notice of eviction—because his mother was no longer living there and had moved into a subsidized staff unit.

But the housing association doesn’t usually transfer one unit to another person like that, they learned. He should have come to see about the transfer of his mother’s lease.

The board promised nevertheless to discuss the eviction.

“It’s only two weeks away,” said the man.

The real problem is that there are no vacant public housing units in Cambridge Bay—the 10-plex built last year was filled immediately.

And unless some of the 20 new units, now under construction for the Government of Nunavut by Northview REIT, or some of the 16 other units in the three-building complex are earmarked for social housing, there won’t be any new public housing units for Cambridge Bay this year.

The $2 million that public housing tenants in Cambridge Bay owe in arrears compounds that tight situation.

That’s why a man seeking a unit for his family was told he can’t apply for a new unit unless his spouse pays up her arrears.

“We find our backs against the wall,” said Maksagak. “Your partner has arrears, you can’t go into another unit. You could pay $1 a day. But we can’t take applications when one spouse is in arrears. If you could claw away at it… we’re not playing hardball, we’re just in a hard way.”

The “hard way” also includes the high cost of fixing some housing units, which some tenants trash.

“That’s what puts us behind and prevents us from having units,” Maksagak said.

This means some tenants end up over-housed with extra bedrooms, while others are stuffed into small places, but no one can move because it can take up to two months for renovations and there’s nowhere to put tenants during that period.

While people wait for public housing, sometimes for years, the association ranks them according to their length of time on the wait-list and their needs. There are more than 50 or so on the list.

The Hamlet of Cambridge Bay would like to build tiny homes to reduce numbers of people who need homes in a market where there are few options between public housing units and $400,000 private homes.

Meanwhile, Maksagak said he’s committed to “looking after our people the way they should be looked after—but by the same token they need to follow rules.”

As for that family of five who feared eviction, they’ll be able to remain in their unit until a three-bedroom unit becomes available.

Maksagak’s personal goal is to rebuild communication with tenants who, for three years, didn’t have a board to go to.

And he hopes they attend the housing association’s annual general meeting Oct. 25. 7 p.m. at the Luke Novoligak Community Hall.