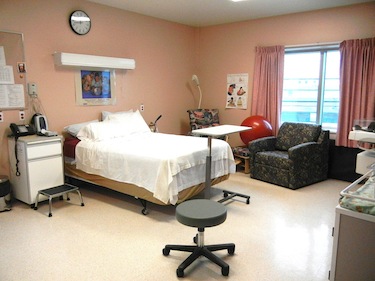 The Kitikmeot birthing centre in Cambridge Bay, located in the Kitikmeot health centre, has two well-equipped rooms for births. (PHOTO BY JANE GEORGE) 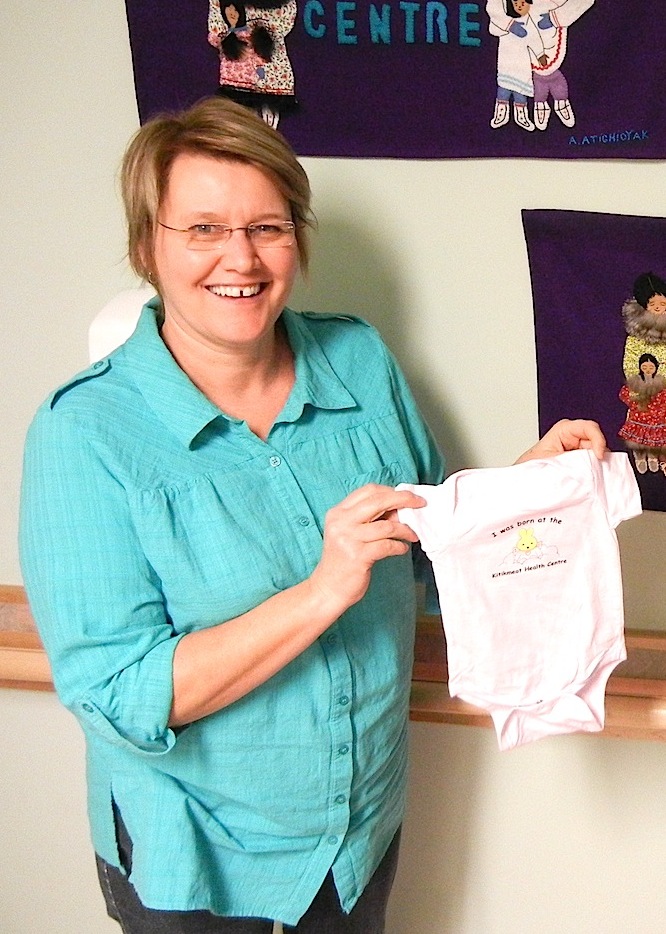 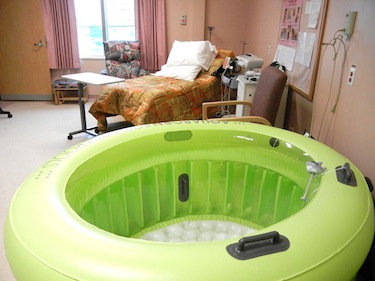 While no woman in labour has so far yet used the Kitikmeot birthing centre’s large green tub, when filled with warm water, midwives say it can be a comfortable place where women can float to relieve labour pains. (PHOTO BY JANE GEORGE)

CAMBRIDGE BAY — Since 2010, 16 babies have taken their first breaths at midwife-accompanied births in Cambridge Bay.

That’s not a large number of births for the new Kitikmeot birthing centre, but Meaghan Moon, the midwifery manager in Cambridge Bay, expects to see much more use of its two-room unit over the next year.

Since Moon first came to the community in early 2010, she’s seen the Kitikmeot birthing centre’s midwives expand their services, from offering prenatal and postnatal care to performing deliveries.

“I think we’re doing great we’ve grown really quickly. The service is well received, we’re well-supported by staff in the centre, women seem to enjoy the service,” she said.

Midwives from the birthing centre have also started to visit other Kitikmeot communicies.

And, thanks to the presence of a new portable ultrasound machine and trained technician in Cambridge Bay, the Kitikmeot health centre can also perform ultrasounds on all pregnant women.

About 30 babies are due to local women in April, 2011, Moon said — and that means the birthing centre’s two midwives will be busy.

But that’s good, she said, because more babies are just what this centre needs.

“We need to get women in Cambridge Bay, who are low risk, to see the benefits of birthing here, and to encourage women from the [other] communities who are low risk to come and birth here.”

More births would mean be that midwives practicing in Cambridge Bay could assist at the number of births required to keep their licenses.

As it stands now, they can’t rack up the 50 births they need over a five-year period, first to become registered as midwives, and then to keep their licenses.

“Nunavut is now regulated jurisdiction [for midwifery], and there are requirements we need to meet in order to maintain our registration, and part of that is to reach a certain number of births,” Moon said. “We need to sort out how we’re to retain midwives given what the numbers are currently.”

Moon said all remote regions of Canada have the same challenge, with respect to the low number of births midwives practicing there see — and she hopes that someday there will be more recognition given to that reality.

Some of these midwives have practiced before in Cambridge Bay, or in Rankin inlet, or in Nunavik, where Puvirnituq’s Inuulitsivik maternity unit has been delivering babies — and training local midwives — since the late 1980s.

Increasing the numbers of births at the Kitikmeot health centre would be easy if most of the 100 women who give birth every year in the Kitikmeot delivered in Cambridge Bay, Moon said.

But pregnant women in the Kitikmeot, who are considered to be at low risk of complications, still have the choice of going to Yellowknife to give birth.

The major hurdle facing the Kitikmeot birthing centre remains convincing these women that they’ll have as good — or better — birthing experience close to home.

“Culturally we made a shift, saying it was better to be in a hospital environment for birth, and maybe all the ramifications weren’t thought forward enough,” Moon said. “But it’s what happened. Now that we know it’s safe for some people to give birth safely in their home communities.”

More births would also open the door to hiring full-time midwives and a third midwife to join the centre.

Then, its team could work closely with the first crop of students from the Nunavut Arctic College maternity care and midwifery program now underway in Cambridge Bay.