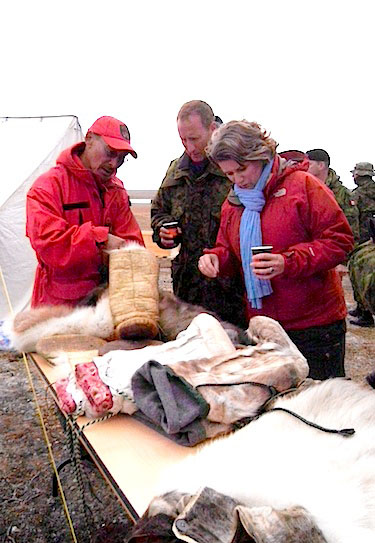 During the exercise, the Danes gained experience about snowmobiling, “where the Canadian Rangers have extensive experience,” according to a Danish news release on the exercise — which was not publicized in Canada.

Exercise participants also took a trip on the land, where they set up a camp to test polar bear alarms and other survival skills.

In Greenland, Danish soldiers generally travel by dog team, and they’re used to being warned about the presence of polar bears by their dogs.

But, travelling by snowmobiles during this exercise, they learned how to rely on an alarm and tripwire instead, the news release said.

The Canadians and Danes also carried out a mock search-and-rescue operation during the exercise, which took place March 2 to March 16 near Mestersvig, a military outpost with a 1,800 metre-gravel runway, on the southern shore of the King Oscar Fiord in the Northeast Greenland National Park.

Arctic Training 2012 flows from an agreement Denmark and Canada signed in May 2010.

That memorandum of understanding “on enhanced operational defence cooperation in the Arctic,” such as joint military exercises, staff exchanges and co-operation in rescue operations, led to Denmark’s participation in last year’s Nunalivut exercise.

In August 2011, it also brought the head of the Danish Armed Forces and Denmark’s defence minister, along with Peter Mackay, Canada’s national defence minister, on short visits to Resolute Bay to see Operation Nanook.

Denmark’s defence minister, Gitte Lillelund Bech said then that Denmark and Canada planned on more co-operation to find solutions to their shared challenges, like climate change and increased marine traffic.

Bech also wanted to learn more about the Canadian Rangers, an example she said that Denmark is looking closely at for Greenland, where there are only special units from the Danish army patrolling the island.

“We can share and learn from each other,” Bech told Nunatsiaq News.

Denmark has also said it wants to be involved in a new “Arctic Command” for Arctic defense — which could involve Canada and build up its own Arctic Response Force, similar to what Canada is already doing, with its Arctic Response Company Group, which participated in Op Nanook.