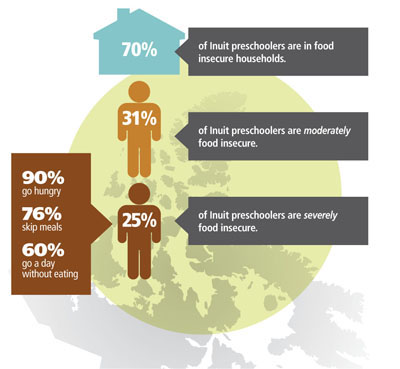 This graph illustrates some of the old news contained in a big Aboriginal food security report released March 27 by the Council of Canadian Academies. The information shown here was first reported in 2009. (IMAGE FROM COUNCIL OF CANADIAN ACADEMIES)

A new compilation of numerous existing studies finds what most northern Canadians already know: nutritious food is expensive in the Arctic and too many people don’t get enough of it.

An Ottawa-based body called the Council of Canadian Academies released the study March 27 in Ottawa.

“Beyond the price of groceries, food security is a complex issue of human health and well-being that requires multiple solutions,” said a summary of the report, which contains little new information.

The 296-page document, compiled by a squadron of 14 academics, collects, re-packages and analyzes research work done in the past.

For example, they cite research from the 2007-08 Inuit health survey that was first reported in 2009.

That includes the oft-quoted findings that about seven in 10 Nunavut families don’t get enough to eat for at least part of the year and that about three in five Nunavut children go hungry.

What those abstract numbers add up to is that Inuit in Nunavut suffer more hunger and want than any other indigenous people anywhere in the developed world.

But they found that other northern Aboriginal peoples also suffer.

For example, they quote a First Nations regional health survey, done by the Dene Nation in the Northwest Territories, that found 90 per cent of respondents reporting some kind of food shortage.

And they cited another study that found 75 per cent of people in 14 Aboriginal communities located north of Thompson, Manitoba reported they were food insecure sometimes.

The council did its work in response to an October 2011 request from Leona Aglukkaq, then the federal health minister, to answer questions about what factors affect food security for northern aboriginal people and to point out any gaps in existing knowledge.

In response, the council set up its expert panel, chaired by Harriet Kuhnlein, the founding director of the Centre for Indigenous Peoples’ Nutrition and Environment at McGill University.

They found there is no one-size-fits-all solution to Aboriginal food insecurity across northern Canada.

“A range of programs and policies will help reduce food insecurity,” a summary of the report said.

And in a chapter that lists approaches taken across the circumpolar world, the study cites the open air country food markets that are common in Greenland.

In reaction to the report, the Inuit Tapiriit Kanatami said it confirms that for Inuit in northern Canada, getting enough to eat is a “significant struggle.”

To that end, ITK calls for collaborative work between communities, Inuit organizations, governments and researchers.

The full report and related documents are available here.

Below, you can find an executive summary of the report.