“Limited but suited to the threats they face” 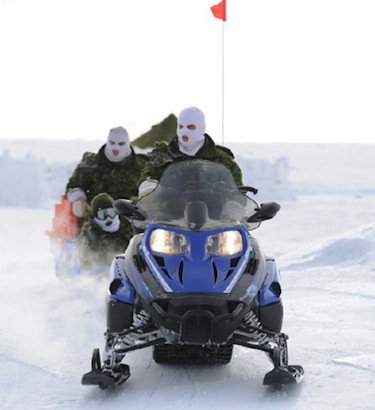 An Arctic Response Company Group advances to its next position during Exercise Guerrier Nordique in Iqaluit in March 2014. (PHOTO COURTESY DND, BY CPL. VALERIE VILLENEUVE) Canadian Rangers like these near Resolute Bay on an military exercise are an effective first response unit in Canada’s North, a new report on the Canadian Armed Forces says. (PHOTO BY JANE GEORGE) Drones, like this one undergoing testing near Resolute Bay in 2011, could be part of Canada’s future Arctic defence support. (PHOTO BY JANE GEORGE)

The Canadian Armed Forces is on the right track in its Arctic defence strategy, which uses a “focused and cost-effective system” to handle sovereignty and security threats in the Arctic, says a new policy report from the Canadian Defence and Foreign Affairs Institute.

“It is designed with Canada’s limited resources in mind and for the sort of sovereignty and security threats that the country is likely to face in the coming years,” says the report from the Canadian Defence and Foreign Affairs Institute, called “The Canadian Armed Forces in the Arctic: Purpose, Capabilities, and Requirements.”

“Canada’s military capabilities, as they exist today and as they are developing, are limited but suited to the threats they face,” says author Adam Lajeunesse in his report.

The Canadian Armed Forces decision to go with small, self-sufficient units, like the Canadian Rangers, in the Arctic makes sense, Lajeunesse says. That’s because the well-trained reserve and permanent force units are designed for rapid and flexible response work.

“The Army can now, theoretically, deploy a staggered series of responders anywhere in the North to reinforce the ever capable Rangers, or deploy to an area without a Ranger patrol. This capability is limited in size but appropriate to the sorts of threats envisioned,” Lajeunesse says.

Here’s how Lajeunesse’s report says a response would work in the event of a situation requiring the Canadian Armed Forces:

• Rangers would almost inevitably be the first responders — however, given their lack of resources, and because they are spread so thinly across the North, they would likely require support; so,

• an Army Initial Reaction Unit would deploy a four-person reconnaissance unit within eight hours, a “vanguard company” of 12 people within 12 hours, and the main support body of 32 people within 24 hours.

“This layered response system makes sense and real progress has been made in building a basic capability, designed around realistic security threats.The Army has a growing supply of soldiers trained up to the point that they will be useful on an Arctic deployment and it can conduct small-scale deployments and tactical movements while self-sustaining for nearly three weeks,” Lajeunesse says.

As for Canada’s Navy, it has also stepped up Arctic operations to rebuild the expertise it lost after the end of the Cold War, Lajeunesse says.

“Technical issues surrounding communications, supply, and maintenance remain, but real progress has been made,” he says.

The planned fleet of Arctic offshore patrol ships are part of that progress — and it’s not a problem that the ships’ completion and the opening of the refuelling station in Nanisivik have been delayed because the projects were “undertaken in anticipation of a need, rather than in response to any existing requirement.”

“If and when Arctic shipping activity increases dramatically (likely as resource projects come online), the RCN [Royal Canadian Navy] will require a greater presence to monitor, police, and assist vessel traffic. However, that activity has not yet materialized and, by the time if does, these programs should be far more advanced. In the meantime, Canada’s current naval resources are perfectly adequate,” Lajeunesse says, adding that some new technology is on the way.

Canada plans to increase maritime surveillance from above, by launching three more RADARSAT satellites in 2018, allowing for several more passes per day over the Northwest Passage.

And Canada is also considering the use of drones to supplement its surveillance capabilities: these need less maintenance and manpower than traditional aircraft, and could be used economically in everything from from tracking ships to monitoring pollution incidents, Lajeunesse says.

Canada will also need to maintain a small fighter force stationed in the North, ready to escort Russian planes out of its “Air Defence Identification Zone” or to intercept the planes if they violate Canadian airspace — this is a duty easily managed by the existing fleet of CF-18s operating from its four forward operating locations in the North, his report said.