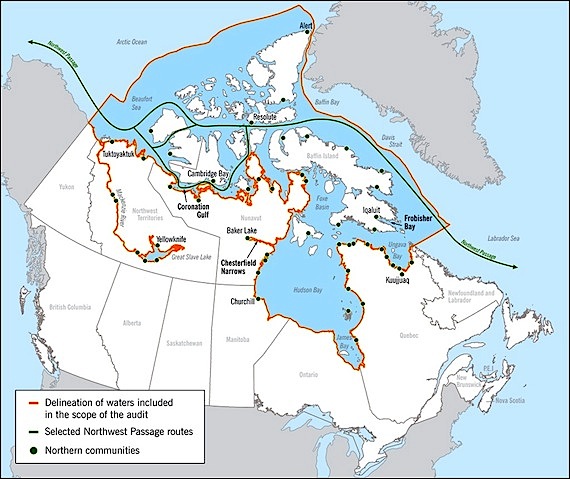 This map from the auditor’s report on marine safety in the Canadian Arctic shows the area looked at by the report. 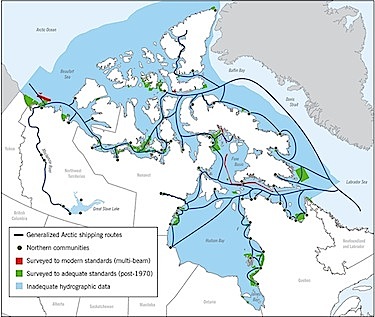 This map from the auditor’s report on marine safety in the Canadian Arctic shows in red, the shipping routes surveyed to modern standards, in green, those surveyed to adequate standards and in blue, those with inadequate hydrographic data. 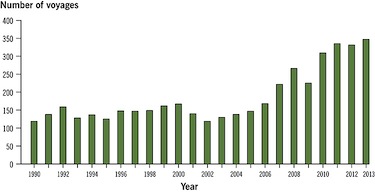 This graph from the auditor’s report on marine safety in the Canadian Arctic shows the number of voyages through the Northwest Passage from 1990 to 2013.

The answer is a clear “no.”

“We found that the lack of elements related to marine transportation in Canada’s Northern Strategy is inconsistent with its priority as current chair of the Arctic Council,” the report said.

This includes “elements” such as charting and hydrography, aids to navigation, weather and ice information, icebreaking, vessel detection, and ship design and construction standards.

“In our view, this is a significant gap, given the importance of marine transportation to economic development and to communities in the North,” the environment commissioner said.

The report also found that no federal department has developed a co-ordinated strategy aimed at improving marine safety in the Arctic.

Potential dangers posed by major fuel spills and damage to vessels, people and the environment are only likely to increase with more ship traffic, the audit suggests.

Between 2002 and 2013, about 100 spills from vessels, mainly diesel fuel and gasoline spills, smaller than 30 cubic metres, took place in Canadian Arctic waters, according to Canadian Coast Guard data cited in the audit.

“We found gaps and emerging risks that, if left unaddressed, will only grow as marine traffic increases in the region,” said Gelfand said in her audit.

Gelfand’s audit comes down particularly hard on Canada’s aging and inadequate fleet of Canadian Coast Guard icebreakers, which are usually looked on to provide help for search and rescue operations, environmental response, aids to navigation, fisheries enforcement and science in Canada’s Arctic waters.

Overall, the report found the Coast Guard’s icebreaking presence in the Arctic has decreased. That’s in spite of vessel traffic that Environment Canada expects to nearly double by 2020, mainly due to mining activities, to about 300 sailings a year.

The report says the Coast Guard does not even know “whether the services it provides meet the needs of users” and has “not assessed the risks that decreasing icebreaker presence may pose for safe navigation in the Arctic.”

The Coast Guard’s six icebreakers now in service are, on average, more than 30 years old, approaching the end of their operational lives — and “at most” five icebreakers will be available for service nearly every season until 2021.

“This reduced presence in the Arctic means that icebreakers serving the region may have to cover more territory and may take longer to respond to user requests for icebreaking services,” the report notes.

Among the other big problems: a “significant gap in the area of surveying and charting — a foundational requirement of safe navigation.”

While the audit found some annual improvement in surveys and charts, it determined that many higher-risk navigation areas of the Canadian Arctic are inadequately surveyed and charted.

This is troubling because “northern remote communities depend on marine transportation for supplies and fuel, yet many of these communities do not have adequate inshore charts,” the report says.

“Although it is not reasonable to expect the entire Arctic to be surveyed to modern standards today, we did expect there to be reliable information for the higher-risk areas of the Arctic, where vessel traffic is most prevalent, such as approaches to northern communities.”

But improvements in mapping or to Coast Guard icebreaker services won’t come until long-term implementation plans are ready in 2018, the auditor heard.

But it suggested four areas should be improved to improve short and medium term to prepare for future increases in vessel traffic: detecting hazardous and noxious substances, accessing satellite imagery, and tracking vessels which are not legally required to report their presence.

In short, the auditor said “we are concerned that the Government of Canada may not be prepared to deal with increased ship traffic in the future.”