The CCGS Amundsen plows through early August ice in the Northwest Passage. But Canada needs more than new icebreakers — it also needs a new framework for Arctic marine traffic which would see more Inuit input and involvement, a new report from the Pew Charitable Trust says. (PHOTO BY JANE GEORGE) 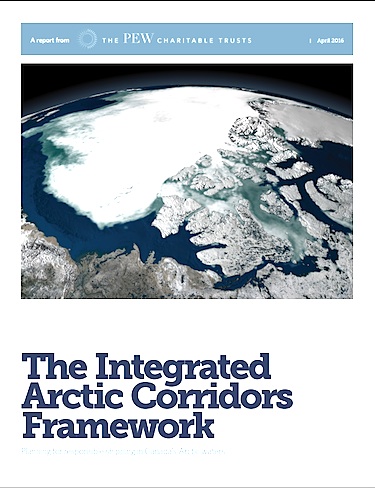 The Canadian Arctic needs a new framework and management plan with more Inuit involvement for its Arctic seaways, an environmental watchdog says.

The Pew Charitable Trusts on April 5 released an analysis of shipping patterns in the Canadian Arctic Ocean and called for a new approach to handling increased marine traffic expected in the region.

The report comes as marine traffic through the Northwest Passage, which has already more than doubled over the past 10 years, will see the cruise ship Crystal Serenity travel from Alaska to Greenland, with 1,600 passengers and crew.

The focus to date from groups has been for upgrades to the Canadian Coast Guard’s aging icebreaker fleet.

The framework would create shipping corridors which would integrate shipping and ice data, wildlife migration routes, habitat areas and human use, including Inuit traditional knowledge.

“Importantly, the framework would be built to adapt as conditions change in this dynamic and complex area,” the 37-page Pew report said.

The 2010 groundings of the cruise ship, the Clipper Adventurer, and the Nanny, carrying 9.5 million litres of diesel fuel, reveal the shortcomings of the current management of marine traffic in Canada’s Arctic, notes the report.

Shipping corridors are now based largely on current use patterns and marine safety, “with limited consideration of environmental protection and Inuit rights,” it said.

The Integrated Arctic Corridors Framework, “if done effectively,” would see less shipping through the Canadian Arctic’s “most sensitive ecological areas, provide protection for Inuit traditional use, and deliver safe and practical choices for mariners.”

Under an Integrated Arctic Corridors Framework, shipping corridors would fall into various categories according to their assessed risk.

“The plan will help Canada improve human and vessel safety in Arctic waters, empower Inuit organizations to ensure that Arctic shipping enhances instead of threatens their long-term well-being, reduce risk to the environment, and give mariners the guidance and tools necessary to allow ships to travel the safest possible route,” the report said.

But to work, the framework also needs a new management structure, the Canadian Arctic Corridors Commission, co-chaired by Inuit and governments, which would develop “a vision” for Canadian Arctic shipping.

This would include the development of those integrated corridors. The commission would then become the permanent management body responsible for overseeing this system.

The commission would, among other things, support and monitor safe marine traffic and adapt to change to “create a safer shipping environment for all vessels operating within the corridor system.”

But there’s likely a big cost to the creation of this new commission and framework, which the Pew Trust did not address in its report.

The federal government would have to find money for more research on shipping corridors, marine mammals and the environment, as well as for an Arctic monitoring system to carry out the report’s recommendations.

Meanwhile, others want to see Ottawa put money into infrastructure, such as commissioning more new icebreakers: The Shipping Federation of Canada called March 31 for a plan to update Canada’s icebreaker fleet, saying “the current plan to rely on the construction of a single polar class icebreaker, which was commissioned by the previous government at a cost of over $1 billion for delivery in 2022 at the earliest, is not a viable solution.”

And Transport Canada commissioned a recently-tabled independent review, which says the Canadian Coast Guard needs more money and more icebreakers to deal with the increased marine traffic in the Arctic — “including the purchase of a minimum of one polar and two heavy icebreakers, and provision of associated operating costs.”

You can read the full Pew report here.