“Our government supports the promotion of basic values — freedom, democracy, human rights and the rule of law,” says Aglukkaq 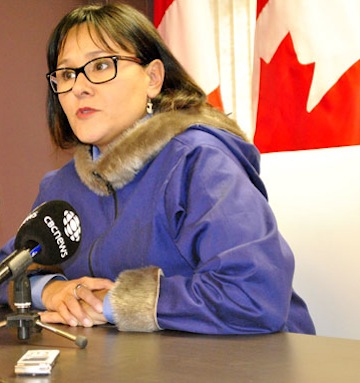 “Our government supports the promotion of basic values — freedom, democracy, human rights and the rule of law,” says Nunavut MP Leona Aglukkaq, who is also the federal minister responsible for the Arctic Council, shown here at a recent meeting on the Arctic Council, which took place in Iqaluit. (FILE PHOTO)

Ministers from Canada and Norway, along with Arctic Parliamentarians, want the Russian Association of Indigenous Peoples of the North, Siberia and Far East back at the Arctic Council.

Canadian officials will continue to monitor what happens to the RAIPON, says Nunavut MP Leona Aglukkaq, also the federal minister responsible for the Arctic Council.

That comment follows a recent move by Russia’s ministry of Justice to suspend the operations of RAIPON, a move that came under fire at a meeting of the Arctic Council this past week in Haparanda, Sweden.

Aglukkaq’s statement echoes that of the Nov. 14 statement from senior Arctic officials from the Arctic Council’s eight member nations — including Russia — and from the other five indigenous Arctic organizations which sit as permanent participants on the council.

Their statement expressed concern about the suspension and its impact on RAIPON’s absence at the council, asking “the Ministry of Justice of the Russian Federation to facilitate, as appropriate, the fulfilment of RAIPON’s important role as a permanent participant in the Arctic Council.”

Aglukkaq said Canada and other Arctic states asked Russia and RAIPON “to resolve the situation, and to ensure that RAIPON is able to play its important role as one of the six indigenous Permanent Participant organizations of the Arctic Council.”

Aglukkaq said RAIPON’s inclusion in the Arctic Council provides “an opportunity for active involvement and participation on common Arctic issues that affect northern Peoples and communities.”

She said Canada values the role of six permanent participants at the Arctic Council, which also include the Inuit Circumpolar Council, the Saami Council, the Arctic Athabaskan Council and the Gwich’in Council International.

Canada has committed, through Canada’s Arctic foreign policy, to continue supporting their involvement in the Arctic Council, she said.

Norway’s minister of foreign affairs, Espen Barth Eide, has also said he hopes that RAIPON’s current situation will be resolved.

Eide told the Norwegian enviromental group Bellona that the involvement of indigenous peoples is a key pillar in Arctic cooperation that is “impossible to remove.”

The conference of Parliamentarians of the Arctic has asked its Russian members “to encourage the ministry of justice and RAIPON to work together to solve potential legal issues and find a solution to the problem.”

A news release from the Russian Agency of Social Information said the ministry found that “not all regional offices of the association are legal entities” and concluded that RAIPON’s “activities are illegal,” suspending its operations with a court order earlier this month.