Photographer Clare Kines stands in front of the Nunavut stamp, which features his image of Leah Ejangiaq Kines, his wife, at the May 30 unveiling of the new Canada Post stamp in the Nunavut Legislature’s foyer. (PHOTO BY JANE GEORGE) 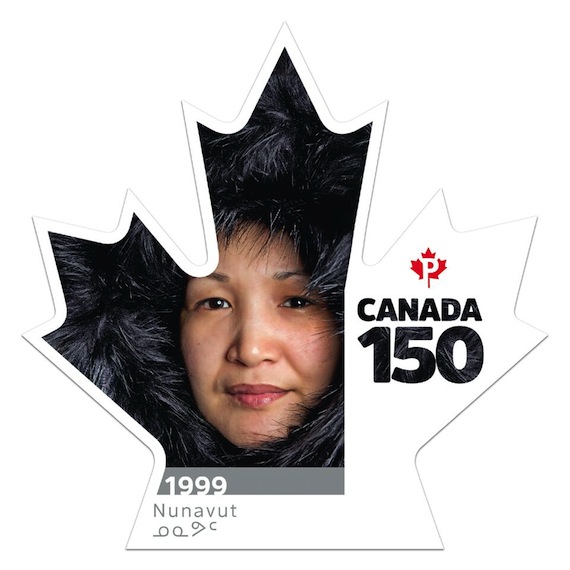 The Nunavut stamp features an image of Leah Ejangiaq Kines, photographed by her husband Clare Kines, who both live in Arctic Bay. (HANDOUT PHOTO)

Next time you buy stamps, ask Canada Post for the Nunavut special.

You just might see someone you know on the stamp, issued by Canada Post as part of Canada’s 150th anniversary celebrations in 2017.

The stamp, unveiled May 30 in Iqaluit, features the image of Leah Ejangiaq Kines, photographed by her husband Clare Kines, both of Arctic Bay,

Leah’s face, framed by a fur-trimmed hood, is set into a maple leaf on the stamp.

“I was very proud, and beyond proud of the cachet that comes from having a photo on a stamp,” said Kines, who is a frequent contributor of photos to Nunatsiaq News.

“Very proud that it was a photo of my wife that would be shared with the country, proud that there is a stamp honouring the place I call home, and proud because my family has three generations of postmasters and over 97 years in my home town post office.”

Leah is “proud, honoured and a little overwhelmed” by the attention surrounding the unveiling of the stamp, he said.

The unveiling took place in the foyer of the Nunavut Legislature in an event attended by Nunavut politicians, a group of visiting Parliamentary interns, and local post office employees.

One of 10 stamps showcasing significant events since Canada’s centennial, the Nunavut stamp is intended to celebrate the first major change to the political map of Canada since Newfoundland and Labrador joined Confederation in 1949—the creation of Nunavut in 1999.

The location of the launch site for each stamp of the 10 new stamps also relates to the moment being commemorated, so Montreal for Expo 67 and St. John’s, Nfld. for Terry Fox and his Marathon of Hope.

Nunavut Commissioner Nellie Kusugak and Nunavut Premier Peter Taptuna, who both spoke at the Iqaluit unveiling, praised the Nunavut stamp as a celebration of the territory’s creation and its choice for inclusion among the 10 great moments of achievement in Canada since 1967.

Deepak Chopra, the CEO and president of Canada Post, said the “iconic” image on the Nunavut stamp is important for the “next generation and current generation and new Canadians to understand how Canada has evolved.”‘

The stamps are available in booklets of eight and 10, and gummed panes of 10 stamps.

You’ll also be able to see the stamp’s image reproduced on a First Air jet.

It’s not the first of Kine’s images to be featured on an aircraft: A reproduction of a photo of an Arctic hare has decorated the tail fin of a First Air ATR-42 turboprop passenger aircraft since 2012.

Kines who has lived in Arctic Bay for 16 years, originally came with the RCMP to the community where he completed four years of his service there before “retiring.” On his website Kines describes himself as a “husband, a father, a writer, a birder, and during the working week, the Hamlet of Arctic Bay’s Economic Development Officer.”