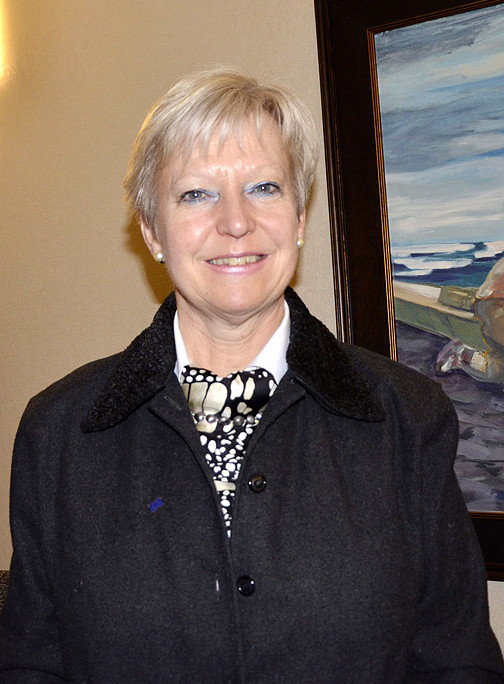 Marie-Anne Coninsx, the EU’s ambassador to Canada, says the new trade agreement between Canada and the EU will benefit Nunavut’s fishery and mining sectors. (PHOTO BY DAVID MURPHY)

There’s an exemption to the European Union seal products ban if Canada wants it.

That’s the message from Marie-Anne Coninsx, the EU ambassador to Canada, who stopped by Iqaluit Feb. 27 and 28 to meet with public officials.

“The legislation of the European Union explicitly foresees the possibility of an exemption for the seal [ban], which is hunted in a traditional way,” Coninsx said.

Groups such as Inuit Tapiriit Kanatami and the Fur Institute say this exemption is meaningless because the EU ban destroys the seal market for all producers.

But Coninsx says it works — just look at Greenland.

“The exemption already works with Greenland. The trade is permitted of seals that [are] traditionally hunted,” Coninsx said.

“And only since last year when the exemption has been put in practice, the trade has gone up, I must admit from a very low percentage, but [has] gone up 50 per cent,” she said.

“Now some might say a situation in Nunavut is not the same situation in Greenland. It might be. But let’s discuss it.”

Coninsx has offered to meet with federal officials about activating this exemption, but hasn’t received much of a response — even though it’s Canada’s responsibility to start discussions about the seal ban, said Manfred Auster, head of political public affairs for the EU delegation.

“Ownership is with the country that wants to use the exemption. It is Canada that [needs] to come to us and say we want it,” Auster said.

Coninsx said she spoke to the federal environment minister, Leona Aglukkaq, “recently” about this exemption, but she said Aglukkaq’s department doesn’t deal with the issue anymore.

She was then referred to Fisheries and Oceans Canada.

“I have immediately asked for a meeting with the minister of fisheries. But I have not yet got an appointment. I am confident I can get one,” Coninsx said.

Coninsx questioned negative perceptions of the EU because of the ban. She said several other countries, including the U.S. and Russia, have imposed seal import bans with no exemptions.

“So we are seen as the bad guys, although we have the possibility of an exemption that we would like, at least, it would be discussed,” she said.

Coninsx said activating the exemption would involve creation of a certification procedure, and a local authority to issue certificates.

“That’s a very technical issue, but it’s do-able,” she said.

Chair of the Arctic Council and Nunavut MP Leona Aglukkaq said in May that she wants a permanent resolution of the EU’s ban on seal products.

The European Union is keen to earn observer status at the Arctic Council, but so far their efforts have been denied, partly because of the seal skin spat.

Coninsx suggested activating the seal ban exemption, and getting Nunavut seal skins to market in European countries, might help build bridges and strengthen relations between the EU and the Arctic.

“This would be a very, very strong signal.”

While the seal skin debate rolls on, it appears there is no debate when it comes to Canada’s new trade relationship with the EU and the potential for Nunavut rewards.

Coninsx mentioned how Canada has become a “strategic partner” of the EU and the recent signing of the Comprehensive Economic and Trade Agreement, or CETA, between the two economic zones in October 2013.

“It will have an immediate effect in the sense that products from the mining that will be exported to Europe will be without tariffs,” she said.

CETA also eliminated the 25 per cent tariff on fish exports to Europe, she said. which could also benefit Nunavut.

In addition, under the new CETA rules, non-Canadian investors may now become 100 per cent owners of mining projects in Nunavut. Before, they needed to partner with a business that had at least 51 per cent ownership.

“That will be an additional attraction for EU enterprises. It will facilitate investment here,” Coninsx said.

Coninsx pointed to the EU’s commitment to science and technology as well, saying it has put millions of euros into Arctic research, mostly involving environment and climate change.

“We think we fulfilled the conditions to be a full-fledged observer member. We have already member states that are Arctic,” Coninsx said.

During her time in Iqaluit Coninsx met with Nunavut Premier Peter Taptuna. They met to speak about the benefits of CETA, and also “to get to know each other.”

She also met with students at Nunavut Arctic College Feb. 28.