Canada to lose its “PEARL” of Arctic research 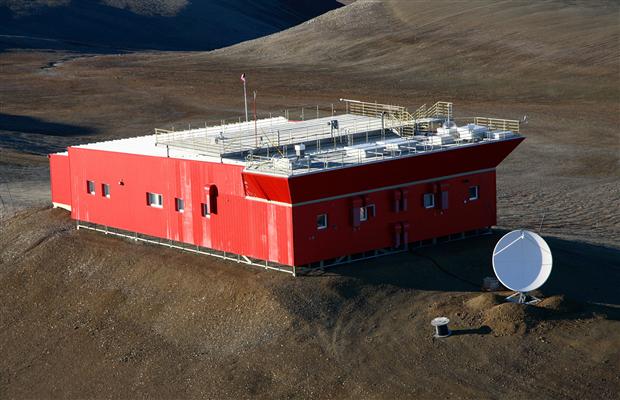 Canada’s most northerly research station is ceasing year-round operation, a “draconian” move decried by scientists both nationally and internationally.

“Its closure shows a stunning lack of interest on the part of the Canadian government in long-term Arctic issues,” atmospheric scientist Jim Drummond, at Dalhousie University, said of the loss of the Polar Environment Atmospheric Research Laboratory.

Drummond and his colleagues announced Tuesday that PEARL, as the lab on Nunavut’s northern Ellesmere Island is called, will stop operating continuously at the end of April due to lack of funding.

A network of university and government researchers has operated the lab since 2005. It costs $1.5 million a year to run, but the federal government has eliminated the atmospheric research program that had been funding the operation. And a proposal to keep PEARL going as part of a Canadian Advanced Polar Science Network was recently turned down.

PEARL has operated continuously since 2005, gathering data on air quality, atmospheric chemistry, ozone and climate changes. It is linked to many national and international programs and networks.

“This loss comes at a highly significant time when Arctic conditions are changing rapidly: Witness the recent rapid loss of permafrost, the appearance of the first large Arctic ozone depletion last year and many other harbingers of significant Arctic change,” the researchers said in a statement Tuesday.

“Without PEARL there will be no continuous active measurements in the High Arctic of many atmospheric quantities scientists believe greatly affect both our Arctic and the whole planet.”

NDP MP Dennis Bevington, representing the Western Arctic riding in the Northwest Territories, denounced the ending of PEARL’s year-round operations in the House of Commons Tuesday suggesting the decision was “based on the whims” of Prime Minister Stephen Harper instead of advice from leading scientists.

“After significant investment into this world-renowned atmospheric research station in the High Arctic, the Conservatives are slashing funding,” Bevington said.

Environment Minister Peter Kent responded, saying his department has provided “partial funding” for PEARL since 2009 and had supported the scientists’ recent, but unsuccessful, bid for renewed funding through the national Centres of Excellence competition.

Drummond said the proposal was to use PEARL to help expand Arctic science and train manpower until the government’s new Arctic research station in Cambridge Bay opens in 2017. The Network of Centres of Excellence program recently turned down the $35-million, five-year proposal.

With no other funding sources in sight, the researchers say they have no choice but to cease year-round operations.

“We have gone on as long as we can trying to keep it going, and we’ve now hit the wall,” Drummond said in an interview with Postmedia News.

The lab, which has been operated by a staff of four, may still be used periodically when researchers have grants to pay for specific projects. But Drummond said the closure will put an end to continuous monitoring and “the deep science” exploring the mysteries of the long, dark polar winter and the dramatic changes in the atmosphere as the seasons change.

PEARL also has the most northerly Internet installation on the planet, was being used by Canadian astronomers working on the world’s most northerly telescope, and has been piloting high-latitude-high-frequency communications in collaboration with the Canadian Space Agency.

Drummond said Canadians do not seem to realize how such science contributes to Arctic sovereignty.

“Having an occupied station 365 days a year, doing world-class science, participating at international conferences, putting papers into the international literature and being the go-to place when international groups want to come and do research in the Arctic — these things enhance Canada’s sovereignty very considerably,” he said. “And I don’t think that’s really understood.”

The demise of PEARL will not only affect Canadian but global science programs.

“This will have a negative impact on our ability to detect changes in carbon emissions in the Arctic, and on our ability to validate high-latitude space-based measurements,” said U.S. atmospheric scientist Paul Wennberg, at CalTech.

“The closure of PEARL will eliminate a unique set of High Arctic water vapour measurements that are essential to our global effort to better understand the atmospheric water cycle and its links to climate,” said Matthias Schneider, of Germany’s Karlsruhe Institute of Technology.

Biologist and acclaimed Arctic researcher John Smol, at Queen’s University in Kingston, Ont., said it is a “real shame” to be closing PEARL as the Arctic is responding more quickly than any part of the planet to global warming.

“It’s really the most sensitive part of the world,” said Smol.

“Canada has a tremendous amount of real estate is the Arctic,” he said. “About half our land mass is there and we are responsible for knowing what is happening there. And to do that, you need to monitor.”