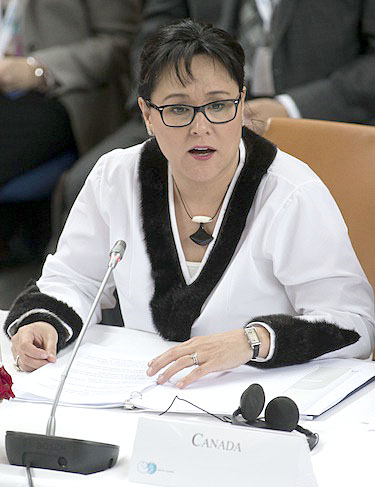 Nunavut MP Leona Aglukkaq, the head of Canada’s Arctic Council chairmanship, told reporters May 15 that she wants to seek a permanent resolution to the dispute between Canada and the European Union over the EU’s ban on the importation of seal products.

At the May 15 Kiruna ministerial meeting, the Arctic Council’s member states, who must make decisions by consensus, deferred the granting of observer status to the EU until after “the concerns of Council members” are resolved.

At the same time, they did grant observer status to Italy and five big Asian powers: China, Indian, Japan, South Korea and Singapore.

They join six other non-Arctic countries that were granted observer status at previous meetings: France, Germany, the Netherlands, Poland, Spain and the United Kingdom.

Aglukkaq did not confirm that Canada used its veto power to block the EU application, saying only that “Canada supports the consensus decision of the Arctic Council’s ministers today.”

“I’m pleased to hear that the Arctic Council chair joins other Canadian Inuit leaders in opposition to the EU’s application,” Audla said May 15 in a statement.

“I believe we have been provided with an opportunity to educate the EU members on the sustainable hunting practices of Canadian Inuit, lessons sorely needed for a group who has clearly based past decisions on political pressures from animal rights groups rather than on more reasoned options and objective scientific facts,” Audla said.

Aglukkaq did not provide specifics on how the seal ban dispute — which arose in 2011 after the European Parliament voted to impose the ban — can be resolved.

But she did suggest the EU has little hope of gaining observer status until “the concerns of Arctic Council members are addressed.”

The Kiruna Declaration, released by the eight circumpolar ministers May 15, says the Arctic Council “receives the application of the EU for observer status affirmatively” but defers a final decision “on implementation.”

The EU, however, may continue to listen to Arctic Council proceedings as an ad hoc observer.

The council also denied observer status to all seven non-governmental organizations who had applied.

Those failed NGO applicants, who represent a wide range of interests, include the World Meterological Association, the Association of Oil and Gas Producers and Greenpeace.

Aglukkaq did not state why those groups were denied observer status, saying only the decision was made by consensus.

At the same time, the Arctic Council has issued an “observers manual” to guide the work of observers.

Aglukkaq also said the council must ensure that the admission of new observers does not “dilute or diminish” the standing of Arctic Council member states or aboriginal permanent participants.

The permanent participants, which include international aboriginal organizations like the Inuit Circumpolar Council and the Russian Association of Indigenous Peoples of the North, must be consulted on Arctic Council agendas and may propose agenda items.

They may also raise points of order at meetings.

Aglukkaq said the presence of indigenous participants at Arctic Council gives observer states a chance to learn about the people of the North.

“Observers are making positive contributions to the work of the Arctic Council. Observers also have an opportunity to understand the impact their policies are having in the Arctic region or on northerners,” Aglukkaq said.

She said that “right from the get-go” she consulted with permanent participants on Canada’s priorities.

“They were involved in all the roundtables I held across the North,” she said.

One priority that flows directly from the permanent participants is the Arctic Council’s commitment to work on the promotion of mental wellness in Arctic communities.

“This is a huge issue for indigenous people,” Aglukkaq said.

Another priority is protecting traditional ways of life, she said.

The Arctic Council is also now committed to developing recommendations to integrate traditional and local knowledge into the work of the council, and to seek practical applications for scientific research.

“We need to combine the knowledge of the people who have lived in the North for generations with what we have learned through our scientific research and technology. Our work must speak to our people on the ground,” Aglukkaq said.