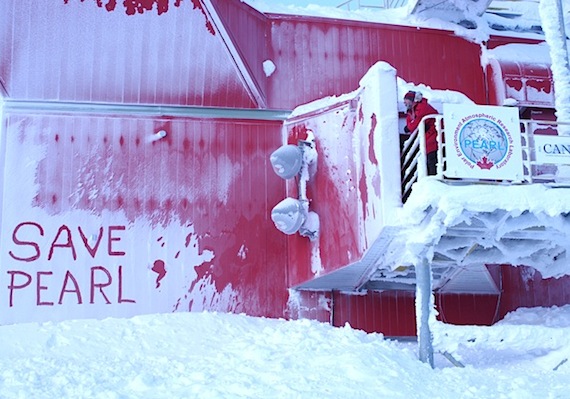 The Polar Environmental Atmospheric Research Laboratory on Ellesmere Island will be closing — at least temporarily — unless the government delivers a miracle in next week’s federal budget. The station, shown here with site manager Pierre Fogal on the porch, is one of the world’s top observatories for tracking the health of the Arctic atmosphere. (PHOTO BY VLADIMIR SAVASTIOUK/POSTMEDIA NEWS HANDOUT)

But he spent much of his time on his knees dealing with burst water pipes and frozen sewer lines at Canada’s beleaguered Arctic research station.

Then this week, the electrical system malfunctioned, says Fogal, site manager for PEARL, the Polar Environmental Atmospheric Research Laboratory, known as PEARL, located near the Eureka air base on southern Ellesmere Island.

The station, now limping along at half power and a chilly 10 C inside, is one of the world’s top observatories for tracking the health of the Arctic atmosphere. The station houses millions of dollars worth of scientific equipment used to monitor the ozone layer, greenhouse gases and pollution swirling around the polar vortex.

But it has been a bad year. Unusually frigid weather has taken a big toll on the station’s plumbing and power system, and the chilly financial wind blowing out of Ottawa has left PEARL in dire financial straits.

Federal grants that have kept the station running continuously since 2005 have run out, forcing the science team that runs PEARL to shut it down, at least temporarily.

With no money for salaries, the station’s three operators were let go in December.

And on April 5, the two researchers now at the station collecting one last batch of atmospheric data will turn off the lights.

The public — after learning of PEARL’S financial woes last month — has donated $12,000 to help keep the station going.

“People really want to help out,” says Dawn Conway, executive director the Canadian Foundation for Climate and Atmospheric Sciences, who has been collecting the donations for the lab. The donors range from a student who “believes in PEARL” to grandparents donating for the sake of their grandchildren.

The federal government has not, however, opened its chequebook, to the dismay of leading scientists.

James Drummond at Dalhousie University, who heads the science team that runs PEARL, has been making similar arguments in Ottawa and would be thrilled to see $1.5 million for PEARL in next week’s budget.

“What would be really nice is a line item in the budget papers to support PEARL,” says James Drummond at Dalhousie University, who heads the science team that runs PEARL.

Drummond doubts that is possible without “political connections.”

The “best shot” he suspects is to try to access the $35 million that was earmarked in last year’s budget for climate change and atmospheric research over the next five years.

Twelve months later the scientific community has yet to see a penny of the money. The Natural Sciences and Engineering Research Council says it has been working with Environment Canada on “implementing this initiative announced in Budget 2011” and is expected to finally announce details on Monday.

The PEARL team would have to compete with other researchers across the country who are also hungry for cash. Given the way such competitionswork, they don’t expect money from the $35-million fund to be awarded before 2013.

All of which leaves Fogal, who is not assured a pay cheque after next week, trying to figure out how best to deal with the electrical problem that has now reduced PEARL to about half power.

“It wouldn’t surprise me if it cost about $40,000 to repair,” says Fogal, explaining how an electrician would have to be flown in on a charter plane along with the necessary parts.

“If you knew what the future was you would jump right in there with both feet and fix it, and you’d do it right now,” Fogal says. “But because we don’t know what the situation is, nobody want really wants to jump in.”