“We think we have a great start at building something terrific” Norihiro Yamaji, deputy general manager of the Japan Oil, Gas and Metals National Corp., and Matthew Hornor, president and CEO of Kaizen Discovery, look over mine project materials at the Frobisher Inn in Iqaluit April 14 during the Nunavut Mining Symposium. (PHOTO BY JANE GEORGE) 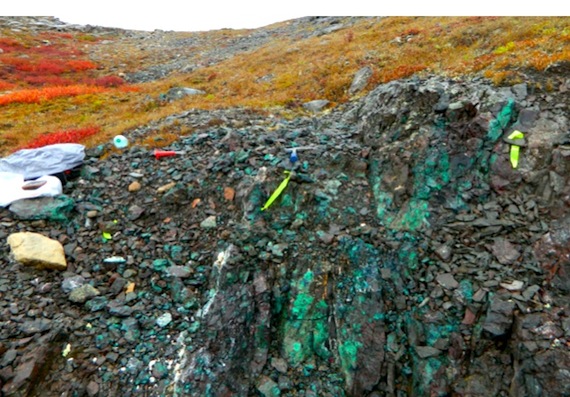 See that blue-green colour on the rock? That’s a sign of copper, right on the surface. There are many rocks like these on a property near the western Nunavut community of Kugluktuk where a company with Canadian and Japanese partners is hoping to explore. (PHOTO COURTESY OF KAIZEN)

There’s something a little different about a new copper-silver project near Kugluktuk.

This doesn’t come as a surprise because Matthew Hornor, president and CEO of a company called Kaizen Discovery, confided “our dream was to do things different” during an April 14 presentation to the Nunavut Mining Symposium in Iqaluit.

“Kaizen,” by the way, means continuous improvement in Japanese, a language that Hornor, who has a long-time relationship with Japan, speaks fluently.

Hornor said he’s reluctant to make promises until the company is sure the resources are there to support a large copper-silver mine project.

But this fledgling project has a few things that make it stand out among the slow-starting, stalled or failed mining projects in Nunavut’s Kitikmeot region.

Those include MMG’s ambitious Izok corridor project, now in limbo because it couldn’t find partners, especially government ones, to help pay for a port, airport, road, and microwave broadband system.

The Coppermine project, in contrast, has access to money — enough to build the $270-million port and most of the other basic infrastructure it would need for a future mine.

That’s because of the connection between Tundra Copper Corp. and Kaizen Discovery.

Kaizen’s partners include Itochu Corp. in Japan, a major trading house company worth $20 billion which is always on the lookout for resources to feed Japan’s hungry automotive and electronic industries.

Second, the Coppermine project’s property looks great with high-grade, large tonnage potential copper-silver deposits — and it’s located only five kilometres from a possible port and close to the town of Kugluktuk, which lies only 35 km from the centre of the claim.

“We think we have a great start at building something terrific,” Hornor told Nunatsiaq News.

Whatever his company does on the new property, Hornor said it will be done in close and respectful collaboration with the people of Kugluktuk.

Asked why he’s so optimistic about the Coppermine project’s future when other mining projects based in the mineral-rich Kitikmeot region haven’t yet managed to move from development to production, Hornor said the key to getting any mining project off the ground is to have a solid deposit.

And then you must find partners with “large shoulders,” such as Itochu, to sustain the project during its costly development and construction period.

Another plus for the Coppermine project — it’s not far from a future port on the Coronation Gulf, so the mine wouldn’t need the kind of 325-km all-season road needed by MMG for its badly ailing Izok Corridor mine complex, whose fuel supplies Kaizen have acquired for its planned Hope Lake camp.

Also in the Coppermine project’s favour: its location along a direct shipping route to Asia, which, Hornor said, has the potential to “open the Kitikmeot [region of Nunavut] to growth.”

The unexploited resources of Nunavut, and the big promise of the Coppermine project, drew Norihiro Yamaji to the symposium.

He’s the Vancouver-based deputy general manager of Japan Oil Gas and Metals National Corp., a well-financed state agency that seeks projects to invest in and then turn over to private industry.

The Nunavut Impact Review Board is seeking comments, between now and May 4, on the impact of Kaizen/ Tundra Copper’s plan to conduct a multi-year exploration program on the Coppermine property.

You can find all the documents on the NIRB’s online public registry here.

The Nunavut Mining Symposium continues in Iqaluit until April 16. On Wednesday, April 15, the symposium’s trade show at the Frobisher Inn is open to the public from 1 p.m. to 3 p.m.

For the full agenda, you can look at the symposium schedule here.