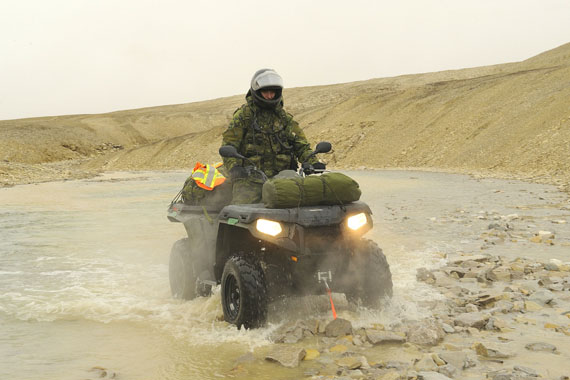 This year’s exercises were scheduled to take place in four regions throughout the North, with four separate scenarios.

Soldiers are now on Cornwallis Island in Nunavut’s High Arctic for “scenario 2,” after closing the first one in sub-Arctic Whitehorse, Aug. 9, which involved a simulated wildfire disaster-relief exercise.

About 150 soldiers and Canadian Rangers will take part in the Cornwallis exercise, according to Major Rob Truscott, commander of the High Arctic scenario.

Among these are 56 members of an Arctic Response Company Group — a set of reservists from divisions in the South, who are trained to support operations in the North.

“There are actually no formed troop units in the North,” Truscott said from Resolute Bay Aug. 8, as he awaited the arrival of a group from a Quebec division. “This way we’re able to develop personnel whose skills become more specialized in the North.”

From Resolute Bay, the soldiers will respond to a request from Environment Canada to deal with an illegal poaching incident of an endangered wild animal, likely an illegal falcon egg.

The exercise marks the first time Canadian Forces will practice with Environment Canada on a drill, Truscott said.

“This is a training event for them [Environment Canada] as well,” he said.

Early stages of the drill involve paperwork to shift requests from one federal government department to another, with some involvement from RCMP. Once done, soldiers will head out onto the land in all-terrain vehicles to investigate.

“That’s the big scenario,” Truscott said. “Within that we will have simulated accidents or events to prompt responses and reactions from personnel here in the ground.”

A Cormorant helicopter and Hercules aircraft will be on hand for a search and rescue training element of the exercise, he said.

Due to the huge distances in the Arctic, collaboration between all government departments, local and federal is a must when dealing with emergencies and law-enforcement, he said.

“In the North, all federal agencies need to play well together, and this is our opportunity to develop those interactions,” said Truscott.

After Aug. 14, Nanook’s next phase takes troops to the Baffin region for an exercise involving support to the RCMP and assistance from the Canadian Coast Guard.

The scenario involves a father and child who are lost on Resolution Island, just off the southern tip of Baffin Island, said Lt.-Cmdr. Suzanne Otchenash, commander of the scenario.

This will see the RCMP needing to locate the father for an undisclosed medical issue.

“[But the] RCMP doesn’t have the manpower to send out a ground search,” said Otchenash.

Troops based in Iqaluit, some 300 kilometres away, are available to support the effort, and respond to the police force’s request to help, under this scenario

And some details “make it an RCMP task, rather than a search and rescue,” she said.

About 30 sailors are also involved in the mock exercise, which is set to start Aug. 17.

Once forces accept the RCMP request, a Coast Guard vessel will transport forces personnel from Iqaluit to a small naval vessel, the HMCS Shawinigan, in Frobisher Bay, Otchenash said.

The exercise will include a beach-landing onto the island, and a search for the two people. Also involved are a Twin Otter plane from 440 Squadron in Yellowknife, and an Aurora CP-140 long-range patrol plane.

“They’ll provide aerial views, so they can provide a real-time picture of where to land,” the training commander said.

Two years ago, Operation Nanook’s mock disaster scenario of simulated air crashes in Resolute Bay was suspended after the crash of First Air flight 6560 of Aug. 20, 2011. 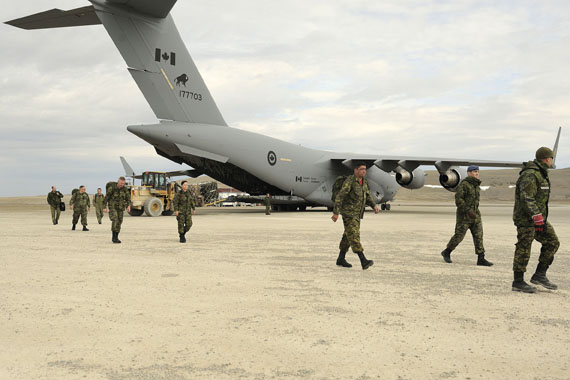 A CC-177 Globemaster lands in Resolute Bay Aug. 6 at around 1:00 p.m., carrying supplies and Canadian forces members participating in Operation Nanook. The members on the flight are part of an exercise to prepare the ground crew on in clearances and escorts for the operation. (PHOTO BY CPL. DAN STROHAN, 8 WING IMAGING TRENTON)