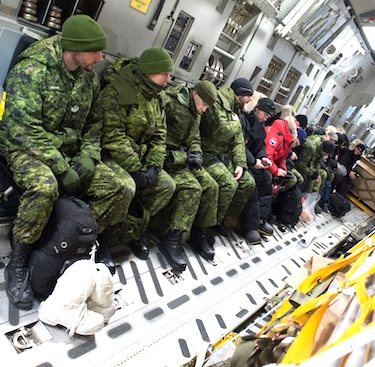 Canadian Armed Forces’ personnel took to the land, air and frozen seas east of Cambridge Bay, April 12, for the final stages of Operation Nunalivut, with their sights set on completing two sovereignty patrols on Victoria Island and under-ice diving in Queen Maud Gulf.

This year’s edition of the yearly springtime military exercise in the High Arctic opened April 1 with a land patrol on Victoria Island by Nunavut-based Canadian Rangers of 1 Canadian Ranger Patrol Group.

A short visit from Canada’s associate minister of National Defence, Julian Fantino, to the command centre of Operation Nunalivut 2015 in Cambridge Bay, April 8 and April 9, marked the start of the next two activities — which are staged out of the North Warning System site near the western hamlet’s airport.

Since its start in 2007, Operation Nunalivut “demonstrates our ability to operate in the harsh winter environment in remote areas of the High Arctic, and enhance the capability to respond to any situation in the Canadian North,” Fantino said April 10, from Ottawa.

Large-scale military exercises in the Canadian Arctic are particularly important, given “the apparent increase of activity by the Russians in this part of the world,” Fantino said.

The minister noted “we’ve seen an upsurge in activity” in the Canadian Arctic from Russian military aircraft.

“We obviously are concerned about that. We feel that these exercises are ever more important to exert our sovereignty and our ability to respond,” Fantino told reporters via teleconference from Ottawa.

“We’re looking to continue standing up against any threat to our sovereignty and stand ready at any moment to defend our people, land and interests.”

This year’s Op Nunalivut, as in previous years, “provides an opportunity for Canadian Armed Forces to demonstrate inter-operability in the High Arctic with our military allies, and other Canadian government institutions,” Fantino said — as news began to surface that Russia’s foreign minister, Sergey Lavrov, would not attend the Arctic Council ministerial meeting in Iqaluit April 24 and April 25.

“This is the second year that they’ve trained with us in these operations,” Capt. Bonnie Wilken, public affairs officer for Joint Task Force North, told Nunatsiaq News from Cambridge Bay.

“It’s common for us to have U.S. forces and other NATO countries come and join our exercises and operations,” Wilken said. “We share information and best practices.”

The Air National Guard’s aircraft and their crew “will support the Canadian Forces mission by carrying supplies and will also practice landing on sea-ice runways,” Col. Shawn Clouthier, 109th Airlift Wing Commander, said in an April 6 news release from the New York State division of Military and Naval Affairs.

Supporting Op Nunalivut 2015 “allows the New York Air National Guard Airmen to further refine the skills they need to operate in the polar regions and to practice working with Canadian Forces members,” Clouthier said in the news release.

More than 200 military personnel are taking part in Op Nunalivut, which runs until April 22.

Among them are members of Princess Patricia’s Canadian Light Infantry’s Third Battalion, from Edmonton. The soldiers assembled qamutiit and readied their snowmobiles after their arrival in Cambridge Bay April 9, which they are using in two separate patrols east of the community.

Meanwhile, members of the Royal Canadian Navy’s Fleet Diving Unit are heading much further east of Cambridge Bay with Parks Canada underwater archaeologists to a secret location on the sea ice in Queen Maud Gulf.

A team of 34 Navy divers and Parks Canada employees, with a protection force of six Canadian Rangers, are setting up camp above the site of the HMS Erebus shipwreck.

Here they will drill a hole through two metres of ice, to survey the 170-year-old remains of a British Royal Navy vessel that was part of the doomed Franklin expedition to the Northwest Passage.

“They’re starting to drill the hole that they’ll be diving through,” Wilkin said April 10. “When they start diving depends on a lot of variables, like how quickly they can get through the ice, and the thickness of the ice.”

Exploratory dives under the sea ice have been part of many other Op Nunalivut exercises. Navy divers teamed up with Parks Canada last year to explore and chart the wreck of HMS Breadalbane. The 19th-century ship sank in the Northwest Passage in 1853, when it served in the search for Sir John Franklin’s lost expedition.