“It’s a privilege to be a Ranger” 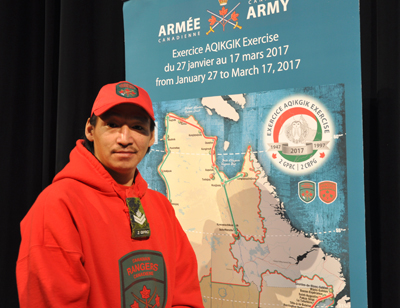 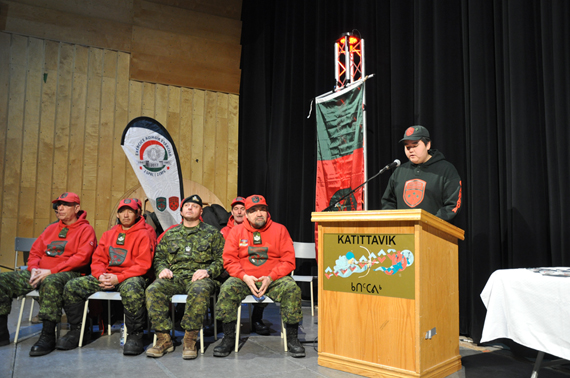 Participants in the 2017 Aqikgik exercise arrived in Kuujjuaq this week, where the 2nd Canadian Rangers Patrol Group celebrated the mid-point of a 2,600-km journey and a send-off for the next members departing on the next stretch of the expedition.

Among them, Master Corporal Charlie Takirk from Ivujivik, who travelled the portion of the expedition that visited Aupaluk, Tasiujaq, Kangiqsualujjuaq and Kuujjuaq. The expedition aims to travel by snowmobile through all 35 Quebec communities with Canadian Ranger or Junior Canadian Ranger patrols.

The travel can be physically tiring, but seeing the region and being welcomed into each community makes it worth it, Takirk said.

Takirk first joined the Canadian Rangers when he was 18.

“I really wanted to become regular infantry [with the Canadian Armed Forces},” he said. “And this was the next best thing.”

“My proudest moment is bringing back a victim alive and well—that’s why I do this.”

It’s not Takirk’s first expedition; in 2008, he was part of a team of Rangers that travelled 3,600 km from Kuujjuaq to Quebec City to mark the city’s 400th anniversary.

But this year, Takirk was able to snowmobile through communities in his own region. The first group in the Aqikgik expedition left Waskaganish on Jan. 27 to travel up the James Bay coast to Kuujjuaraapik, where a second group snowmobiled up Nunavik’s Hudson Bay coast to Ivujivik.

The third stretch of the journey went from Ivujivik to Aupaluk, where Takirk’s team began.

A new team left Kuujjuaq Feb. 25 en route to Schefferville, from where another group will head down towards Quebec’s Lower North Shore and Magdalen Islands.

The exercise is one of the patrol group’s signature events, designed to assert its presence across Quebec’s North.

“But it’s also for testing our operational capabilities and a chance to exchange knowledge,” said 2CRPG spokeswoman Karine Roy.

There is at least one local Ranger taking part in each stretch of the trip, she said.