Canadian Royalties aims to start shipments from Nunavik Nickel in 2013 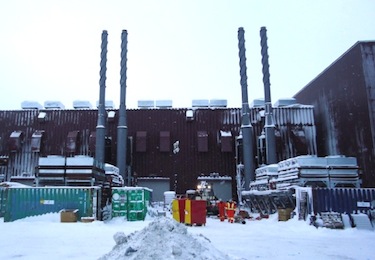 The on-site diesel power plant at the Nunavik Nickel Mine can produce more than 18 megawatts per hour of electricity. (PHOTO COURTESY OF CANADIAN ROYALTIES) 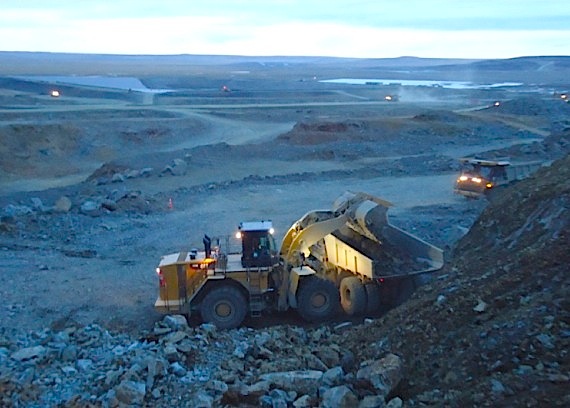 Ore from the Expo open pit mine is already being stockpiled at the site of Canadian Royalties’ Nunavik Nickel mine in Nunavik. (PHOTO COURTESY OF CANADIAN ROYALTIES)

A Chinese-owned mine in Nunavik will soon see huge ice-class vessels sailing through Hudson Strait to bring nickel, copper, platinum and palladium to European markets.

After sinking $735 million into infrastructure, Jien Canada Mining Ltd., the owner of Nunavik’s second soon-to-be operating mine, plans to ramp up production in early 2013 and hire more Nunavik workers.

The mine company, which expects to reach full production by 2014, will produce nickel, copper, palladium and platinum for at least 13 years.

Located 20 miles from Xstrata Nickel’s Raglan nickel mine, the Nunavik Nickel mine sits in “one of the most inhospitable places in the world,” said its president, John Caldbick in a recent interview.

But the cold, rocky plateau is rich in minerals, and early in 2013 the mine will start processing ore.

More than 650 people are now on site, living in its 428-person main camp and other temporary camps. Some workers are excavating ore from the Expo open pit mine, while others complete essential parts of the mine’s infrastructure.

Engineers are now putting the finishing touches on its mill, which will be put through a run-through next month, Caldbick said.

By January, the mill will be ready to start producing concentrate. That will be stored at Deception Bay, with the first shipment scheduled to start next August.

If this all sounds smooth-running, that’s not entirely true: the Nunavik Nickel mine project has faced numerous hurdles since 2008, when the Kativik Enviromental Quality Commission issued a permit for the project.

Those hurdles included severe financial difficulties, unforeseen problems with the construction of the mine’s port and docking facilities along the Hudson Strait, and delays on an agreement with Xstrata to share the Donaldson airport, as well as a series of legal disputes after Jien Canada Mining Ltd. took over ownership of Canadian Royalties.

Then, Jien fought with Goldbrook until early in 2012 when Jien finally bought out that company’s interest in Canadian Royalties for $100 million.

Now the Chinese-owned company, still called Canadian Royalties, appears to have its ducks lined up in a row.

Canadian Royalties now has an arrangement with Xstrata that sees the two companies sharing use of the Donaldson airport.

And for its port, Canadian Royalties has found what it calls an environmentally safer and cheaper solution: a giant barge that can serve as a docking facility at Deception Bay.

From Deception Bay, the company plans to ship out concentrate nine months a year starting next August, under a deal to supply nickel to Russia’s Norilsk Nickel in Finland, which bought a $25 million stake in the project in 2007.

Meanwhile, Caldbick said Canadian Royalties is fighting to dispel the idea that it’s a case of Chinese “plundering the resources” of the North for their own industrial needs.

The Nunavik Nickel Mine is a pure “business proposition,” Caldbick said.

Canadian Royalties is a Chinese-owned company but it’s “staffed, managed, run and controlled by Canadians, particularly Quebecers,” he said.

The mine wants to see more Nunavik workers and it has a plan to boost the numbers of Inuit workers from 29 to 73 over the next three years.

That would double the percentage of Inuit workers on site from nine to 18 per cent by 2015.

The company has hired three Inuit employment agents, one each for Puvirnituq, Salluit and Kangiqsujuaq, and visited every Nunavik community on a recruitment campaign, which helped net 100 resumés.

Working with the Kativik Regional Government, Canadian Royalties also has plans to seek government help to start up a training program for Inuit workers at the mine.

“We’ve got to make do with the capital that we have,” he said.

“We would have preferred something earlier on, but that didn’t materialize.”

Caldbick said the company received “nothing at all in terms of government assistance in funding infrastructure.”

“Which is what I thought the Plan Nord was supposed to do,” he added.

Calbrick said Quebec could still step in to assist the Nunavik Nickel project and people in the communities by building more housing and putting in roads to the mine site to the nearby communities — 30 kilometres to Salluit and 80 km to Kangiqsujuaq.

Caldbick said he was pleased that, judging from the Nov. 20 budget, the Parti Québécois government appears to have backed away from a plan to collect higher royalties from mining companies.

The new government officials are “in tune enough to realize when they have made a mistake,” he said.

When the mine moves into production, Nunavik stands to reap benefits.

Makivvik, which in 2008 received a $1 million signing bonus for the Inuit Benefits Agreement, gets a second $1 million payment when the Nunavik Nickel Mine starts operations.

After that, over the mine’s lifespan, the deal will generate up to $80 million in benefits for Makivvik and the three communities nearest the mine, Puvirnituq, Salluit and Kangiqsujuaq.

The IBA also gives Inuit priority on jobs worth about $14 million or more a year as well as other spinoffs valued at least $50 million.

Canadian Royalties agreed to increase the percentage of profit paid to Makivvik and the communities if the price of nickel remained higher than $12 a pound — although now it only stands at about $7.50. 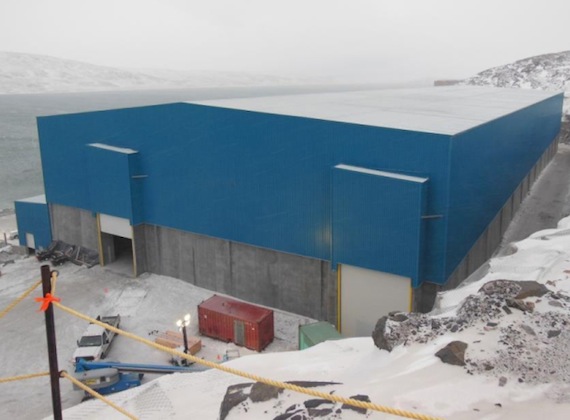 This warehouse at Deception Bay on Hudson Strait will store concentrate milled at the Nunavik Nickel Mine for shipping to markets in Europe. (PHOTO COURTESY OF CANADIAN ROYALTIES)