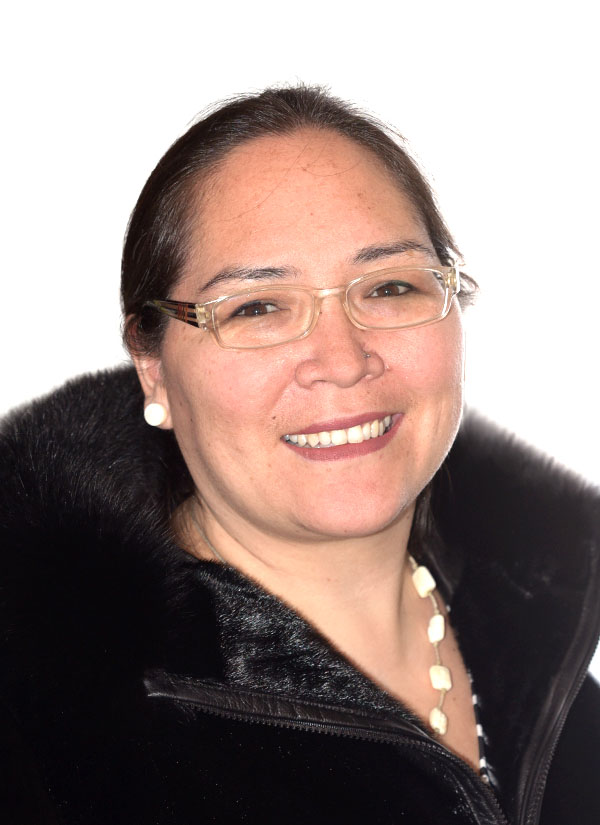 Aluki Kotierk promotes the idea that there are many different ways of being Inuk.

Aluki Kotierk is taking leave from her job as NTI’s director of Inuit employment and training to run for the NTI presidency. She has held senior posts with several Government of Nunavut departments, the Office of the Language Commissioner and Pauktuutiit Inuit Women of Canada.

I think Inuit need to know that they are capable and that they can dream big. There should be supports for that, whether it’s participating in formal education or in traditional economies like hunting or becoming a seamstress. I think the ability to have a strong foundation in being Inuk and still participate fully in modern society is important.

But to get to that we need to address collective healing. I think many of us have experienced pain and we need to reduce the social symptoms we currently see… I feel strongly that it’s a symptom of our society, not an individual thing.

What would NTI’s president’s role be in that? I think it would be to speak about it, first and foremost. And to look for ways to provide support to communities for a healing process that works in their community.

Another important area is Inuit identity. Often we hear about how people are less Inuk than others. That’s quite destructive. Rather than bring each other down, we need to focus on bringing each other up and celebrating the diversity of being Inuk.

I think low voter turnout isn’t unique to NTI elections; it’s across the board. Each candidate has a role to play in raising awareness of the importance of voting. And over time, I hope voter turnout would increase.

When I was in Arctic Bay recently, I went and spoke to a Grade 9 class, even though I knew they couldn’t vote because having those kinds of conversations are important.

I used to think voting wasn’t very important—suvalikkiaq, or there’s “no point.” But when I worked with Pauktuutit I remember sitting in an international meeting and it dawned on me that this was the kind of place that people talk about issues and make decisions that impact us, even in small Inuit communities like Arctic Bay.

I just want to state that before putting my name forward I was the director of Inuit training and employment, which oversaw [MITC].

I think it’s important that information is shared about the training initiatives. Having communication with communities is very important, in general for NTI, not just for MITC.

I think community members often hear about organizations but don’t really know what they’re doing on their behalf. Sometimes organizations go into communities quickly, consult, and then leave and the community doesn’t hear from them again.

I think that speaks to transparency and the importance of having a continued presence in communities. Communication works two ways: the organization provides information on what they’re doing, but also listens—and this is really important—to what the issues are and what’s important for the organization to work on.

NTI has a [Memorandum of Understanding] with the GN in terms of outlining how they would work together, politically. Part of the challenge is that you can have agreements but if you don’t implement them then it’s for naught.

I think my style is quite inclusive. I like to work with people and talk about things. I prefer not to be too adversarial. I think that goes a long way in terms of trying to achieve the same or similar goals.

Sometimes there might be issues where we can’t come to an agreement but we can work on the things that are common goals. I’d encourage those kinds of conversations not just at the political level but also at the bureaucracy level. The political level could lead by example.