Pitseolak Ashoona’s print titled Games of My Youth is on display at the IAIA Museum of Contemporary Native Art in New Mexico til the end of the year, as part of a show called Akunnittinni. (PHOTO COURTESY MoCNA) 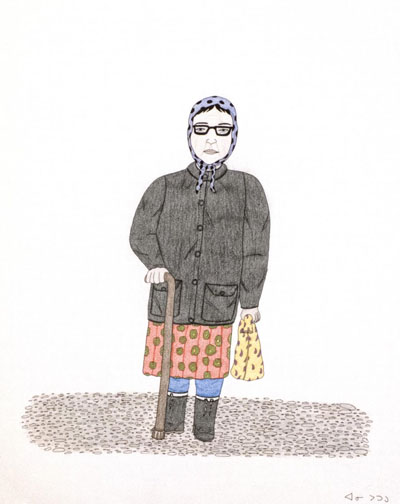 Annie Pootoogook’s A Portrait of Pitseolak is on display at a at MoCNA this year as part of the exhibition Akunnittinni. (IMAGE COURTESY OF MoCNA)

The artistry of the far North is headed to America this summer.

Dorset Fine Arts, the marketing arm of Cape Dorset’s Kinngait Studios, has teamed up with the IAIA Museum of Contemporary Native Arts in Santa Fe, New Mexico — a centre for Indigenous art — to bring Inuit art to a larger audience this year.

The partnership includes two exhibitions and an Aug. 21 panel discussion on Inuit art called “Telling a Story: The Art of Cape Dorset,” focusing on the community history of art production and particularly on stonecut work and lithography.

The first exhibition, called “Inuit Works on Paper,” features the work of Cape Dorset artists Saimaiyu Akesuk, Pitseolak Ashoona, Tim Pitsiulak, Kananginak Pootoogook, Pudlo Pudlat and Ningeokuluk Teevee, among others. That show runs until the end of the year.

A second exhibition called “Akunnittinni,” loosely translated as “between us” in Inuktitut, chronicles the visual dialogue between an Inuk grandmother, Pitseolak Ashoona, mother Napachie Pootoogook and award-winning daughter Annie Pootoogook — the only one of the three artists still living.

The exhibition illustrates the lives of three generations of Inuit women, including “sometimes harsh memories and historically resonant moments,” said a Museum of Contemporary Native Arts release. That show runs from Aug. 19 to Dec. 31.

In both cases, the works are on loan from Inuit art collector Edward J. Guarino and Dorset Fine Arts.

The new partnership is part of Dorset Fine Arts efforts to promote Cape Dorset’s work on a more international stage.