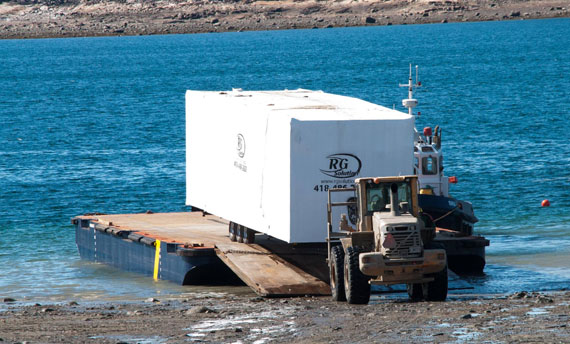 Sealift crews offload a seacan containing modular classroom parts in Cape Dorset this week. The new temporary classrooms will house high school students until a new school is built and ready to move into, likely by September 2019. (PHOTO BY CLAUDE CONSTANTINEAU)

Cape Dorset residents gather near the site of the former Peter Pitseolak high school July 21, which burned down in 2015, as part of a ceremony and memorial for the community institution. Crews are finally clearing the last of the debris from the site, which may eventually become the site of the community’s new health care centre. (PHOTO BY CLAUDE CONSTANTINEAU)

It’s been almost a year since a major fire destroyed Cape Dorset’s Peter Pitseolak high school, leaving 170 students without classrooms and robbing the community of an important meeting place.

Since the day of the fire, Sept. 6, 2015, much of the charred debris has sat at the site of the school, a daily reminder of the community’s loss.

But not for much longer. This past week the territorial government started a clean-up of the site, where crews will spend the next two months clearing away the remaining material.

The hamlet hosted a ceremony July 21 to mark the occasion, using this as opportunity for former students to say goodbye to the institution where Cape Dorset’s youth were educated over the past 50 years.

Community and Government Services, the territorial department leading the clean-up, said the fire happened last year just before winter, making it difficult to coordinate a clean-up at the time.

“It was really an issue of safety and practicality,” said Paul Mulak, director of capital projects at the CGS.

Once the site is cleared up, the hamlet will decide what to do with it. A different location, behind Cape Dorset’s arena, has already been chosen for the construction of a new high school, Mulak said.

The former Peter Pitseolak school site could become home to new or expanded community health centre, he said, although those discussions are still in the early stages.

As the clean-up takes place, sealift crews have been offloading portables, or modular classrooms, which will serve as the temporary home for high school students until the new school is built.

And a RFP has been issued for the design and construction of the new building, but it’s not expected to be complete until September 2019, Mulak said.

In the meantime, the CGS Department will be putting together five interconnected modular classrooms, which will then be linked to Sam Pudlat elementary school, which shared its facilities with Peter Pitseolak staff and students last year.

The shared schedule saw elementary school students’ day run from 7:30 a.m. to noon, at which point high school students used the space from about 12:30 p.m. until 7:30 p.m. — a schedule that took a toll on many families.

It’s not yet clear how the schedule will work with the new temporary classrooms.

“We’re not anticipating that [the portables] will be ready for the start of the school year,” said Mulak, “but we’re hoping to have them installed as soon as possible.”

Crews are still waiting on materials to construct the link that will connect the temporary classrooms to Sam Pudlat. Mulak said the classrooms will be ready to move into before winter arrives.