Cape Dorset unites to bring Christmas to everyone

“The amount of community spirit that Cape Dorset has is overwhelming” 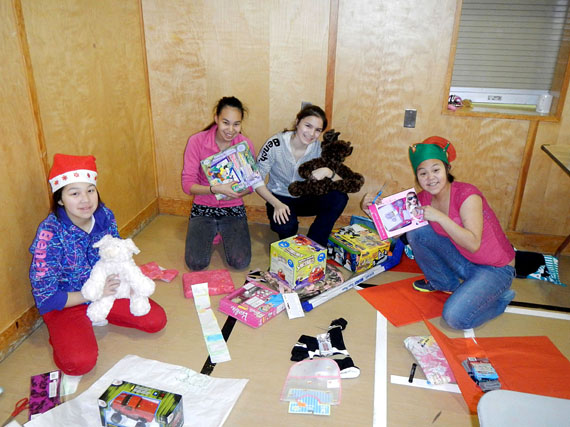 From left to right: Minnie Parr, Moosie Toonoo, Carmen Rowsel and Leeta Qimirpik, some of the young people in Cape Dorset’s youth mentorship program, help wrap gifts for kids. All of the items will be packed into gift baskets and delivered to families in need in the community. (PHOTO COURTESY C. WADDELL)

When a group of people heard that Cape Dorset wasn’t going to get an annual Christmas gift donation from the South, they decided to do something about it.

Teachers from Sam Pudlat Elementary School, the hamlet, the community justice committee, the health centre, the youth mentors, mental health workers, the RCMP and other community members got together to devise a plan, said Candice Waddell, psychiatric nurse for Cape Dorset and Kimmirut.

“[We] decided we would do something in Cape Dorset to make sure that the kids would all have gifts this Christmas,” she said.

In the first week of December, she helped organize fundraising events, which included a bingo night, where the group managed to raise almost $4,000.

Combined with donations from other community organizations including the hunters and trappers association, the suicide prevention committee, the Cape Dorset Northern Store and the West Baffin Eskimo Co-op, about $5,500 was raised.

That money went towards buying 150 presents for children in need, as well as 25 gift baskets of necessities for families “that might not have [much] over the Christmas holidays, as well as families who have suffered tragedy in the past year.”

“Everybody just totally went, ‘wow this is what has to be done, let’s do it,’” she said.

Teenagers from the community’s youth mentorship program — nine high school students who run all the after school sports at the elementary school and do other cultural activities — helped out with arranging the gifts.

“They’re a really strong group of youth who just shine,” she said.

At the bingo, the main fundraising event for the gift baskets, “they were answering phones, they were running around, they were there and they were helping the whole time,” Waddell said.

They’ve been helping sort gifts, and will help wrap and deliver them around the community, she said.

That will be done in one of the RCMP’s vehicles, Waddell said.

The goal is to let the families and children who are receiving presents and baskets know that the community is thinking about them over the Christmas holidays, which can be tough for some people, she said.

Elders and families with sick loved ones will also receive gift baskets.

“We thought that we would use the entire budget, for those 150 toys, it’s a lot of toys, but the northern and the co-op gave us ridiculous deals from both of their stores,” Waddell said.

“Half the budget has been left in the account and we’re going to do the same thing next year,” she added.

And for Waddell, working with the youth mentors and organizing the basket delivery has been “incredible.”

“The amount of community spirit that Cape Dorset has is overwhelming, the kids are fantastic and the youth are just absolutely unbelievable,” she said.

“To see these youth shine it’s unbelievable it’s really touching and there are a lot of really warm hearts here in Dorset and they need to be recognized for that.”

Waddell says it can be hurtful to people when Cape Dorset it is viewed as a negative place.

“It’s not Cape Fear over here, we have problems just like every single other community does, but we have such a strong group of people that are trying to make change,” she said.