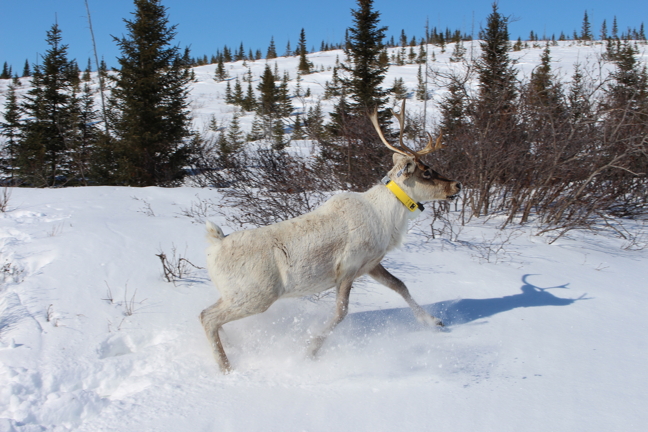 Fourteen pregnant female caribou from Nunavik’s Leaf River herd were fitted with camera collars in March 2016. Video retrieved from the collars, which fell off in September 2016, show researchers at Université Laval’s Caribou Ungava project the birth of calves and other information they say is crucial to figuring out why the herd is dwindling in numbers. (PHOTO COURTESY CARIBOU UNGAVA) 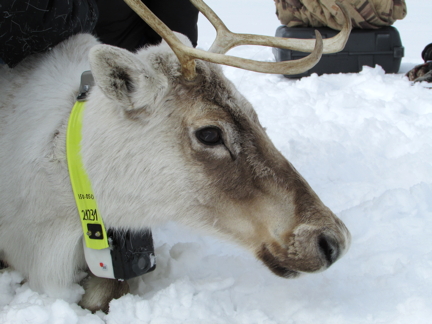 A close-up view of the 2.5-lb, $5,000 camera collars mounted on 14 pregnant female caribou in northern Quebec to help researchers determine calf survival and other factors that may be impacting the Leaf River herd, a food source crucial to Nunavimmiut which declined to below 200,000 animals in 2016 from an estimated 630,000 animals in 2001. (PHOTO COURTESY CARIBOU UNGAVA)

There is a lot of close-up tundra munching, baby grooming, forward movement and panning left and right across the landscape. There’s even underwater footage of skinny legs paddling through blue-green water.

It’s what you might expect from a caribou cam.

Wildlife biologists from Université Laval’s Caribou Ungava research project have been seeking answers as to why the Leaf River caribou population in Nunavik has steeply declined in recent years.

In March 2016, they decided to outfit some pregnant female caribou with camera collars as a way to gauge how many calves are surviving to the fall and maybe get some clues as to why.

“The risk was that we might not see the calves on the camera. That’s what my colleagues were telling me,” said Caribou Ungava researcher and professor, Steeve Côté. “But I proved them wrong. It worked really fine and it gives extra data as well.”

Of the 14 females collared, 13 had calves and eight of the young were still seen on videos at the end of the monitoring period. That’s a 62 per cent summer survival rate, higher than expected.

They showed, for example, how mothers and calves interacted, where the herd went, when they travelled and rested, what they ate and where, the abundance and type of food available, the kinds of environments they preferred and even the number of flies that harassed them.

Plus the videos—all shot from a camera under the mother’s chin—are fun to watch.

Côté said he got the idea to use cameras based on a similar project done by a colleague in Norway on reindeer.

Calf survival rates are crucial determinants of a herd’s health and the only other way to get those numbers is to fly over calving grounds, capture calves when they are a day or two old and fit them with VHF transmitters.

But it’s difficult and dangerous; sometimes the mother will abandon the calf as a result. Plus you have to repeatedly fly over calving grounds and that stresses out mothers and babies.

The females were captured in March—several months before they gave birth—which minimizes impact on the pregnancy, Côté said.

Researchers trap the animals with nets dropped from a helicopter. They use no sedatives or other drugs. The animal’s legs are tied together while scientists weigh and measure her, use a battery operated ultrasound to confirm pregnancy and gestation and then fit her with a collar.

That all takes about 15 minutes, Côté said.

The cameras clicked on June 1, 2016 and then shut off 92 days later, on Sept. 1, when the collars dropped off. In between, those cameras recorded 10 seconds of video every 20 minutes for 18 hours a day.

The German-made collars—which cost about $5,000 and weigh about 1.2 kgs, or 2.5 pounds, each—are waterproof and able to store more than one gigabyte worth of video per day.

They also contain a GPS tracking device so scientists can find them in the field after they drop off. All 14 cameras were retrieved last fall and sent back to the German manufacturer for video extraction. Those videos were finally sent to Caribou Ungava in December 2016, a full nine months after the project began.

Côté said he knows many Inuit and others disapprove of animal collaring. And indeed, the collars scientists used to use were heavier, more cumbersome, used too frequently and left on the animal for longer periods of time.

Today’s collars are lighter, used more sparingly, and have mechanisms installed so they drop off. And he believes the project is justified considering the worrisome decline in Leaf River caribou numbers and the race for answers.

“There’s no point in doing it if we are screwing up our measurement.”

Based on the success of the pilot, Caribou Ungava researchers went out this past March to capture and collar 24 more pregnant females for year two in the three-year project.

Quebec biologists estimate the Leaf River caribou herd—which occupies Nunavik’s northern tip, migrating south to the tree line in summer—has dwindled to below 200,000 animals in 2016, down from about 630,000 animals in 2001.

The Quebec government said this past January that it will close the sport hunt of migratory caribou in an effort to help the herd rebound.

Côté said the sport hunt is not the problem because very few animals, all male, are taken for sport.

It would be more helpful to track how many animals are taken by subsistence hunters—estimated in the thousands—but so far, Nunavik Inuit organizations have resisted recording and reporting of that information, he said.

“I’ve been asking for [subsistence tracking] for several decades now,” he said, “so we can build better population models.

He said he understands that, “but if the population goes down, as it does for the George River, [subsistence hunters] will be the ones most impacted.”

The George River caribou herd, which occupies Nunavik and Labrador, was also closed to sport hunting in 2012 after its numbers dwindled to an estimated 8,900 in 2015, down from an estimated high of 800,000 animals in the 1990s.

The Government of Newfoundland and Labrador banned all hunting of the George River herd in 2013 with a plan to review the ban in spring 2017, fearing that without drastic action, the herd could be wiped out in five years.