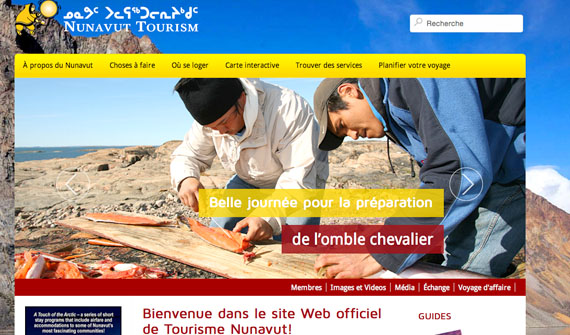 The website — nunavuttourism.com — has only been available to English and German speakers until now, according to an Oct. 2 news release from the non-profit francophone group Carrefour Nunavut.

“Knowing that many visitors to the region are francophone and that this clientele is still not well targeted by Nunavut tourism marketing campaigns, it had been quite some time since we wanted the Nunavut Tourism website to be available in French,” said Danielle Samson, the director of Carrefour Nunavut.

All users have to do is click the language option on the drop down menu on the top right hand side of the page, and switch it to French.

The Iqaluit business, Cuerrier et associés, translated the website, with financing from the Government of Nunavut’s department of Culture and Heritage.

The idea of adding on French came when an inter-territorial website called Le Nord canadien was created — a project funded by the Canada Northern Economic Development Agency that promotes the three Canadian territories in French.

The website, created in 2010 for the Vancouver Olympics, links visitors to the territories’ tourism pages, and supplies information through stories, videos and photo galleries in French.

That inspired Carrefour to urge that Nunavut Tourism offer a French version of their site.

“This initiative helps to meet the requirements of Nunavut’s Official Languages Act. The new Internet site will also help to open up francophone markets overseas,” Carrefour said in its news release.

Over 420,000 French tourists visit Canada each year according to Carrefour, and “the number of visitors to Canada from France has increased by 35 per cent over the past 10 years,” the release read.

Carrefour also launched a free tour guide project in August with preloaded iPods with French, Inuktitut and English audio guides for use by tourists while walking around Iqaluit.