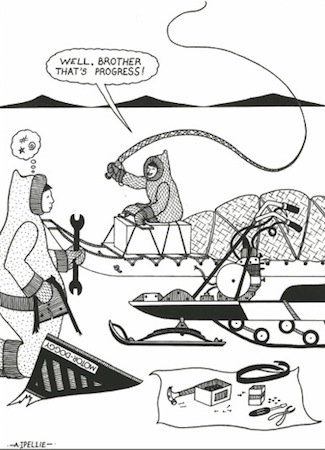 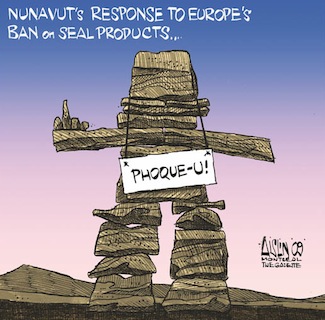 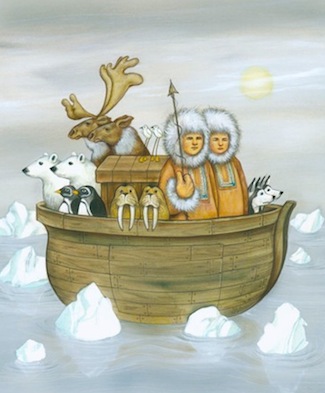 Laughter makes Terry “Aislin” Mosher happy — and he was pleased to hear hoots of laughter from everyone at the Nov. 2 launch of the Polar Lines cartoon exhibition in Ottawa.

Prepared for Inuit Tapiriit Kanatami’s 40th anniversary celebration, Polar Lines includes some of the best editorial cartoons drawn by Canadian cartoonists on Inuit and the North.

The exhibition’s cartoons — submitted to ITK by Mosher, a long-time, award-winning cartoonist at the Montreal Gazette, and current president of the Canadian Cartoonists Association — put a spotlight on Inuit and Canada’s Arctic regions.

The exhibition’s final picks are thought-provoking and hilarious.

Take the inuksuk, which Mosher — who draws under the name “Aislin,” inspired by his daughter’s name Aislinn — produced in 2009 when the European Union first moved to ban seal products in its 27-member nations.

The cartoon, called “Nunavut’s response to Europe’s ban on seal products,” shows an inuksuk making an obscene gesture with a stone finger. Around its neck hangs the sign “Phoque-U,” which makes a play of words on “phoque” or “seal” in French.

Mosher says that’s one of his favourite cartoons because he likes “the idea is that it’s abrasive.”

“We were very sensitive about this [ban]. Certainly the seal hunt is also part of our tradition and the tradition in Nunavut of hunting animals,” Mosher said in a recent interview.

To recruit cartoons for the Arctic-themed exhibition, Mosher contacted every political cartoonist in the country and said “what have you got on this?”

Mosher also visited the National Archives in Ottawa to dig up historical cartoons from 1950s and 1960s.

Learning from ITK about cartoons drawn by the late Alooktook Ipellie, who also contributed to Nunatsiaq News, was “the icing on the cake,” he says.

Of the 800 cartoons Mosher gathered from cartoonists, several underlying themes emerged, such as sovereignty and climate change.

Mosher then submitted his 200 final choices to ITK. These were whittled down to less than half that number for Polar Lines.

“I was quite pleased with their choices, but it kind of looks like my show, and I’m a little embarrassed about that. The fact of the matter is that I’m always been taken with the North, and I’ve drawn more cartoons than anyone else on the North,” says Mosher, whose career in Montreal stretches back more than 40 years.

Mosher organized a similar, but smaller exhibition of northern cartoons for the 1999 opening of Makivik Corp.’s office building in Kuujjuaq.

While Mosher perused the cartoons that flowed in for Polar Lines, “the great discovery” for him was the fondness of cartoonists for the North and for Inuit in particular.

Mosher found “a collective sympathy for what Inuit have had to put up with in dealing with white people, dealing with government institutions.”

“It’s a natural alliance that the cartoonists say ‘they these people have been screwed over.’ There’s that real sympathy. To a man and woman, all cartoonists were highly sympathetic to Inuit.”

“We thumb our noses at a lot of well-known people, and pretentious politicians and so on. People love that, but no one loves that as much as the Inuit,” says Mosher, who’s intrigued by stories he’s heard about laughing and humorous insult contests that used to take place in snowhouses during the winter.

“A wonderful way to run a society,” he states.

Mosher says he found no mean cartoons and no racism in any of the cartoons submitted for Polar Lines. Either that “doesn’t exist or I didn’t find it,” he says.

One of Mosher’s favourite cartoons in Polar Lines, an image by U.S. illustrator Anita Kunz, was considered by the New Yorker for a cover. Her cartoon shows an ark carrying two Inuit and other polar animals, as they escape from the melting polar ice cap.

“She did put penguins in, so that’s a problem [because penguins are only found in Antarctica]. But we don’t know everything, and it’s nice when things have little mistakes,” he says.

Mosher also loves a cartoon by the late Duncan Macpherson of the Toronto Star , which shows a group of Inuit in a snowhouse laughing at the “white man’s news” on television, “this crap that they’re being fed.”

Polar Lines does include several French-language cartoons, but overall there are fewer cartoonists dealing on northern themes in Quebec, Mosher says.

But another of Mosher’s top picks, a cartoon by Ingrid Rice, plays on a popular slogan prior to the 1995 sovereignty referendum, “My Canada Includes Quebec.”

It shows Jacques Parizeau, then the premier of Quebec, wearing a tee shirt that says “My Quebec Includes Nunavik,” while he holds a newspaper with a headline reading, “Inuit Plan Separation from Quebec – Vast Northern Territory at Stake.”

Mosher chuckles over a cartoon by “Bush” of two Scrabble players arguing whether an Inuktitut word works in their game: “Of course it’s a word!! If you don’t believe me look it up in the dictionary,” one man says to the other.

And then there was Ipellie, whose well-crafted cartoons always got their message across. An Ipellie cartoon included in Polar Lines shows an Inuk man struggling to fix his “motor doggy” snowmobile, while another man drives by on his dog team, saying “well brother, that’s progress.”

But laughter is a funny thing, Mosher says.

Some people could, he acknowledges, be offended by a cartoon in Polar Lines drawn by Graeme Mackay for the Hamilton Spectator .

The imaginary map of Nunavut bears the subtitle “what the heck is up there?”

The map shows where you can find an “Eskimo pie ice cream factory,” the “alleged home of the Eastern Arctic hare,” some “affordable beachfront property” and other places, whose made-up names mock southern Canadians’ ignorance and misconceptions about the Arctic and Canada’s newest territory.

Fear, anger and weakness are among the major themes found in cartoonists’ work and in all forms of humour, Mosher says, citing Sigmund Freud, the father of modern psychiatry, who said healthy people recognize their weaknesses and can laugh at them.

“I think that’s why cartoons are so popular. We do that for people.”

And we can expect to see even more cartoons like those in Polar Lines, Mosher says, “because the North is the last frontier and how we handle that, how we deal with that, global warming, and development, is something we should all be keeping an eye on. Isn’t that our job as cartoonists?”

Mosher hopes to accompany Polar Lines as it tours the North sometime in the near future.

But if you can’t wait for the tour, the entire Polar Lines exhibition is posted, with accompanying texts in Inuktitut, Inuinnaqtun, English and French at ITK’s website. 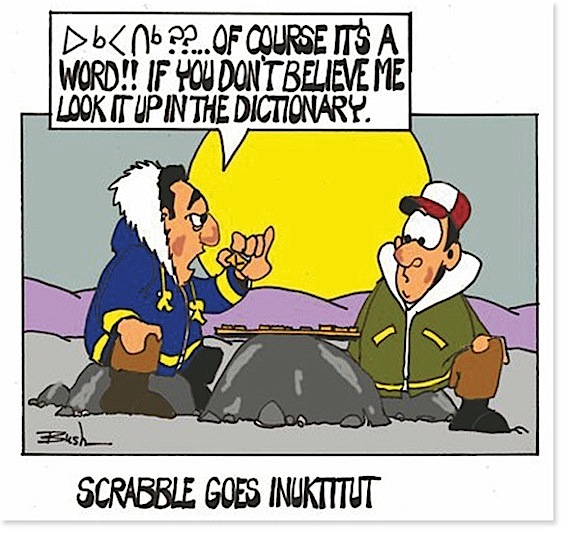