Young Inuit carve out a living on Montreal’s streets 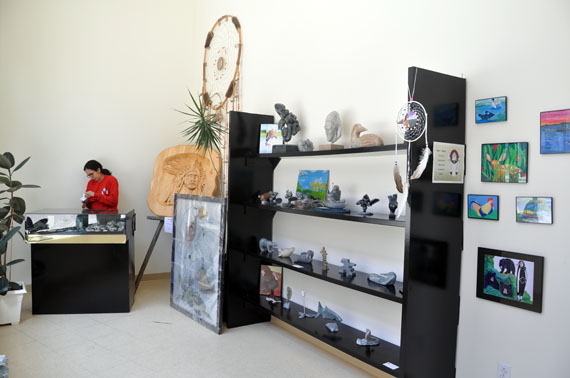 The Native Friendship Centre of Montreal runs a co-operative store at the front of its St. Laurent Boulevard building, displaying work from many Inuit carvers. (PHOTO BY SARAH ROGERS) 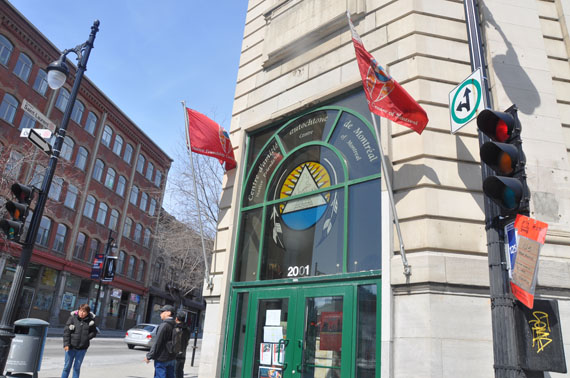 Inuit make up about half of the clients at the Native Friendship Centre of Montreal, located on St. Laurent Boulevard. (PHOTO BY SARAH ROGERS) 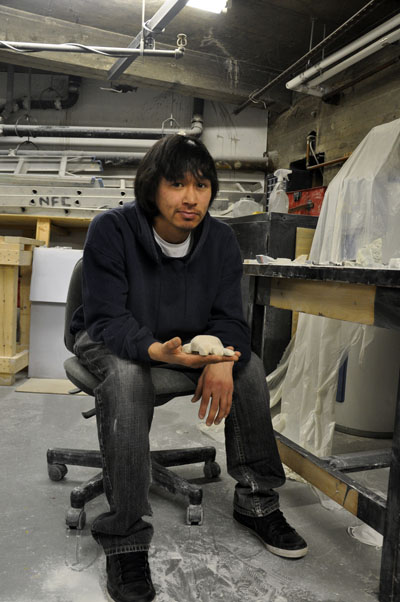 Simiuni Nauya, inside the carving room at the Native Friendship Centre of Montreal, showing the progress he’s made on a small turtle sculpture. (PHOTO BY SARAH ROGERS)

MONTREAL — The eagle feathers painted on the front entrance of the Native Friendship Centre of Montreal might be misleading.

But while the centre is an important venue for the local First Nations community, make no mistake — the NFCM at 2001 St. Laurent Blvd. has one of the strongest Inuit presences in the city.

Walk through the front doors and into its large, sunlit main area, to see about a dozen Inuit men and women sit drinking coffee and chatting. A few young children play with toys on the ground.

The centre offers support to Montreal’s Aboriginal community — many who have recently arrived but haven’t yet learned how to navigate the city.

Visitors can have lunch, do a load of laundry, see a nurse or take part in the centre’s many cultural gatherings.

Downstairs in the NFCM’s youth centre, there’s a steady stream of young men coming in, one with a guitar slung over his back, another playing a computer game.

Behind another door in a cool, cement-floored room, Simiuni Nauya shows the latest soapstone sculpture he’s working on. It’s a hand-sized turtle.

Nauya had carvers in his family, and had tried it before, but he only really started carving seriously in the past year. And he’s been able to do it through the NFCM’s Mikinak youth co-op, which opened the carving room in its youth centre in 2007.

The centre offers soapstone, tools and instruction to its clients from Monday to Friday, along with a co-op boutique upstairs to display and sell carvers’ work to the public.

And thanks to a recent donation from Makivik Corp., the carving room has a new draft table to use power tools on as well as a new ventilation system to filter the dust in the room.

The NFCM is one of five Montreal organizations that Makivik has recently partnered with to help support homeless Inuit.

“The first time I came here was by accident,” said Nauya, 29. “I was just hanging out with a friend and he told me about it … now I come by about three times a week.”

Nauya has become one of the centre’s most promising carvers, moving on from basic inuksuk figures to more detailed sculptures of polar bears and seals balancing on their flippers.

In many ways, Nauya is a typical client at the NFCM — he’s young, he’s male and Inuk.

But he’s not new to the city. Although Nauya was born and raised in Ivujivik, he’s spent the last 20 years in Montreal.

He left Nunavik when he was nine to join his mother, who was already in Montreal, but spent parts of his youth in foster homes.

Now Nauya spends his nights at the nearby Project Autochtones du Québec shelter, and many of his days at the NFCM, along with his brother, Lucassie.

But carving has offered him a chance to develop his skills and make some money doing it. Nauya has already sold three pieces through the Mikinak co-op, and another at a retail art gallery in Montreal’s Old Port.

“I want to get some hard stone to work with — the soft stone breaks too easily,” he said. “I want to try and make a big piece.”

Another roughly two-foot high piece in the Mikinak boutique retails for about $1,400 — half of which would go to the carver once sold.

Part of the Mikinak co-op’s goal is to help its carvers earn a fair price for their work.

Youth centre coordinator Ashanti Rosado said many carvers take their finished works and sell them on the street for whatever money they can get.

“A lot of the motivation is to satisfy an immediate need,” Rosado said. “We thought there was an opportunity to show them to value their art and sell it at a fair price.”

But that’s hard for some the centre’s clients — the vast majority who are low-income,many homeless — to wait six months for something for a sale to come through.

Although the centre’s boutique items are prominently displayed in a front window on St. Laurent Blvd., Rosado said sales really vary: customers will buy four or five pieces some months, but other months, none.

She said Mikinak is flexible; it allows artists to take home their work, but encourages them to give at least a few pieces to the co-op.

The store’s co-op model is based on the co-operative model seen in Nunavik’s communities, Rosado said, and helps to bring some money back to the youth centre, which does not have its own funding.

The centre has also recently opened its carving room up to adults for the first time, she said. 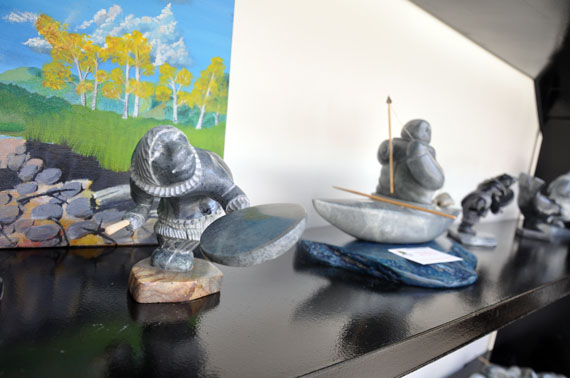 A drum dancer carved by Eeyeechiak Etorolopiaq of Iqaluit on display at the NFCM’s co-operative store. (PHOTO BY SARAH ROGERS)