Char and asparagus might hit the spot this Christmas

Fish and vegetables bake in an air-tight shell 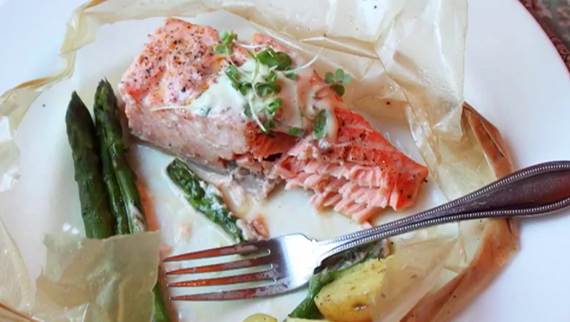 Arctic Char in parchment paper cooks fish and any other vegetables encased in an air-tight shell. (IMAGE COURTESY OF FOODWISHES.COM)

When Nunatsiaq News went looking for holiday recipes to share in our last edition of 2013, we asked Inuit Tapiriit Kanatami president Terry Audla to share one of his favourite recipes or dishes.

Audla sent a recipe for Arctic Char prepared in parchment paper, a method that basically steams the fish and any accompanying vegetables in an air-tight shell, producing a mouth-watering and moist meal.

This version is prepared alongside potatoes and asparagus.

• salt and pepper to taste; and,

2. Take two pieces of parchment paper, fold in half, and cut a half circle starting at each crease. They should look similar to a heart shape when unfolded. Coat each piece of parchment with olive oil (or butter) on both sides. This Youtube video gives a good demonstration.

3. Place potatoes in a sauce pan, cover with salted water; bring to a boil. Reduce heat to medium-low and simmer until tender, about 20 minutes. Drain.

4. Bring a pot of lightly salted water to a boil. Add asparagus, and cook uncovered until slightly tender (about five minutes). Drain, then immediately immerse in ice water for several minutes until cold to stop cooking process. Once the asparagus is cold, drain well and set aside.

5. Place one char fillet, half the asparagus, and half the potatoes in the middle of one side of a prepared parchment paper. Sprinkle with salt and pepper and drizzle with extra virgin olive oil. Fold other half of circle over and seal parchment edge by making overlapping folds around the edge. At the end, fold the last crease in the opposite direction of the rest to ensure it seals. Repeat with the second piece and remaining ingredients. Place pouches on a baking sheet.

6. Bake in pre-heated oven for 15 minutes, remove from oven and allow to sit for five minutes before cutting open parchment. The char is done when it flakes easily with a fork.

Audla also suggests a nice sauce to go with the dish: a mixture of mayonnaise, Dijon mustard, lemon juice and a touch of garlic. Or, he says misiraq (aged seal oil) works well, if you have access to it.