Ottawans lick their fingers at A Taste of the Arctic Premier Eva Aariak poses with Laureen Harper, the Prime Minister’s wife, at A Taste of the Arctic, a formal gourmet extravaganza of food and entertainment hosted annually in Ottawa by Inuit Tapiriit Kanatami. (PHOTO BY LISA GREGOIRE) 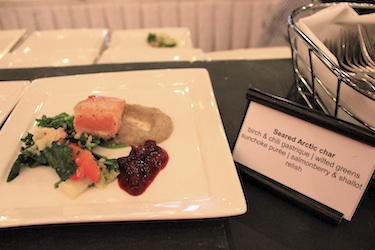 Seared Arctic char was one of many delicious dishes served up at ITK’s A Taste of the Arctic celebration April 29. (PHOTO BY LISA GREGOIRE) 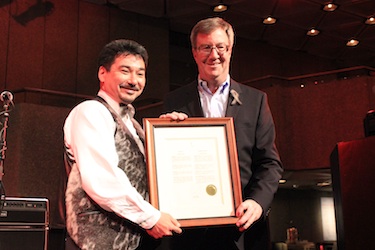 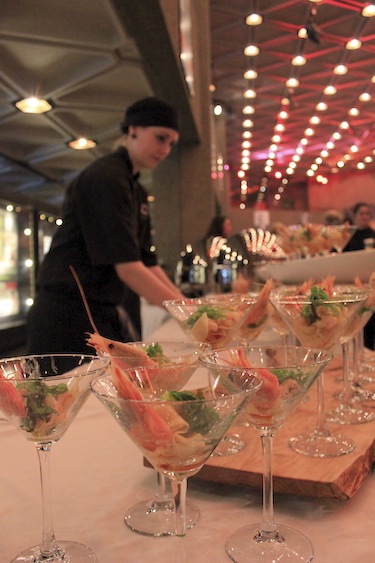 The sautéed Arctic shrimp martinis were one of the most popular items for guests attending Monday night’s A Taste of the Arctic event in Ottawa. (PHOTO BY LISA GREGOIRE)

A Taste of the Arctic, Inuit Tapiriit Kanatami’s third annual celebration of food and entertainment unfolded in a sea of high heels and sealskin April 29 with some of the most delicious offerings of gourmet Arctic foods imaginable.

Chefs served up freshly prepared small plates to more than 200 guests attending the event and also presented tables full of finger foods and sweets that kept hungry patrons licking their fingers for hours in the foyer of Ottawa’s downtown National Arts Centre.

The pepper-seared rare tataki of caribou loin was tender and spicy and the seared Arctic char with birch and chili gastrique, sunchoke purée, and salmonberry and shallot relish, was melt-in-your-mouth exquisite.

At other stations, chefs carved up muskox roast with toasted juniper and mustard seed crust and sweet potato corn bread, and also ladled rich ragout of hare onto rice croquettes and sundried blackberries.

But it had to be good because nearly 400 patrons—a who’s-who of deputy ministers, politicians, business people and northern leaders — paid $199 a ticket to attend.

Harper even tried on a few Rannva-designed seal skin coats after the fashion show.

That fashion show was part of the evening’s entertainment, which included some speeches, some rock and roll, some beatboxing, drumming and dancing, some accordion music and a few jokes from MC Anguti Johnston, who plays “Inuk Qablunaaq” on APTN’s Qanurli show.

Johnston even joined the fashion show, donning a seal skin jacket over a T-shirt that said “Seal is the New Black.”

Food and schmoozing may have been the reason people came to the event but the sustainability of seal skin was the message, with many of the guest speakers repeating the theme of the night: “Show us some skin!”

Audla, Aariak and Aglukkaq publicly expressed their disappointment at the recent decision by the General Court of the European Union to deny ITK their appeal of the 2009 EU ban on seal product imports.

The main stage was then taken over by music, featuring the sexy and sequined Beatrice Deer, DJ Madeskimo and throat-boxer phenomenon Nelson Tagoona. A seal skin fashion show followed and then the evening ended with an accordion square dance with Simeonie Keenainak.

It was a night of great pride for Inuit, said Premier Aariak, munching an Arctic shrimp martini with her fingers because they’d run out of clean forks. It’s these kinds of events, she said—where traditional foods, songs, music and fashion are redefined in a contemporary way—which prove that Inuit culture is thriving.

“Our territory is on the cusp of great change,” she said in her bilingual speech to guests, adding later, “I know that this is only the beginning.”