“It’s all about money” 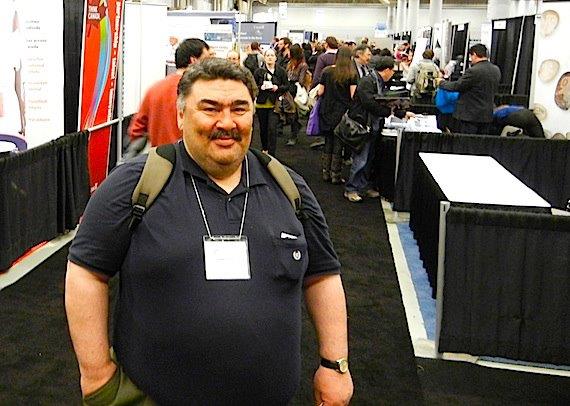 Johnny Oovaut, chairman of the Nunavik Marine Regional Wildlife Management Board, visits booths set up at the International Polar Year conference in Montreal. After listening to what government speakers had to say during the April 23 official opening of the conference, he’s not impressed. (FILE PHOTO)

But there’s an increasing lack of enthusiasm for the 25-year development scheme among some Nunavik Inuit, who feel marginalized by Quebec.

Last Friday, a group of Nunavimmiut walked out of a speech on Plan Nord that Charest delivered — in French only — to a gathering at the Plan Nord trade show, an event which also fed demonstrations outside the Palais des congrès convention centre.

When Charest spoke to the science conference, which has drawn more than 2,000 Arctic and Antarctic researchers, policy- and decision-makers and representatives industry, non-government, education and circumpolar communities, he spoke more in English than in French.

But Johnny Oovaut of Quaqtaq, the chairman of the Nunavik Marine Regional Wildlife Management Board, who is attending the IPY conference, still wonders if Charest listens to people in Nunavik.

In his speech to conference delegates, Charest described how Plan Nord, which he called “magnifique,” will protect 50 per cent of the territory north of the 60th parallel by 2035.

And he talked about how the Quebec government introduced a bill April 17 that Bill 65 includes a framework to protect 20 per cent of those lands by 2020.

Quebec has already said it will work with Nunavimmiut to identify the remaining 30 per cent of lands to be protected by 2035.

But Oovaut says that Inuit in Nunavik don’t feel like they have been adequately consulted about which lands to protect.

To him, it looks as if Quebec already knows what lands it wants to develop, whether or not these are lands that Inuit would like to see protected.

Many of the lands now protected aren’t lands that Inuit use, he said.

“I wish they would just work with us,” Oovaut said. “But he wants his legacy. I don’t think he’ll listen.”

Oovaut would like to see Quebec hold back on mining and development, such as the major iron mine project planned for Aupaluk.

If not, Nunavik should start using its environmental management boards to make sure people are heard.

“It’s all about money,” Oovaut said.

Charest wasn’t the only speaker to talk about the rich resources of the North at the IPY conference.

Duncan didn’t mention his government’s cuts to northern programs and organizations. Instead, he emphasized its commitment to the Canadian High Arctic Research Station in Cambridge Bay.