Chesterfield Inlet bowhead hunters tough it out despite setbacks

Half the hunting party quits; remaining crew determined to continue 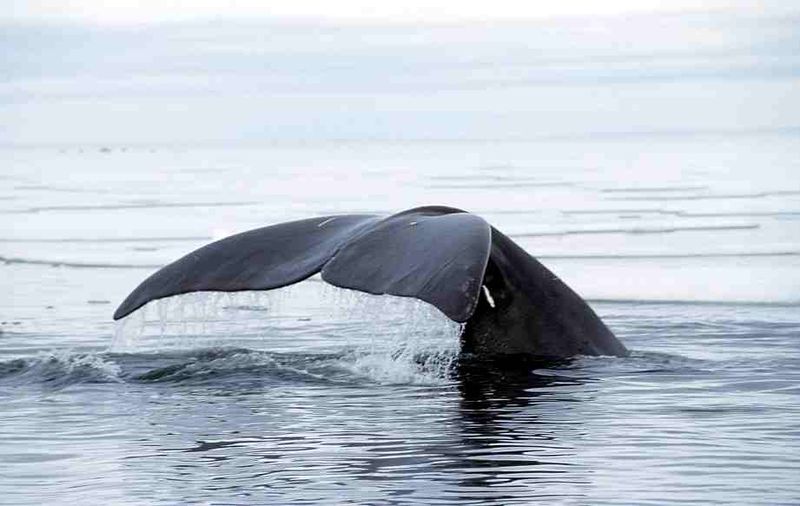 First-time bowhead whale hunters from Chesterfield Inlet have had a hard time spotting the sea mammal in Roes Welcome Sound, over a three-week search. The crew is determined to catch a whale by the end of September. (PHOTO FROM WIKIMEDIA COMMONS)

First-time bowhead whale hunters from Chesterfield Inlet returned to their community empty-handed, but undiscouraged, Aug. 24, after three weeks at sea in search of the elusive sea mammal.

Their search for a bowhead will continue, hunt captain Remi Aggark said, after a week of rest and new planning.

“We’re still ready for a hunt, but we’ve got to do some minor repairs,” Aggark told Nunatsiaq News, Aug. 27. “The hunt is still on, as far as we’re concerned.”

Chesterfield Inlet is one of three Nunavut communities permitted by Fisheries and Oceans Canada to hunt a bowhead whale this year. Communities are selected from each of the territory’s three regions.

Hunters from Clyde River in the Baffin region bagged their animal on Aug. 3, and a crew from Kugaaruk of the Kitikmeot region expects to set out at the beginning of September.

The Kivalliq community counts this as their first bowhead hunt in recent memory. Many challenges were in store for them when the whaling crew, consisting of nine boats with about 20 men, set out Aug. 2.

The first proved to be within the group itself. Less than a week after leaving the community for the waters of Roes Welcome Sound, 150 kilometres east and north of the hamlet, about half of the crew called it quits, and headed back home.

“I can’t really speak for them, but they had their own reasons,” Aggark said.

“Some guys came down with cabin fever,” commented Larry Tautu, vice-chair of Chesterfield Inlet’s Aqigiq Hunters and Trappers Association, which manages supplies, funding and equipment for the crew.

“They didn’t last. But the people who hunt a lot around here, they were the tough ones who hung on with the captain,” he said.

The quitters ate away at the hunting party’s supply of fuel, Tautu said, which “made us lose a few more trips’ worth.”

In the end, the hunting party narrowed down to just seven crew members in three boats.

Although the captain, like most crew members, has hunted narwhals, belugas, and other large sea mammals before, he said pursuing a bowhead was a first-time experience for all of them.

The first challenge “was finding the whale itself,” Aggark said. “It’s a huge animal, but at times it’s hard to spot.”

The crew travelled the length of Roes Welcome Sound, north of Hudson Bay, and it wasn’t until they approached the waters around Repulse Bay that they found a few to pursue.

Another challenge was “to figure out how to hunt this whale,” Aggark said. “Trying to get to the point where we can connect to the whale. But we haven’t managed that.”

Unlike smaller whales, the bowhead, “once it goes down [submerges], there are times when it will stay down a long time. That way, it’s hard to find again.”

The sheer size of the animal adds to the challenge, he said.

Aggark’s seven-member crew came close to a breakthrough towards the end of the day on Friday, Aug. 22, when they spotted a large whale near Repulse Bay. One boat managed to get within striking distance of the animal.

“We hit the whale with the harpoon, but we didn’t connect,” he said. “I heard from the guys that it just bounced off.”

The animal proved to be huge, even by bowhead standards, measuring almost 60 feet – or 18 metres – in length.

“Maybe it had a tough skin,” he laughed, “but they tried.”

The hunting party lost sight of the animal as darkness began to fall. Fatigued and running short on supplies, the party returned to their community the next day, by noon.

The crew was happy to see their friends and family after a three-week absence, Aggark said. The break has also given the crew a chance to revise strategy.

“I think we have a much better idea of how to approach a whale, and be more cautious,” Aggark said from Chesterfield Inlet, Aug. 27, on his third day of rest and recuperation.

The group also set a more modest goal: to take an animal 10 to 12 metres in length. They hope to take to the sea again by Aug. 31 at earliest, weather permitting.

Until then, the community’s hunters and trappers association will assess funding and supplies, to ensure hunters can hit their goal of catching a bowhead by the end of September.

“We’ve still got time,” Tautu commented. But the weather is going to get pretty unpredictable in September.”

Aggark said he looks forward to heading back out to sea with his small, but committed crew.

“For the guys that had a chance to come up on a whale, and experience the sight of the huge mammal, right in front of you – that was a great experience,” he said.

“We never thought we would have this opportunity.”