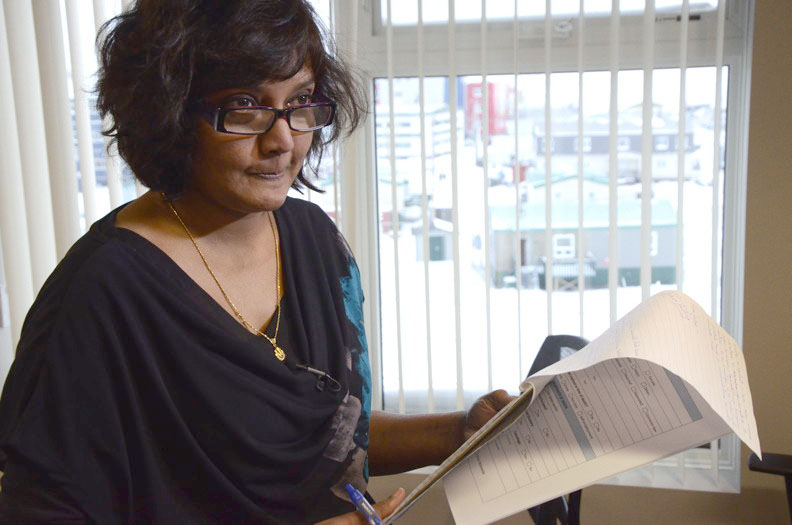 Nunavut’s chief coroner, Padma Suramala, displays a copy of a coroner’s research form to members of the media at a press conference Jan. 16 in Iqaluit. The form, which coroner’s have to complete after attending the scene of a death, “collects detailed demographic information of each and every suicide and records the circumstances surrounding each death in detail,” Suramala said. (PHOTO BY DAVID MURPHY)

Nunavut’s chief coroner, Padma Suramala, is calling a public inquest into what she called the “disheartening” number of suicides in the territory.

The announcement, made Jan. 16 in Iqaluit, comes after reports that revealed 45 people died by suicide in 2013, Nunavut’s worst year since it became a territory in 1999.

Three Nunavummiut have already taken their lives in 2014.

Suramala said her office is “greatly concerned of [the] growing epidemic rate of suicides in the territory.”

For that reason, the chief coroner’s office will conduct a “discretionary inquest” under the Coroner’s Act that will involve selecting, at random, three of the 45 suicide deaths in Nunavut in 2013.

The inquest, to be held in Iqaluit, will be open to the public and to media.

“The intent of the inquest is to build on the work already done by the chief coroner and the community coroners with respect to suicide,” Suramala said.

The inquest will “highlight risk factors and warning signs, raise public awareness and facilitate making recommendations to avoid preventable deaths in the future,” she said.

Members of the six-person jury will be chosen from the public. Their findings and recommendations could be announced to the public some time in the fall of 2014, Suramala said.

Suramala said the job of a coroner is “difficult and distressful” when investigating and determining the causes of deaths.

But through those investigations, the coroner’s office “collects detailed demographic information of each and every suicide, and records the circumstances surrounding each death in detail,” Suramala said.

“The coroner’s office collects this data to assist in prevention strategies and assist in decreasing the rate,” Suramala said.

She also released statistics showing the breakdown of the territory’s suicides by community.

Iqaluit topped the list with 10 suicide deaths in 2013, the city’s second highest number since it became the territorial capital. Eleven suicides were recorded in Iqaluit in 2011.

Since Nunavut was created in 1999, the territory has lost 434 people to suicide – the vast majority of whom were male.

Six of those suicide deaths were by non-Inuit.

The data showed that suicide victims in 2013 ranged in age from 11 to 72 but there was no breakdown by age group.

“It’s very disheartening to see the rates. It’s not easy, even for a coroner, for us. It’s very stressful to go to each and every scene,” Suramala said.

“The office of the chief coroner conveys our deepest sympathy to any Nunavummiut who have lost their loved ones and have been affected by suicides,” she said.