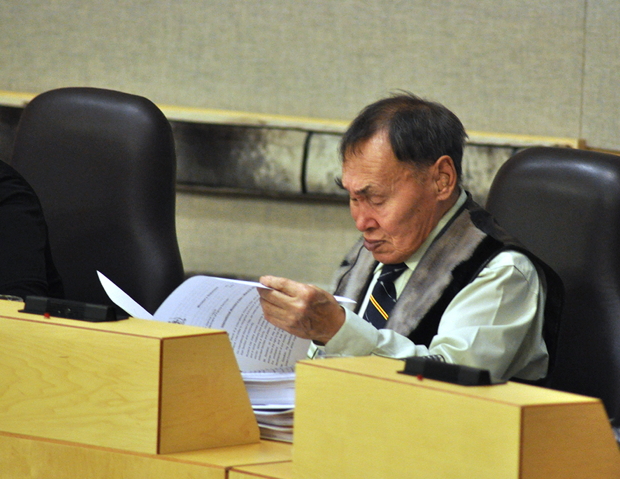 Quttiktuq MLA Isaac Shooyook says that words in the Child and Family Services Act that say “parents should use methods other than force by way of correction towards their children or in the discipline of their children” are in conflict with Inuit culture and should be removed. (FILE PHOTO)

Quttiktuq MLA Isaac Shooyook wants the Government of Nunavut to remove words from the Child and Family Services Act that say “parents should use methods other than force by way of correction towards their children or in the discipline of their children.”

Shooyook raised the issue with Family Services Minister Johnny Mike in question period March 9, asking if he would remove the words, saying they conflict with Inuit culture.

“I am of the firm belief that the wording in this section should be removed from legislation because our cultural beliefs dictate that children have to be lovingly corrected with a small slap, which I have advocated, but only in the context of traditional Inuit child disciplining laws and cultural practices,” Shooyook said.

The words that Shooyook objects to occur in a section that states the law’s basic principles.

Shooyook has made statements on child rearing and Inuit Qaujimajatuqangit several times over the course of the legislature’s winter sitting, delivering two statements prior to questioning the Family Services minister.

In a statement Feb. 28, Shooyook recommended the assembly recognize “the good aspects of Inuit customary child rearing techniques and counseling practices,” arguing that the immediate resolution of conflicts can contribute to better lives.

“If we practice some of the child rearing techniques and resolution practices, perhaps Inuit society challenges we face today, although not immediate, would allow our lives to be easier,” he said.

Days later, on March 6, Shooyook rose to clarify what he meant in his previous statements on the disciplining of children, and he defended slapping young children on the hands.

“What I am trying to clear up here is the age at which Inuit children were slapped on the hands. This slapping of the hands only occurred around the ages of four, five, and six where the children are learning social skills,” he said in his statement.

He added that “it seems our fellow residents who aren’t Inuit and understand Inuit culture misunderstood the gist of my comments about children and discipline. It was meant towards the fathers and mothers and the traditional disciplinary actions.”

But he said he doesn’t want children to be abused.

“I don’t want any older children to be beaten or to be disciplined with any type of stick or lash. Instead, the discipline I reference is specific to the ages I mentioned, as they have to know how to socialize and to respect others.”

In his reply to Shooyook’s March 9 question on the Child and Family Services Act, Mike replied that his department must deal with different cultures that hold different views on disciplining children.

“Nonetheless, what can seem to be a difference between cultures is the need to protect the child who may be at risk, and due to the need to protect children, it sometimes clashes with Inuit cultural values and seems foreign to many Inuit,” Mike said.

Any amendment to Nunavut’s Child and Family Services Act could only occur after extensive legal research and other work, Mike added.

Shooyook also complained that many Inuit struggle with the Child and Family Services Act because there is no Inuktitut version of it.

“Can the minister elaborate on the reasons why such a critical piece of legislation has not been translated into Inuktitut?” he asked.

Mike promised Shooyook that he will look into the issue.

Nunatsiaq News contacted the Nunavut Representative for Children and Youth office for comment on the issue, but did not receive an immediate reply.