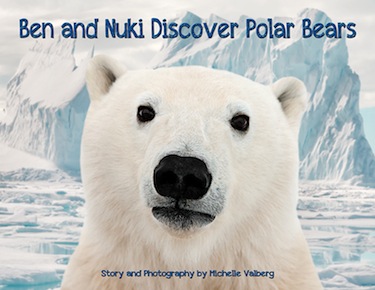 “Ben and Nuki Discover Polar Bears” by Michelle Valberg tells the story of the friendship between two boys, Ben and Nuki.

That’s a familiar story that gets a new twist in the children’s book, Ben and Nuki Discover Polar Bears by Michelle Valberg, who tells about two seven-year-old boys, Ben from the South, and Nuki, from an Arctic community, who first meet in the South and then continue their friendship in Nunavut.

Nuki in his caribou outfit and Ben in his parka explore the tundra together, talk about their favorite foods (ringed seal and pizza), and learn about polar bears from Nuki’s grandmother, Elisapee.

Later, they come across a hunter named Johnny, with whom they watch the northern lights.

On Ben’s last night in the Arctic, the two boys wish for northern lights to appear.

Nuki remembers his grandfather telling him an old Inuit legend.

“The northern lights are spirits. If you click your finger nails they go away, but if you whistle, they will come closer.”

The boys whistle, and “to their joy and amazement, the northern lights appeared and danced in the sky.”

The boys are modeled after Valberg’s seven-year old son and the seven- year-old son of a friend who works at the Ottawa Inuit Children’s Centre.

“The best thing is when parents say they’ve enjoyed it too,” said Valberg, whose photos from her 26 trips north help illustrate the book.

Vallberg wanted to “show what it is we have in the North. I wanted to show that it wasn’t just that [vast] white tundra,” she said.

The proceeds from the book will go to Project North, a non-profit organization Valberg helped create.

Project North, a Canadian organization dedicated to improving the lives of children in Canada’s North, has suited up Nunavut children in 11 communities, providing $300,000 worth of hockey equipment to kids who otherwise might not be able to play the sport.

So far this year Resolute Bay has an application for hockey equipment so that kids in that High Arctic will be able to use their community’s new arena.

“The funds [by Ben and Nuki Discover Polar Bears] raised will help do that,” she said.

The book isn’t in Nunavut yet but can be purchased online at bendiscovers.com or at Valberg Imaging, 111 Sherwood Drive, Ottawa, Ont. K1Y 3V1 for $20. 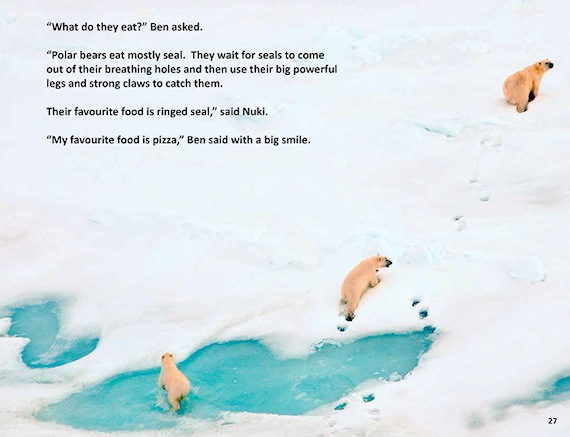