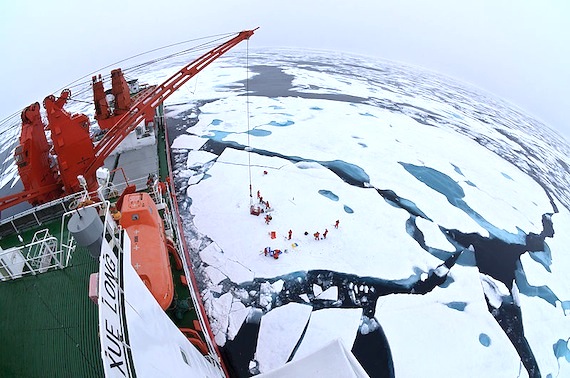 A view of a drift ice camp in the middle of the Arctic Ocean as seen from the deck of China’s icebreaker, the Xue Long. (FILE PHOTO)

China plans to expand its study of the Arctic’s resources as well as the region’s shipping and economic potential, the Chinese institute for polar research said June 6 on the official English-language website of the China News Service.

ENCS said the Polar Research Institute of China plans to set up a China-Nordic Arctic Research Centre in Shanghai to increase awareness and knowledge of the Arctic, promote cooperation for its sustainable development, and provide opportunities for Chinese and Nordic researchers to conduct Arctic research.

“The Arctic is a region where frequent economic activities are taking place,” Yang Huigen, head of the Polar Research Institute of China, told the China Daily June 5 at the first symposium on China-Nordic Arctic cooperation in Shanghai.

Cooperation with the member nations of the Arctic Council — where China recently gained observer status May 15 — is necessary if China wants to take part in resources development in the Arctic, said Yang.

ECNS said the “Western world has a preconception that China covets the Arctic as it is rich in oil and gas.”

But Yang said these resources “are not ours.”

“China’s partnership with Arctic countries in the sector will come naturally as it is part of the widening economic cooperation among countries under the context of globalization,” he said.

China’s announcement about its new Arctic research centre follows on India’s announcement that it plans to build a $144-million icebreaker to conduct “scientific and business exploration” in the polar regions.

China has also commissioned a new polar icebreaker, its second after the Xuelong, or Snow Dragon, which is due to enter service in 2014.