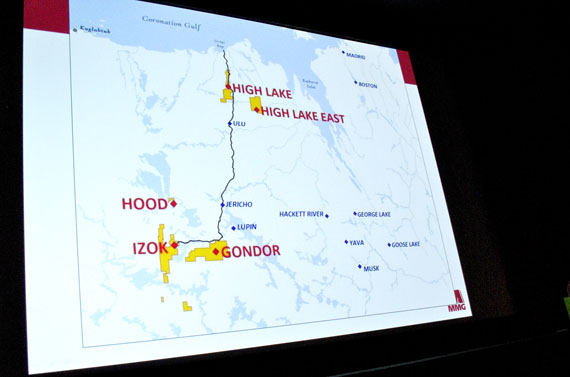 This map shows the expensive road and port that MMG proposes building for its Izok Lake corridor project. (PHOTO BY JIM BELL) 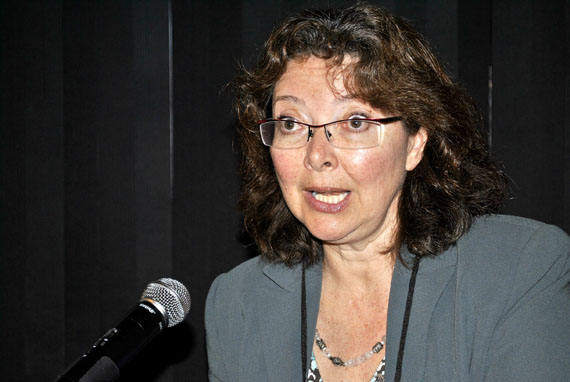 Charlotte Mougeot, MMG’s environmental approvals manager, said April 19 that her company is moving aggressively toward development of the Izok lake corridor project in the western Kitikmeot. (PHOTO BY JIM BELL)

If the Chinese-controlled Mineral and Metals Group meets their tight, ambitious schedule, huge trucks laden with zinc concentrate will rumble along a 350-kilometre all-weather road from the western Kitikmeot region’s Izok Lake zinc-copper deposit to a port on Coronation Gulf by 2020, delegates at the Nunavut Mining Symposium in Iqaluit learned last week.

But that’s still a big maybe.

MMG’s board must still approve a feasibility study that won’t be completed until early in 2013.

“It’s basically a big infrastructure project that happens to have two mines along the way,” Charlotte Mougeot, MMG’s environmental approvals manager, said April 19 at the Nunavut Mining Symposium in Iqaluit.

MMG’s road-port project will be similar to the one used at Teck’s Red Dog mine near Kotzebue, Alaska, Mougeot said.

The Izok Lake site was discovered in the late 1950s by geologists working for Texas Gulf Inc. who followed a trail of zinc sulphide boulders scattered across the land tens of thousands of years ago by receding glaciers.

They tracked that boulder trail back to Izok Lake — but since then not a single pound of ore has ever been sold or put to productive use.

The much-ballyhooed Izok Lake deposit was believed to be a sure thing in the early 1990s when one of its many owners, Metall Mining Corp., tried to move it into production.

Metall’s plans called for a $350-million open-pit mine at Izok Lake, and a $50 million deep-sea port on Coronation Gulf connected to the mine by a road.

But the project tanked in 1992 when the federal government refused to build the road and port for them and world zinc prices sank to historic lows.

Metall mothballed Izok Lake and eventually sold it to Inmet Mining Corp., who sat on the project but did little to develop it.

The on-again, off-again property passed through the hands of many owners, none of whom ever figured out how to economically mine and transport the region’s huge stores of zinc, copper and lead.

That’s because Izok Lake lies 350 kilometres from the ocean, just north of the Nunavut-Northwest Territories border, a location that demands a prohibitively expensive all-weather road and port.

One of those properties was a shopping basket of lead-copper-zinc sites in the western Kitikmeot that Wolfden Resources Inc. had sold to Zinifex, the company that formed one-half of the short-lived Oz conglomerate.

Wolfden’s canny shareholders may be the only people who ever profited from Izok Lake.

In 2007 they accepted a $363-million share-purchase deal offered by Zinifex, which morphed into Oz a year later and then came close to going belly-up in the 2008 recession.

When China Minmetals, MMG’s parent company, snapped up the Oz portfolio of mineral properties, they inherited an old transportation plan for Izok that Wolfden had developed.

“We studied 27 different alternatives but we ended up back at the 2006-07 plan and stuck to it,” Mougeot said.

Under that scheme, MMG will build two mines: an open pit operation at Izok Lake, and another mine at High Lake, which lies about 50 kilometres south of Grays Bay, their proposed port site on Coronation Gulf.

The key element of their plan, and the most expensive, is a 350-kilometre all-weather road and port.

This road will head east until it hits the company’s Gondor property, then turn north just past the Lupin mine, through the mothballed Jericho mine and through High Lake, the second zinc-copper mine MMG proposes building.

From High Lake, the road will continue on to Grays Bay on Coronation Gulf, which lies east of Kugluktuk and just west of Bathurst Inlet.

At Grays Bay, MMG will build a port that for three months of the year will ship ore in two directions through both ends of the Northwest Passage.

Five shipments would head eastwards and, on their return voyage, head west toward the Pacific, Mougeot said.

And that’s the highly-publicized Bathurst Inlet Road and Port proposal.

That’s because the BIPAR does not connect High Lake with Izok Lake. Mougeot said the only way to make the MMG project viable is to connect the two with a road to Grays Bay.

To make it work, the company will combine the two sites but build only one mill — at Izok Lake.

Big trucks will ship zinc concentrate from the Izok milling plant to Grays Bay, where it will be stored until the summer shipping season.

On their return trip, those trucks will pick up crushed ore from High Lake and backhaul it to Izok for milling.

This system, first developed by Wolfden, is the only plan that can make the mine work economically, Mougeot said.

Another factor is the global price of zinc, which is now beginning to rise. Many analysts believe this price will rise even further in the foreseeable future, when existing zinc mines exhaust their ore bodies.

At the same time, global demand for zinc, a key industrial commodity, is sure to rise because of economic growth in China and India.

“If you’ve been following some of the predictions for the use of zinc and copper, it’s being driven by development in China and India and the growth of middle-class construction projects,” Mougeot said.

One existing producer, the Century mine in Australia, which MMG acquired from Oz, is expected to close around 2016, while Xstrata’s Brunswick mine in Canada will likely shut down in 2013.

So MMG hopes that its Izok corridor project and another property, the Dugal mine in Australia, will replace that lost production.

Mougeot said 75 per cent of Minmetals Resources, MMG’s parent, is owned by the Chinese government. The other 25 per cent trades on the Hong Kong stock exchange.

Almost all of the Izok Lake deposit lies under the lake. This means Izok Lake will be drained to provide for an open pit operation, and that measures will taken to ensure that nearby Itchen Lake will not be polluted, Mougeot said.

She said the company is already talking to the Department of Fisheries and Oceans and hunters and trappers organizations about compensation for the loss of fish habitat.