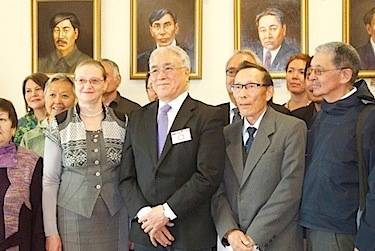 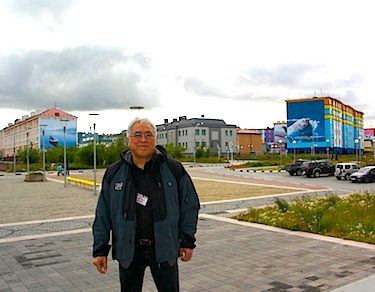 Twenty years after Inuit from Chukotka finally met with other Inuit from Alaska, Canada and Greenland in Inuvik, Inuit in Chukotka — who call themselves Yuit or Yu’pik — last week welcomed a delegation from the Inuit Circumpolar Conference to their region.

Among the visiting Inuit: Duane Smith, the ICC-Canada president, who worked as a volunteer during the 1992 ICC assembly in Inuvik, which Inuit from Chukotka were finally able to attend.

Some people separated by the “ice curtain” separating Chukotka and Alaska hadn’t seen their relatives across the Bering Strait for decades.

Now that contact, while it’s not regular and remains hard to organize, is possible.

Anadyr is “still a remote location,” Smith said of the town of 13,000, located in the far north-east of the Russian federation, near the mouth of the Anadyr River.

That meant the group from ICC had to first travel to Anchorage, and then by charter from Nome to Anadyr.

There, the Russian regional council in Chukotka, which works closely with the Yu’pik Society that represents Chukotka’s Inuit locally and nationally, organized a packed schedule of events.

Many of these were official — such as a formal renewal of a friendship agreement between the Chukotkan state government and ICC.

And some events were cultural, such as displays of dancing from Yu’pik and other local indigenous peoples. Those performances, said Smith, reached by telephone at the Seattle international airport as he headed home July 30, were memorable — a chance “to see everyone be happy and perform.”

Some of the dances, such as the invitational dances, when everyone was invited to participate, reminded Smith of dances from his region.

The ICC delegates also visited a children’s residence for orphans as well as local homes where hosts served Smith served a meal of local foods that included cloudberries and salmon.

The agenda for the ICC executive members also included discussions on Arctic Council business and the United Nations Permanent Forum for Indigenous Issues, as well as planning for the 2014 ICC assembly in Nain, Labrador.

The ICC executives also suggested that someday Chukotka could hold an ICC assembly in Russia — but that might take another 20 years to realize, Smith said.

About 1,700 Yu’pik live in Chukotka in nine communities around the far-eastern peninsula, where they have suffered through the years of economic crises and political turmoil in Russia.

Birth and mortality rates from Russia’s far north show that Yup’ik in the 1990s were having fewer babies and are dying, on average, eight to 15 years earlier in developed countries. From 1986 to 1998, the birthrate in Chukotka, plummeted from 40 births per 1,000 to 21, nearly a 50 per cent drop.

By 2001, the situation had become so dire that ICC-Canada started a drive to help the Inuit of Chukotka.

Inuit across northern Canada donated the money to ICC’s fundraising campaign. The organization joined forces with the North Slope Borough in Alaska to send hunting, fishing and trapping equipment to Chukotka and worked with the International Red Cross to help supply essential items to the impoverished population.

The Red Cross is still in Chukotka, said Smith, but the situation, at least in Anadyr, where buildings are painted bright colours to ward off the winter blues, has improved.

Tatiana Achirgina, the Chukotka president of ICC, said at a panel during last spring’s International Polar Year conference in Montreal, that the riches of her homeland used to flow south like a mighty stream — but they left northern people with only a trickle of that wealth.

And the people were left sick: health experts say the incidence of diseases such as stomach cancer, respiratory tract illness and lymphatic and skin cancers rose, while life expectancy fell to between 40 and 45 years due to the environmental pollution, alcoholism and poor health care.

Today, although there’s an “explosion of activity” in mining and mineral exploration, Achirgina said life is easier in Chukotka as a new generation of developers eyes the underground wealth of the region.

The vast copper and gold deposits of Chukotka stand to make the region rich and “that is a good thing” for people who live there, she said — a reflection confirmed by Smith who said the situation had “vastly improved” since his first visit several years ago to the region. 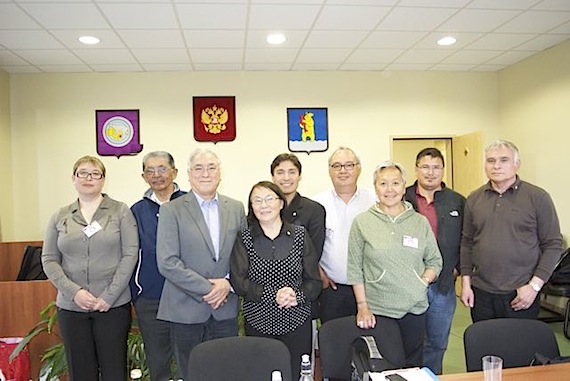 Members of the Inuit Circumpolar Council met in Chukotka during the recent ICC visit to the Russian state. (PHOTO COURTESY OF KIRT EJESIAK)