Climate change could change the way that seals mate: research

Warmer waters with fewer nutrients could force some species to form colonies, harems 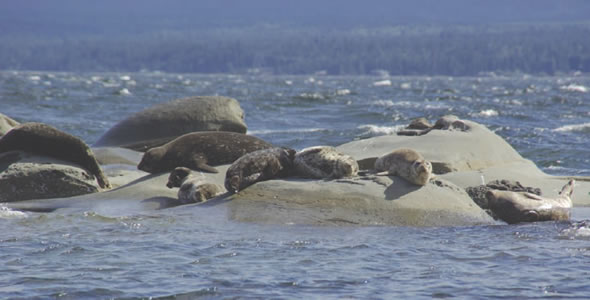 New research suggests that warming Arctic waters could change the mating habits of seals and other pinniped species who live in the North. (PHOTO COURTESY OF DFO)

New research suggests that Arctic pinnipeds, the sub-order of species that includes seals, sea lions and walruses, might change their mating habits — and acquire harems — as the climate around them gets warmer.

Carleton University research, published this week in the journal Evolution, shows that sexual dimorphism — a difference in physical traits between a male and female of the same species — has existed in seals and walruses for well over 20 million years.

This isn’t the case in Arctic environments, however, but that may change.

Males in many species of pinnipeds are often much larger than their female counterparts, sometimes even twice as large, and this has implications for how they mate and behave.

Sexually dimorphic pinnipeds usually mate in a group or harem, with one male mating with a larger group of female mates.

Researchers such as Carleton University masters’ student Thomas Cullen had long wondered why sexual dimorphism exists in many seals and walruses and when this trait evolved.

By studying fossils of seal skulls and comparing them with modern-day species, Cullen determined that sexual dimorphism existed in seals some time between 20 million and 27 million years ago.

With that timeline in mind, Cullen and his fellow researchers can now pinpoint why that happened.

It was likely at a time when the Earth was experiencing major changes in climate and circulation changes, Cullen said, when harem colonies could have gathered at sites where ocean currents move nutrients from deep water to more shallow water.

“We think they were gathering where there were plentiful food sources,” he said, “and that concentration of pinnipeds pressured them into developing the harem mating system and sexual dimorphism.”

So what does that have to do with pinnipeds living in an Arctic environment?

Not many Arctic species show sexual dimorphism, Cullen said, pointing to the grey, bearded and ring seal — and that’s because the Arctic waters that make up those animals’ habitat is already rich in nutrients.

But that could change.

“If waters are warming, that would lead to their being (fewer) nutrients in Arctic regions,” Cullen said.

“This could put more pressure on pinnipeds in the polar regions to form colonies and, as a result, harem behaviour.”

Cullen’s research didn’t touch on how group mating impacts breeding within a certain species, compared to pinnipeds that mate with random, single partners at a time.