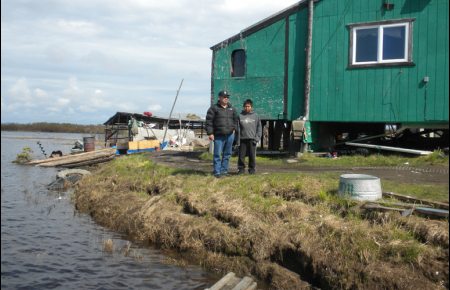 Melting ice cellars and rotting whale meat, the arrival of beaver fever in a once-pristine land, and water supplies that might go dry are just a few of the health risks posed by climate change in the Arctic.

Now, in a newly released fifth report examining looming threats to villages, the Center for Climate and Health at the Alaska Native Tribal Health Consortium zeroes in on the Arctic Alaska village of Selawik, population 830, about 70 miles southeast of Kotzebue, which is said to be sinking as permafrost thaws.

The Inupiat Inuit village has been called the “Venice of Northwest Alaska” because of the settling ground. Stairs to some houses no longer reach the ground. Shifting water pipes break more easily.

And some homes tilt so much toilet bowls can’t fill with water for flushing, forcing families to return to the old-fashioned honeybucket.

The Inupiat community straddles both sides of the Selawik River, in a roadless coastal plane pitted with lakes. The village now experiences more rain and snowfall than it did five decades ago. Average monthly temperatures have risen during that period, including by four degrees in January, according to the report.

Threatening the village are sinkholes that have formed beside the river, sending landslides of silt, rock and gravel tumbling into spawning areas for sheefish — an animal that plays a key role in subsistence diets in the region.

The sinkholes are thermokarsts formed when ice beneath the tundra vanishes. They produce scooped-out swaths of earth, making them a particularly visible effect of climate change. Legions of them have formed in the last decade, but the biggest one in North America emerged eight years ago about 175 miles upstream of the village.

The Selawik Slump, as it’s called, is a massive pit in the ground possibly caused by the melting of “old, buried glacier ice,” according to the Selawik National Wildlife Refuge. Up to eight stories deep, its already grown to nine square acres.

“It looks like a big asteroid hit the earth and made a crater,” said James Beylund, Selawik’s acting city administrator.

It’s expected to keep growing, for years. The crater’s steep headwall is steadily “marching” away from the river as chunks of ice and rock crash to the ground, said Lee Anne Ayres, manager of the Selawik National Wildlife Refuge.

“It’s dramatic,” she said. “There’s constant running of water, rocks breaking off that headwall, chunks of ice falling down.”

The headwall moves away from the river several feet each summer. It could expand for years: experts say it may until it reaches a ridge about a quarter-mile away.

Refuge scientists are working with others experts, including with the Alaska Department of Fish and Game, to learn if all that sediment has hurt sheefish reproduction.

About 50,000 sheefish spawn in the river and winter in Kotzebue Sound, near the hub city. The Selawik River is one of only two spawning rivers for the region’s sheefish, among the largest in the world and reaching up to 60 pounds.

Researchers expect to see the first glimpse of the Slump’s consequences this summer, when sheefish return to spawn.

“The first cohorts of fish are just starting to come back into the population, so this next year will really be revealing as to whether all the fish survive,” she said.

In recent years, three smaller thermokarsts have opened up downriver from the Selawik Slump, within 30 miles of the village, said Ayres. Murky, hazy water

The sinkholes are pushing silt into the river, and all along the banks “erosion has blown out of proportion,” said Beylund. After one big landslide, the river turned murky for three solid months.

The village gets it drinking water from the river, and the haze has become a common problem. Local officials regularly issue water-boiling notices that last for weeks because drinking water straight from the tap seems to have caused stomach sickness and other problems, he said.

He’s hoping those notices will end soon. Engineers with the tribal-health consortium are installing a state-of-the-art water filtration system.

Elsewhere in Selawik, according to the report, boardwalks for four-wheelers rise and fall in waves because of the thawing tundra.

Large, insulated water and sewer pipes snaking above ground are prone to break and freeze as the tundra sinks. That’s because joints open when pipe-supports or houses shift.

To help repel the subzero cold, some locals have wrapped caribou skins or blankets around the pipes, but that doesn’t always work.

Erosion is happening everywhere on the river, threatening dozens of homes. “My home at Nuvugauraq Point is sinking,” elder Daniel Foster Sr. is quoted saying in the study. “It is happening fast. I hope the point does not break off like a piece of cake.”

The village’s two long bridges have sunk more than two feet since they were built with Bureau of Indian Affairs funding in the 1980s, residents say.

One side of the Airport Bridge suffers from ice-jacking that’s lifted part of the structure. One side of the Rainbow Bridge is settling and shifting. Since the bridges have no roads going to them, they don’t qualify for regular state inspections.

The eroding river banks are moving closer to the Rainbow Bridge. Like the Airport Bridge, it still feels solid. But that could change if the river continues to cut away the ground beneath.

“It hasn’t affected it yet but if it goes a few more feet, the bridge will start moving and it will be dangerous,” Beylund said.