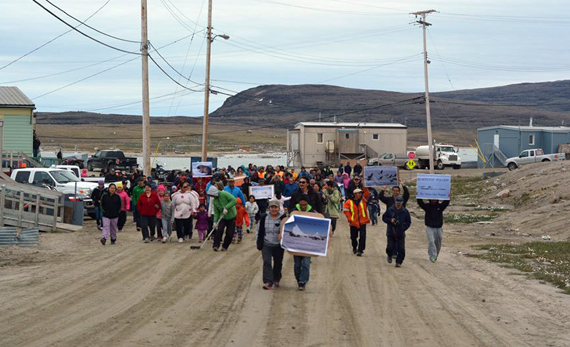 More than 100 people who took to the streets of Clyde River — and in Arctic Bay — this past July 23 to protest the National Energy Board’s approval of seismic testing in Baffin Bay and Davis Strait. (FILE PHOTO)

A lawyer representing groups in Clyde River filed an application at the Federal Court of Appeal July 28 that seeks a judicial review of a recent decision by the National Energy Board to permit a five-year seismic testing project in Baffin Bay and Davis Strait.

“I’m excited and scared,” said Natanine, from the hamlet office in Clyde River. “Excited because it’s happening. Our appeal has been filed. Scared because I’ve never done anything like this before.”

Hasan filed the application at a Federal Court office in Toronto. (See document embedded below.) Right now, it’s not clear where the action would be heard, but lawyers are arguing it should be held in Iqaluit.

Hasan said it’s not unprecedented for a case such as this to be heard in a local jurisdiction, but the court may decide to hold the hearing in Ottawa or Toronto instead.

But it’s clear that Clyde River’s lawyer will argue that the NEB decision is a breach of Section 35 of the Constitution, which guarantees existing Aboriginal rights, and a breach of the Nunavut Land Claims Agreement.

“The NEB’s decision violates the fundamental rights of the people of Nunavut,” Hasan said in a news release.

“The federal government has a solemn constitutional obligation to meaningfully consult and accommodate the people of Nunavut on any issues affecting their Aboriginal or treaty rights. That didn’t happen here. Once again, the NEB was a rubber stamp for the energy industry.”

The Federal Court of Appeal, which sits in different parts of the country, is set up to hear appeals on decisions made by federal boards and tribunals.

The NEB announced its approval of the dispute seismic testing proposal this past June 26, following an application by a group of companies called Multi-Klient Invest, or “MKI.”

That sparked protests July 23 in Clyde River and Arctic Bay, where residents expressed deep opposition to the idea.

The application asks for a permanent injunction against seismic testing in Davis Strait and Baffin Bay.

While the application talks about the impact seismic testing could have on fish and marine mammals, it also points out potential gaps in the consultation process.

“The proponents… were unable or unwilling to show that the community’s rights and interests would be protected.

“In its environmental assessment conducted in connection with the project, the NEB noted that the proponents were ‘unable to answer numerous questions from community members’ about potential adverse impacts of the Project on marine life and the community,'” the application states.

And while the companies proposing the seismic testing were required to submit a Benefits Plan to the federal minister of aboriginal affairs, none of the affected communities has been shown a draft of that plan.

Hasan is arguing that the NEB failed to honour the Nunavut Land Claims Agreement, failed to apply Inuit traditional knowledge, failed to consider the cumulative impacts of oil and gas development on the environment and nearby residents and failed to properly consult and accommodate Aboriginal peoples impacted by the project.

All these arguments have yet to be proven in court.

Hasan has 30 days from today to file all the evidence in the case, including what was put before the NEB during the initial hearing, as well as supplementary affidavits from people in Clyde River attesting how this might impact their traditional lifestyle, and experts who can provide evidence on the impact of seismic testing on marine environments.

The respondents, who include the NEB, the Attorney General of Canada as well as the seismic testing consortium of companies, then have 30 days to submit their body of evidence to prove why the testing should go forward.

Another 30 days follows during which both sides can rebut the other’s evidence. Then they have a final 30 days to sum up their legal arguments in something called a factum.

After that, it’s up to the Federal Court of Appeal to set a hearing date and location. Hasan said the hearing would likely last one or two days.