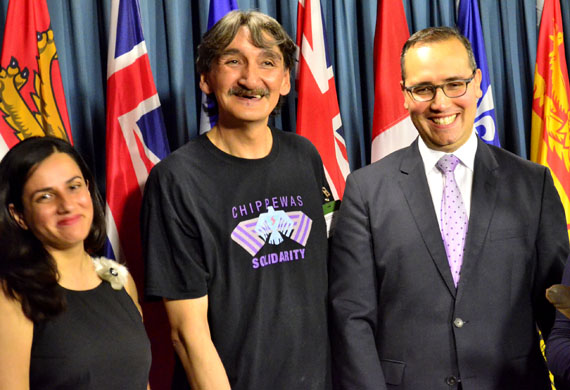 After Inuit association lawyers told them three years ago that their case was hopeless, Jerry Natanine and the people of Clyde River have proven this week that the naysayers were wrong.

The Supreme Court of Canada on July 26 quashed the National Energy Board’s June 2014 authorization of a five-year seismic testing project in the waters of Baffin Bay and Davis Strait, east of Baffin Island.

That’s because the NEB failed to properly carry out the Crown’s duty to consult the Inuit of Clyde River on a development project that affects their Aboriginal and treaty rights, the Supreme Court said.

“It was a seemingly impossible case… Now today we are on the right side of justice. We were saying the National Energy Board was wrong and now it is confirmed that they were,” Natanine said at a press conference on Parliament Hill.

The Hamlet of Clyde River, the Nammautaq Hunters and Trappers Organization and Natanine, the community’s former mayor, took the case to the Supreme Court in October 2015, after the Federal Court of Appeal had dismissed the community’s first attempt to overturn the NEB decision.

Today’s ruling follows a hearing on the issue the Supreme Court eventually held Nov. 30, 2016 in Ottawa, together with a case involving the Chippewas of the Thames First Nation, who opposed an NEB decision on a pipeline running from Sarnia, Ont. to Montreal through their territory in southwestern Ontario.

Natanine said the people of Clyde River could not have mounted their appeal without money and moral support from Greenpeace, who pitched in to help Clyde River when everyone else rejected them.

“But when we reached out, Greenpeace answered our call,” Natanine said.

He said he was disappointed, at first, with the non-supportive responses that Clyde River received from Nunavut Tunngavik Inc. and the Qikiqtani Inuit Association, two organizations that are supposed to be guardians of Inuit rights.

“They never gave the reason why. But later I found out that because the project is outside our Nunavut settlement area, they could never win the case, so their lawyers advised them not to take on the case,” Natanine said.

At the same time, Clyde River did get some “nominal funds” from QIA, Natanine said.

That early disappointment, however, is now tempered with gratitude, Natanine said, because it allowed Clyde River to build a relationship with Greenpeace.

“It involved not just a relationship, but in Clyde River it involved healing with the hamlet council, the hunters and trappers, and we had to deal with this issue of hatred towards Greenpeace and all these negative things,” he said.

“Now I’m grateful that we were able to befriend Greenpeace.”

In 2011, a consortium of Norwegian companies operating under the name MKI proposed the seismic testing plan in a project description filed with the NEB.

Under their proposal, a ship would drag a floating airgun array throughout the Canadian side of Baffin Bay and Davis Strait each summer for five years.

The airgun equipment would blast the water with loud explosive noises, generating vibrations under the seabed that would be measured with digital equipment located on board the vessel.

The group of companies, who operate out of head offices in Oslo and Houston, have in the past done similar work around the coast of Newfoundland and Labrador, and other coastal regions.

Following their seismic program, the consortium would have sold their data to oil and gas firms looking for likely places to do exploratory offshore drilling.

But Natanine said his community has not rejected development and would be willing to support projects that bring them in as partners and offer real financial benefits.

“The Inuit did not close their door to these companies. They were extremely gracious hosts,” Nader Hasan, Clyde River’s lawyer said.

But the seismic testing proponents could not answer basic questions about potential harms that could be inflicted on sea life and offered meagre benefits to Clyde River, Hasan said.

In its ruling, the Supreme Court said that while the NEB is capable of carrying out the Crown’s duty to consult Indigenous people, in the case of Clyde River, they did a lousy job.

“While the Crown may rely on the NEB’s process to fulfill its duty to consult, the consultation and accommodation efforts in this case were inadequate and fell short in several respects,” the ruling said.

• failing to consider the impact of the proposed testing on Inuit treaty rights and failing to assess the source of those rights;

• failing to make the Crown’s duty to consult clear to the Inuit; and

“Limited opportunities for participation and consultation were made available. There were no oral hearings and there was no participant funding. While these procedural safeguards are not always necessary, their absence in this case significantly impaired the quality of consultation,” the judgment said.

In the other judgment released today, the Supreme Court ruled against the Chippewas of the Thames First Nation, saying “the consultation undertaken in this case was manifestly adequate.”

In statements issued following the July 26 judgments, NTI and QIA each said they welcome the Supreme Court’s decision on Clyde River.