Coca-Cola and WWF team up on “Arctic Home” campaign 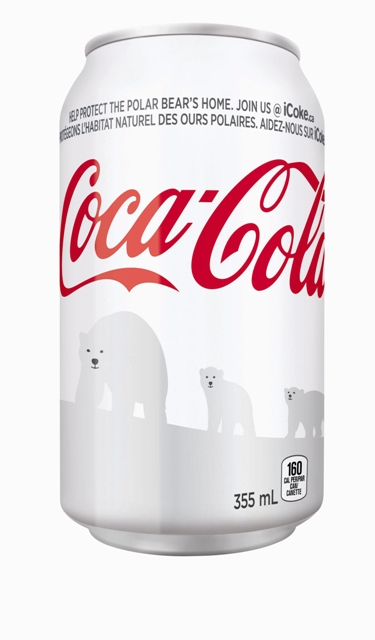 Coca-Cola has used polar bears in its advertising campaigns to show Coke is best served “ice cold”, while the bears’ antics are meant to symbolize fun and good times with family and friends. Now Coca-Cola is turning its pop can white over the holidays to draw attention to warming in the Arctic and support the World Wildlife Fund’s Arctic programs. (HANDOUT IMAGE)

This holiday season Coca-Cola will change the colour of its iconic red pop cans for a cause.

The cans will be turned white in honour of the polar bear.

The colour change is also part of a new “Arctic Home” campaign to help raise awareness and money for the World Wildlife Fund’s Arctic programs.

“The polar bear and the rugged Arctic are enduring symbols of the Canadian North. For Coca-Cola, the polar bear is especially near and dear to our hearts, appearing for decades in our holiday advertising,” said Nicola Kettlitz, president of Coca-Cola Ltd., in an Oct. 24 news release. “Arctic Home brings to life our commitment to the polar bear and sustainability, and our dedication to making a positive difference in the world.”

Coca-Cola Canada plans to contribute $2 million over the next five years to WWF’s new “Last Ice Area” plan, intended to draw more attention to Arctic areas that are vulnerable to climate change.

Through the “Arctic Home” campaign, Coca-Cola will also match Canadian and U.S. consumer donations to WWF made from Nov. 1 to March 15, 2012, up to a maximum of one million dollars.

WWF has a “longstanding partnership” with Coca-Cola based on the company’s efforts to lower their climate-warming greenhouse gas emissions and manage their water use, said Martin von Mirbach, the director of WWF’s Arctic program, in an interview from Iqaluit, where he is an observer at this week’s international meeting on polar bear conservation.

“They’re a climate-saver company,” which already use polar bears in advertising campaigns, von Mirbach said. “So there was a natural fit.”

With money raised through the campaign, WWF will work on its conservation plan for the area of High Arctic ice, which is predicted to persist the longest in the face of climate change, he said.

That area, dubbed the “Last Ice Area,” will offer a future to the polar bear and meet the needs of Inuit.

WWF is working with the Inuit Circumpolar Council and other Inuit organizations in Canada and Greenland on the “Last Ice Area” concept to gain “their support and active leadership” for the plan, Mirbach said.

The plan “recognizes and acknowledges that development will take place,” Mirbach said.

The idea is to draw attention to vulnerable areas and look at the “wide variety of federal legislation that can encourage conservation.”

“We’re saying scientists have identified these areas as likely to have a high conservation interest in the future,” Mirbach said.

And WWF hopes the “Last Ice Area” will encourage people in the Arctic and world-wide to start discussing the next steps to plan for that.