The Northwest Passage in competition? No such thing. 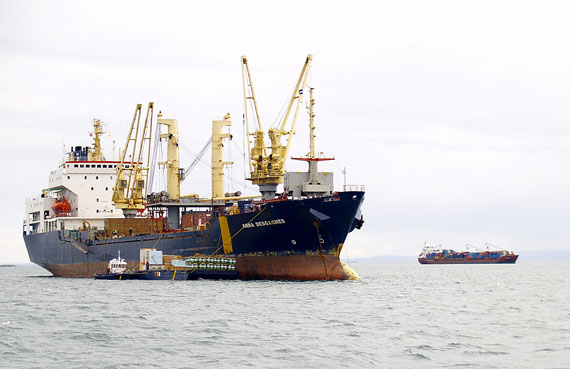 These cargo vessels anchored in Frobisher Bay near Iqaluit exemplify the kind of destinational shipping that could give rise to more employment and wealth-creation in Arctic Canada. (FILE PHOTO)

France’s ambassador for polar affairs, Michel Rocard, recently suggested that Canada has given up on the competition with Russia to attract commercial shipping into the Arctic. In fact, there is no such competition, nor has there been one.

Still, the ambassador got a rise from Canadians, among them the editors of the Globe and Mail, whose comment was “Canada in danger of missing the boat in the Arctic” (August 29, 2011). The worry is that sustainable development and jobs in Canada’s north will suffer if we fail to make the Northwest Passage competitive with Russia’s Northern Sea Route for international shipping between ports in the north Pacific and north Atlantic. The worry is misguided.

Canada and Russia manage their Arctic waters very differently. Russia accepts large icebreaking and related expenses in order to induce a growing volume of inter-ocean traffic along its Eurasian shores. These expenses are to be recovered by transit fees, principally from China, when things get going on the Route.

Canada, for its part, transfers the chief costs of shipping in the Passage directly to the ship owner. He must pay the price for hull strengthening in order to be able to move safely and independently, and not turn back, when difficult ice conditions are encountered in the Archipelago. Although we levy no fee for the use of our Arctic waters, we are definitely not in the business of inducement. Transiting vessels are advised not to rely on Canadian icebreaker support except in case of distress.

In the 2011 shipping season, Russia expects some 15 cargo vessels to make use of the Route. Transport Canada anticipates two cargo traverses of the Passage. As these numbers make clear, it’s still early days for Arctic transit navigation. Should we nevertheless change our ways and now compete with Russia for new traffic? I think not.

Some observers cite the northern job potential of transit shipping in the Northwest Passage. Actually the potential is slight when the whole idea in an Arctic inter-ocean transit is for firms to save time and money by voyaging more rapidly than they can on an alternative route. These firms will be governed by incentives not to stop and otherwise get involved along the way in the Passage. They will leave few jobs in their wake. What then of transit shipping as a means of sustainable northern development?

To be sustainable, foreign use of the Northwest Passage must be profitable for Canada. Aside from low operating costs, transit fees are key to profitability. They will be hard for us to collect because the Passage is and will remain at a disadvantage relative to other routes.

The appeal of Arctic Canada is principally for voyages between ports in the north Pacific and along the northern part of the eastern seaboard of the United States. The volume of container and bulk cargo shipping that Canada might tax is limited to begin with.

Add new Canadian transit fees, and the Passage becomes less alluring when compared with other routes, including the Panama Canal, which is now being overhauled to handle larger ships.

Meanwhile and counter to intuition, global warming serves to make island-locked Canadian sea ice relatively old, therefore harder and more lethal to shipping and, consequently, more costly for commercial vessels to cope with than the thinning ice out in the Arctic Ocean during the shipping season. This will be the case for years.

To cap it all, the long-term future for inter-ocean Arctic container shipping may lie with independent navigation following a toll-free course near to the North Pole, in which case Canadian investment in the Northwest Passage as a fee-based route could prove futile. Variations of Russia’s Northern Sea Route are already moving north towards the Pole.

Arctic transit shipping holds little promise for Canada. Leaving Russia to induce new inter-ocean traffic as it sees fit, we should continue to steer clear. But this leaves us with the issue of shipping as it relates to northern development. Fortunately, we have an alternative. It’s been there all along.

In my view we ought now to encourage destination shipping. This is principally shipping from and to natural resource sites in Arctic Canada. Ottawa should provide destination shipping inducements in the form of tax write-offs for Canadian companies wanting to build new mines, roads, harbour facilities and polar shipping capacity for the exploitation of our Arctic hard mineral and natural gas reserves. These inducements would also create new opportunities to ensure environmental responsibility.

Destination and not transit shipping is the reliable route to enhanced employment and revenue for Arctic Canada. Taking it, we may find ourselves dealing with Russia in new ways. As joint stewards of resource development in a region where physical interdependence makes everyone vulnerable, we may even learn to cooperate preventively against the next oil spill.

Franklyn Griffiths is co-author, with Rob Huebert and P. Whitney Lackenbauer, of “Canada in the Changing Arctic: Sovereignty, Security and Stewardship,” to be published next month by Wilfrid Laurier University Press.