Construction on Nunavut mine’s second road to start next month 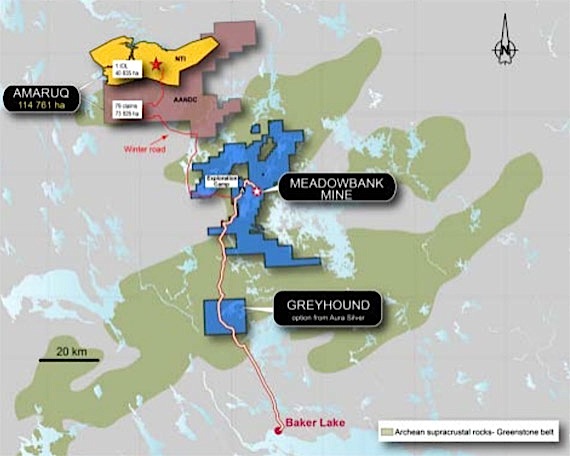 This image shows the all-weather road that currently runs between Baker Lake and the Meadowbank mine site, along with a proposed second road from Meadowbank to Agnico Eagle’s Amaruq site. That second road is set to be constructed this year. (IMAGE COURTESY OF AEM)

Agnico Eagle Mines Ltd. will move ahead with plans to construct a new all-weather road in Nunavut, this time from its Meadowbank Mine site to its nearby Amaruq exploration camp.

The new, single-line road will help the mining company beef up exploration at its Amaruq site, which has the potential to extend Meadowbank’s lifespan well past its current end date of 2018.

Construction on the first phase of the new 64-kilometre road is expected to begin in February 2016: a 16.8 km stretch of road that will run from the mine site to its Vault area.

The second phase, a 47.4 km stretch, will be constructed next winter and be completed in early 2017, the company said.

Agnico Eagle has put out a request for proposals in two parts, to allow firms who don’t currently have equipment in Baker Lake to explore the second construction phase ahead of time, the company said.

A third RFP has gone out for the construction of nine bridges. The road would allow for the transport of staff, fuel and equipment to and from the Amaruq site.

The Nunavut Impact Review Board gave the all-weather road the go-ahead late last fall, but re-issued a set of terms and conditions for Agnico Eagle.

This road will be the second major one linking to Meadowbank; the first is a 110-km all-weather road that runs between Meadowbank and Baker Lake.

Agnico Eagle began exploration at the site in 2013, located about 50 km northwest of the Meadowbank site, on Inuit-owned land.

According to the company’s latest estimates, the Amaruq site holds some two million ounces of gold, and hopes to transform the area into a satellite open pit connected to Meadowbank.

Agnico Eagle reported last summer that it had found high-grade samples at the site that “exceed our expectations.”

“While it is still at an early stage of exploration, in less than two years, the Amaruq property has advanced from a grassroots discovery to a project that now hosts a significant and growing inferred gold resource,” Sean Boyd, Agnico Eagle’s CEO, said at the end of last summer.

Most of that is based on work at a promising deposit on the Amaruq property called Whale Tail.

Agnico Eagle hopes to update and report their mineral resource estimate at Whale Tail by mid-February.

As it stands, the Meadowbank mine and mill, which started up in 2010 to become Agnico Eagle’s biggest gold producer, is expected to produce gold bars until the third quarter of 2018.

Agnico Eagle signed a deal with Inuit organizations last summer for its second gold mine in the territory, Meliadine near Rankin Inlet, but has yet to announce plans about when it will launch the mine.