How the GN’s minders shape the information you receive 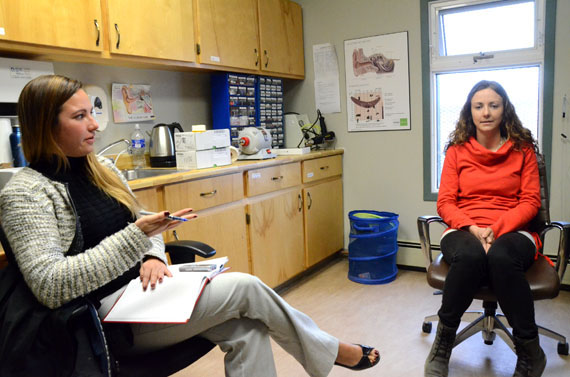 A new piece of technology could now make it easier for the health system to detect hearing problems among Nunavut residents.

But you won’t hear about it in Nunatsiaq News — for a while at least.

An audiologist is an expert specialist who identifies and treats hearing problems.

But the Government of Nunavut would not permit this expert to do an interview unless a Department of Health communications minder sat in the room to oversee Hurley’s responses to our questions.

Nunatsiaq News refused, on principle, to carry out an interview while the government minder was in the room.

The federal government’s control over its public servants is notorious, but it now appears that other jurisdictions, especially Nunavut, are following suit.

News outlets based in Iqaluit say it’s now more common for GN communications staff to not only demand that questions be submitted in advance, but also to sit in on media interviews with government employees.

But journalism experts disagree, saying it amounts to censorship.

It also means the public are not getting the full story anymore. And that’s bad news for Nunavummiut.

On July 29 at the public health building in Iqaluit, Hurley invited Nunatsiaq News into her office, accompanied by Audrey Lemieux of the GN’s health department.

When Nunatsiaq News asked Lemieux to leave, she refused.

“This is part of my responsibility and duty as a communications and social marketing analyst. To be there when we have a specialist for interviews. Especially for frontline people,” Lemieux said.

Lemieux said it was Hurley’s first interview as a GN employee.

Nunatsiaq News asked Lemieux if she was there to censor the audiologist.

“I’m here to make sure at the same time you are expressing facts,” Lemieux responded, addressing Hurley, “And not necessarily your opinion.”

When asked if Lemieux would ever intervene during a media interview, she said if Hurley expressed some opinion, “maybe this gets too personal.”

“And then I’ll say we are reporting facts and the opinion can be done, if you want to interview her regarding her thoughts or something, it can be done with her later,” Lemieux said.

Later on Lemieux said: “If she’s saying a political opinion there’s no purpose to have it in this article,” she said.

In an email exchange with Nunatsiaq News, the acting director of communications for the GN, Denise Grandmaison, said having communications people present during media interviews “is not unheard of.”

Grandmaison couldn’t say if it’s now an explicit rule that communications people must monitor all media interviews with GN workers. She said it’s up to each department.

“That being said, this practice varies from one GN department to the other,” Grandmaison, said.

Nunatsiaq News emailed all GN communications staff members, asking if it’s customary to sit in on interviews, but they all referred the question to Grandmaison, who answered on their behalf.

She said communications people record interviews to ensure accuracy, and gave other reasons why they sit in on media interviews.

“In the past, some departments have had issues with misquotes, which they were able to get corrected because exchanges between the journalist and the interviewee were recorded,” Grandmaison said.

“Also, there are times when spokespeople are not entirely comfortable when giving an interview and having a communications person present helps put them more at ease,” she said.

This kind of media minding is now standard procedure.

Kent Driscoll, a journalist with the Aboriginal People’s Television Network, has been reporting in Nunavut since 2006.

He said having a GN communications person sit in on interviews is now “incredibly common.”

“It’s really the rule, not the exception,” Driscoll said.

“I once had a GN media minder interrupt a nutritionist, to tell her things he thought should be in the interview,” he added.

“I mean, the media guy isn’t a nutritionist, and the questions were about nutrition. Why is he talking?”

Driscoll said the practice is a “return to form” from when Paul Okalik, now the GN’s health minister, was premier from 1999 to 2008.

“When Paul Okalik was premier, that heavy-handed media minder presence happened all the time. While under Eva Aariak, they at least tried to look more responsive,” Driscoll said.

“I think that under [current Premier Peter] Taptuna, it is closer to the Okalik model than the Aariak one.”

Driscoll said he once used his wife on camera to illustrate how a new government identification card machine worked in Nunavut.

The GN showed up at his television shoot with their own camera to record him recording his wife.

“What on Earth did they think was going to happen? We were filming my wife getting her ID photo taken, we only showed the back of the GN employee’s head. It was insane. It had an aura of a Monty Python sketch to it,” he said.

He said he’s not aware of GN communications people actually interfering during broadcast interviews, but they do seem to be getting in the way more and more.

“I think we’re dealing with communications people more than we used to. Yes, absolutely,” Nagle said.

“It is, at times, more difficult to get interviews with people because there’s more of a hierarchical process of attempting to arrange for an interview and book the time, Nagle said.

“Many years ago it was simply the case of being able to call the person who worked in government and that’s changed a lot over the course of the years,” he said.

So what’s the practice in the other two territories?

In the other two northern territories, governments don’t seem to have hard and fast rules.

Marcelle Dubé, a communications and social marketing analyst with the Yukon government, said she doesn’t feel it’s necessary all the time.

“I think it depends. Not typically. Normally the person who is going to be answering the reporter’s questions knows their stuff, right? I mean, it’s their area of expertise,” Dubé said.

“If they’re not comfortable, we’ll be there for silent support,” she said.

Dubé said the Yukon government gets many media requests, and “there’s no way we can sit in on all the interviews.”

For the Northwest Territories, Damien Healy, the communications manager for the GNWT’s Department of Health and Social Services, said he typically sits in on “some interviews, not all.”

But he did say it happens frequently.

You can read the second part of this two-part series here.