Controversial film “Of the North” gets revised: it’s now blank

Distributor says, “we don’t know if it’s a kind of joke, or if it’s serious” 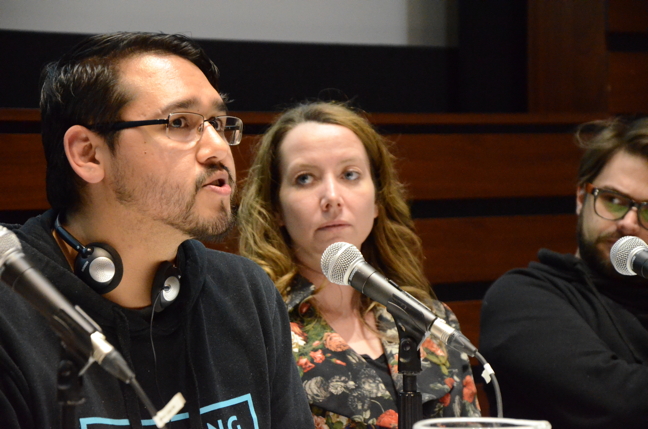 Stephen Puskas, a Montreal-based Inuktitut radio producer, speaks out during a roundtable discussion on the film “Of the North,” at Concordia University March 16. Beside him are fellow panelists Marie-Pier Boucher and Mathieu Grondin. (PHOTO BY DAVID MURPHY)

MONTREAL — Dominic Gagnon’s controversial film of the North has gone black — at least for now.

Gagnon has reportedly replaced the compilation of Internet videos he mashed together to make of the North with 74 minutes of total blackness, and silence.

“Yeah, it’s true, for now,” said Denis Vaillancourt of Vidéographe, the company that distributes the film.

Vaillancourt, the distribution coordinator for Vidéographe, said he doesn’t know whether the new blacked-out version of the film will be shown in upcoming scheduled screenings throughout Europe.

“For now I know the black version. But I sent an email to Dominic yesterday and I’m waiting for some answers because most of the people want to know what’s going on with it,” Vaillancourt said.

Vaillancourt said Vidéographe had told Gagnon they didn’t want to show the film anymore and Gagnon agreed to change it.

“He came with a new version, a black one. We’ve been waiting for it because we don’t know if it’s a kind of joke or if it’s serious,” he said.

Vaillancourt told Nunatsiaq News they were reluctant to show the previous version because of numerous complaints they’d received from Inuit who said it was offensive.

He also said that Gagnon didn’t have the “rights” to show the film since it contained some video and audio clips that he never gained permission to use.

More details of the film, and its impact on the Inuit community and beyond, came to light March 16 during a roundtable discussion at Montreal’s Concordia University.

Stephen Puskas was part of that roundtable.

Puskas, who started a petition against the film in January that now contains nearly 1,500 signatures, said owners of some of the internet videos contained in Of the North have requested about 40 clips be removed.

“I actually made an Excel sheet from the credits and found most of the videos on YouTube. I contacted as many people as I could,” Puskas told a crowd of about 80 people who attended the Concordia discussion.

“Now we know Dominic doesn’t have the rights for that. So now if we keep going with this version, we are guilty I guess. That’s why we don’t want to show it anymore,” Vaillancourt said.

At the March 16 discussion, Inuk filmmaker Alethea Arnaquq-Baril spoke about some of those video clips in question.

“We cannot even begin to discuss the artistic and cultural merits of this film without first acknowledging that it’s immoral to make or show a film that contains graphic shots of [a] naked body and her vagina without her consent. Period,” she said.

That scene is one of many in the film that depicts negative images of Inuit, argued Arnaquq-Baril. Other scenes purport to show Inuit vomiting, being drunk and acting violently.

“Watching the film, I felt so bored of what the content was,” said Inuit panelist Heather Igloliorte, assistant professor of Indigenous art history at Concordia.

“These are the stereotypes and the painful imagery and the misinformation that circulates about Inuit people that does have a powerful effect on our life,” Igloliorte said.

Gagnon, who was not at the roundtable, has insisted through media interviews that the clips were already public and readily accessible on the internet and that the film is not racist.

Musician Tanya Tagaq thinks the film is racist and was furious because Gagnon used her music in his film without permission.

“It felt like a lot of the racism I’ve experienced in my life,” said Puskas.

“A lot of the things people would say to me or expect of me as an Inuk, it was shown as if it were reality,” he said.

The controversy has left many film festivals, whose job it is to provide a venue for young, contemporary filmmakers, torn over whether to respect Inuit wishes and pull the film or to promote freedom of expression and screen it anyway.

Last February, of the North was pulled from the Rendez-vous du cinéma québécois festival, for example, but the screening at the First Look festival in New York City went ahead.

As recently as March 7, Ciné-Club LaBanque in Montreal pulled its screening and subsequent discussion of the film due to alleged “threats against Dominic Gagnon.”

Only two people agreed to defend Gagnon’s point of view out of the 40 invited to the roundtable discussion, according to assistant professor of Film Studies at Concordia University Ezra Winton.

One of them was filmmaker Mathieu Grondin, who co-signed a letter published in the Quebec magazine Voir denouncing censorship of the film.

Speaking French for most of the discussion, Grondin said the film made him “question my own view of culture and art.”

Later in the evening Puskas pointed out that Gagnon received a research grant from the Conseil des arts et des lettres du Québec for the film.

But Grondin responded by saying that grant was given to make art — and “not scientific research.”

One woman in the audience described how Gagnon goes to film festivals and speaks about Inuit “as if he was a kind of expert,” and that this is a “crisis situation.”

She also said the film is powerful as evidenced by how much attention it’s receiving.

Arnaquq-Baril said she contemplated not speaking out against it and instead, “letting the film die a silent death.”

“It was a really painful decision to make. And I still don’t know if it was the right choice. Because we have to be traumatized further in order to question it. And we have to give the film more power by questioning it,” Arnaquq-Baril said.

“You either let the racism perpetuate or you question it and give this horrible film more importance in the history of documentary filmmaking than it deserves.”