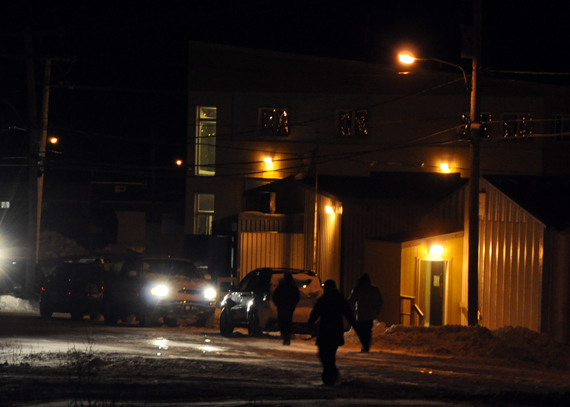 Kuujjuaq residents stop by their local co-op to pick up some wine or beer on their way home from work. (PHOTO BY SARAH ROGERS)

KUUJJUAQ — On a cold Wednesday evening, there’s a steady stream of cars and snowmobiles parked outside Kuujjuaq’s co-op store.

Drivers leave their engines running while they enter the store and exit minutes later with cases of beer, and less often, tetrapacks of wine.

It’s been almost a year since the co-op restored beer and wine sales from its Kuujjuaq store, for the first time in 17 years.

By all appearances, business is good.

But the convenience of buying something to drink on your way home from work has also brought anxieties to some residents of Nunavik’s largest community.

“I get a lot of calls about this,” said Jennifer Watkins, who sits on the executive committee of the Kativik Regional Government’s regional council. “This is a community concern, but we have two split mentalities concerning the sale of alcohol.”

A number of Kuujjuammiut say they are happy to have the retail service; another group say the easy access to alcohol is fueling crime and substance abuse in the community of 2,200.

At a regional council meeting Feb. 26, the Kativik Regional Police Force presented its quarterly crime statistics for each Nunavik community.

“We seem to get more calls earlier in the day, but we can’t say it’s related to those alcohol sales,” MacKinnon said.

MacKinnon said the co-op’s sales do seem to have cut down on bootlegging in Kuujjuaq, although the community has generally seen less bootlegging than elsewhere in Nunavik.

With more than $250,000 in illegal alcohol seized by police across the region last year, MacKinnon said bootlegging remains a major issue in Nunavik.

To help break the trend, the KRPF has changed how it deals with bootleggers.

In the last three months of 2013, KRPF officers made major alcohol seizures in Salluit, Kangirsuk, Quaqtaq and Kangiqsujuaq.

And rather than pressing charges under provincial legislation, officers applied municipal bylaws.

“The use of by-laws allowed the alcohol to be seized immediately,” MacKinnon said, “and although the fines are not as high as if the charges are based on [Quebec’s law on alcohol infractions], the result is much quicker.”

That’s because charging a person would require an investigation and evidence in order to have them prosecuted.

Each Nunavik community has a bylaw on how much alcohol is allowed in the community, so the rules are clear, MacKinnon said.

“A lot of complaints we receive are from people saying ‘this person is selling, can you stop them,’” she said. “This is more immediate.”