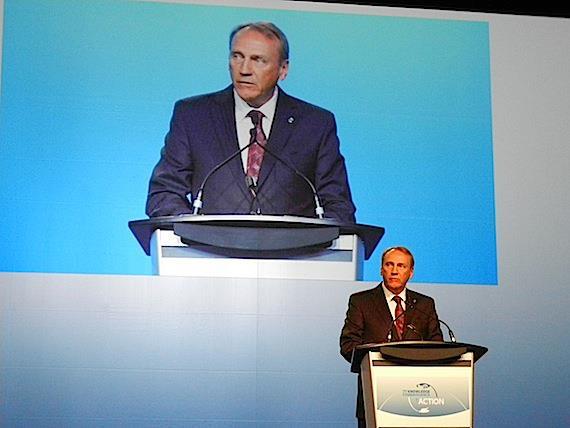 Aboriginal Affairs and Northern Development Minister John Duncan reaffirms his government’s commitment to the Canadian High Arctic Research Station in Cambridge Bay during his speech to the April 23 official opening of the International Polar Year conference in Montreal. Duncan also said that Canada plans to strengthen the Arctic Council when it assumes the chair of the circumpolar body in 2013. Duncan also said the “spirit of partnership and collaboration” will make the North stronger and more dynamic. (PHOTO BY JANE GEORGE)

Government media minders are being dispatched to an international polar conference in Montreal to monitor and record what Environment Canada scientists say to reporters.

The scientists will present the latest findings on everything from seabirds to Arctic ice and Environment Canada’s media office plans to intervene when the media approaches the researchers, Postmedia News has learned.

Media instructions, which are being described as a heavy-handed attempt to muzzle and intimidate the scientists, have been sent to the Environment Canada researchers attending the International Polar Year conference that started on Sunday and runs all week.

“If you are approached by the media, ask them for their business card and tell them that you will get back to them with a time for (an) interview,” the Environment Canada scientists were told by email late last week.

“Send a message to your media relations contact and they will organize the interview. They will most probably be with you during the interview to assist and record,” says the email obtained by Postmedia News.

The memo, signed by Kristina Fickes, an Environment Canada senior communications adviser, goes on to say that recordings of interviews are to be forwarded to the department’s media relations headquarters in Ottawa. Fickes signs off with a signature tagline that says: “Let the sun shine in.”

Mark Johnson, an Environment Canada spokesman, says there is nothing unusual about the plan, which he describes as “standard practice” and consistent with the government’s overall communication policy.

Others see it as the latest evidence of the warped culture of obsessive information control inside the Harper government.

“Until now such a crude heavy-handed approach to muzzle Canadian scientists, prior to a significant international Arctic science conference hosted by Canada, would have been unthinkable,” says a senior scientist, who has worked for Environment Canada for decades. He asked not to be identified due to the possibility of repercussions from Ottawa.

“The memo is clearly designed to intimidate government scientists from Environment Canada,” he says. “Why they would do such an unethical thing, I can’t even begin to imagine, but it is enormously embarrassing to us in the international world of science.”

There is growing concern in many quarters about what is being viewed as the government’s excessive information control.

Last week, the Ottawa Citizen reported how a reporter’s simple question about a Canada-U.S. study on snow generated a blizzard of paper at the National Research Council.

While a NASA scientist was free to pick up the phone and answer questions in a simple 15-minute interview, the NRC declined to let anyone speak with the reporter about the snow study. Instead 11 people in the Canadian agency eventually produced a list of equipment used in the study — information of little use in the story.

Environment Canada’s media office also often takes hours if not days to answer reporters’ questions, and to decide whether interviews will be granted.

Johnson took more than four hours Sunday to respond to a question about why Environment Canada wants to record interviews with its scientists, saying by email that the department maintains “a record of interviews in case of discrepancies.”