Iqaluit DEA considers rejigging which grades get taught where 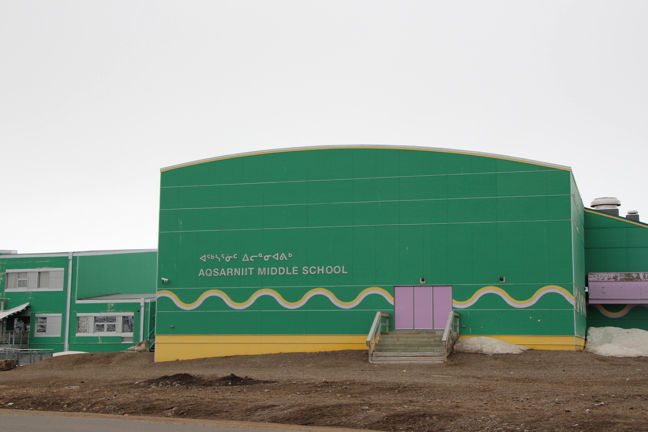 To eliminate overcrowding at Iqaluit schools, the Iqaluit District Education Authority is thinking of consolidating kindergarten to Grade 2 at one elementary school and Grade 3 to Grade 6 at another and then putting Grade 7 to Grade 9 at Aqsarniit Middle School and Grade 10 to Grade 12 at Inuksuk High School. (PHOTO BY BETH BROWN)

Packed classrooms have the Iqaluit District Education Authority looking for new ways to organize which grades attend the four schools under its mandate.

The IDEA suggested during its annual community consultation meeting, May 29, that the Department of Education throw out the catchment model in Iqaluit’s two elementary schools.

The catchment system means students attend a school based on where they live.

The meeting, held in the Nakasuk Elementary School library, was the first time the IDEA had publicly shared the notion of rearranging grades, although IDEA chair Doug Workman said the change has been discussed for a year.

The new set-up would see all students from kindergarten to Grade 2 attend one school and students in Grade 3 to Grade 6 attend the other, Workman told Nunatsiaq News.

“Generally speaking students that live in the Plateau, in the downtown core and towards the beach and in Happy Valley go to Nakasuk Elementary School for kindergarten to Grade 5 and students from Tundra Valley and Road to Nowhere area go to Joamie [Elementary] School,” he said.

But the current system can’t accommodate the rapid growth in the number of Iqaluit students, said Workman.

“We’re short school space and we’re not likely to get a new school in Iqaluit in the next five to 10 years,” he said.

Workman said portable units are an option but the IDEA is looking for more than short-term fixes.

“We’re trying to maximize what we do have,” he said. “The catchment idea may have more of a long-term solution.”

Such a change however could mean many young children would travel further to school, exasperating Iqaluit’s current challenge of overcrowded school buses.

Workman said a parent emailed the IDEA prior to the meeting to make sure the school bus shortage appeared on the agenda for its annual meeting. Iqaluit has six school buses.

“We’ve heard from parents that the buses are full,” said Workman. “We’re hearing the number of three to a seat. We’re not sure if that’s the safest for our children.”

Members of the IDEA also told people at the sparsely attended meeting that the organization wants the education department to change a formula used to decide its student educator ratio. This ratio is used to decide how many teachers a school needs.

Now, administration and support staff such as principals and counselors are considered as teachers in the ratio formula, even though they don’t teach classes, said Workman.

“They have a different role than teaching children directly and shouldn’t be included in the calculation,” he said.

Workman said the IDEA told people at the meeting about plans to lobby for more support for students with specialized learning needs. He said for students who need tailored work plans, the current assessment process is complicated and takes too long.

Workman’s report for the community consultation included a May 17 agreement made between the IDEA, the Commission scolaire francophone du Nunavut and the Government of Nunavut to bring Grade 9 students from École des Trois-Soleils to Inuksuk High School. In exchange for the space, the IDEA is able to group those students in its student educator ratio. The agreement, which followed court action, also stemmed from lack of classroom space at Nunavut’s only French school.

For Workman, the meeting was also a chance to gauge public opinion on upcoming changes at Aqsarniit Middle School. The school will see new metal siding and protective windows installed to increase safety.

“There’s been a lot of vandalism in that area of the community,” said Workman.

The IDEA wants input on two colour schemes considered for the siding, which is currently bright green. Workman said an IDEA Facebook survey will allow members of the public to vote on either a dark green or dark blue pattern.

Workman said the new scheme, like the current siding, will likely include a wave pattern that evokes aqsarniit, the northern lights.